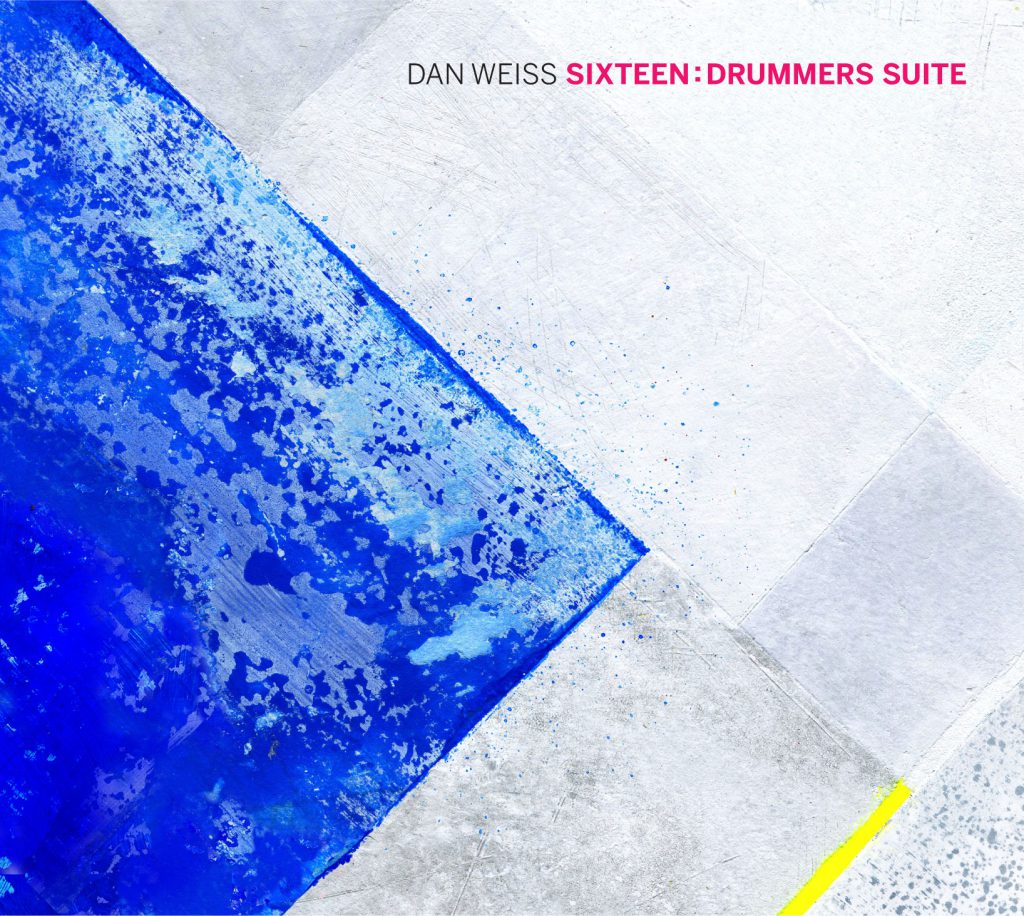 Sixteen: Drummers Suite is the highly anticipated follow-up to Fourteen, drummer/composer Dan Weiss’s brilliantly ambitious opus for fourteen musicians. Nate Chinen of the New York Times named it one of his top ten releases of 2014, and Peter Hum in the Ottawa Citizen called it “a blazingly creative effort. Ultimately, its audacious and unconventional success is uplifting, a testament to whats possible and what can be imagined.” Sixteen is even more daring: The ensemble is now comprised of sixteen musicians, featuring drums, acoustic bass, guitar, piano, synthesizer, three saxophones, two trombones, tuba, flute, three voices, harp, glockenspiel, organ, vibraphone, tabla and percussion, giving the work even greater sonic scope. Like on Fourteen, the work is an unique amalgam of jazz, Indian music, prog rock, contemporary classical music, and other completely idiosyncratic influences, all woven by Weiss into a completely sui generis musical tapestry.

Weiss started composing Sixteen immediately after the completion of Fourteen, which had whet his appetite for further exploration of different orchestration concepts and use of a greater tonal palette. The work is particularly influenced by the composers Iannis Xenakis and Per Nrgrd, whose works Weiss was studying. Around the same time he was analyzing an Elvin Jones comping rhythm from a video he found on Youtube of the John Coltrane Quartet performing the song “Vigil” at the Comblain-la-Tour Festival, Belgium in 1965, and the idea came to him to use a particular drumming passage as the basis for his composition “Elvin.” Inspired by the idea of starting his composition process with a drum pattern rather than harmony or melody, Weiss went on to meticulously transcribe specific rhythmic passages of some other of his favorite drummers: Max Roach, Tony Williams, Philly Joe Jones, Kenny “Klook” Clarke and Ed Blackwell, and utilize them as the basis of each movement of the suite. Each piece on Sixteen is built not only around these specific drum patterns but they also reflect Weiss’s imagining of the personality based on his research into the lives of each drummer. He further cross-references these personalities from movement to movement as a way of showing how they influenced one another, reflecting the nature of the drum lineage in the jazz tradition. The introductory piece “The Drummers Meet” intertwines all six drummers phrases in the context of a chakradar, a specific type of tabla composition. The source material for the other pieces are:

Weiss is one of the busiest drummers on the jazz scene. He has toured and recorded with the likes of Rudresh Mahanthappa, Greg Osby, Lee Konitz, Tim Berne, Rez Abbasi, and Amir ElSaffar, in addition to musicians such as keyboardist Matt Mitchell, saxophonists Dave Binney and Miguel Zenon, guitarist Miles Okazaki, and vocalist Jen Shyu, all of whom appear on Sixteen. Indeed, the musicians on the album, most of whom also appeared on Fourteen, are almost entirely made up of Weiss’s long-time collaborators. As much as Sixteen is an expression of his singular vision, it is also a reflection of this strong community of superb, like-minded musicians who admire Weiss’s talent and ambition and have bought-in fully to this considerable undertaking. Pianist Jacob Sacks, who has played with Weiss for over twenty years, says of him “Dan is one of the greatest musicians of our time. His endless fountain of creativity, scholarship, and camaraderie is a constant source of inspiration to me and to anyone who has ears and a heart.”

As on Fourteen, the work is through-composed and written specifically to showcase each musicians unique sound. Even with all the tricky rhythms and abrupt changes in the music that might seem unwieldy for such a large group, the musicians pull it all off with aplomb. Jen Shyu says of Sixteen: “I was most struck by how tailor-made it was for each of us. During the recording session he seemed to know exactly how it would sound. The music really shows the vastness of his imagination and is a window into how his mind works; how he is able to bring all of these influences together. For all its complexity rhythmically as well as melodically and harmonically, the music remains penetrating and lingering.” Jacob Garchik, who plays trombone and tuba on the recording said “Danny has a distinctive compositional voice, which mirrors his vibrant personality: deeply layered and complex, with humor, surprise, virtuosity, tradition, swing, soulfulness, and groove.” On Sixteen, he abstractly and beautifully translates the multi-layered styles of his drum heroes, their independent limbs to simultaneous melodies. It delights with overlapping, complimentary layers where melodic lines co-exist in different rhythmic cycles, instrumental groups, stylistic references, and sonic palates. With Sixteen: Drummers Suite, Weiss has realized another exceptional achievement, one that continues to reimagine the possibilities of what a large ensemble can do in a jazz context.