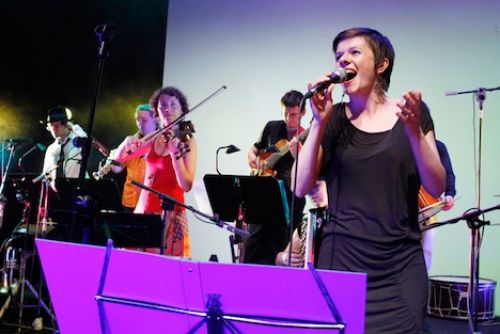 Lana Cencic (aka Lana) Is started performing at the age of three at the Zagreb State Opera House. She spent her childhood performing music and theatre, and moving from one country to the next, living in Croatia, Austria, England, Germany, and now New York City. She studied acting and dance alongside classical, jazz and Indian classical music and has released a number of albums, starred in numerous
films, television shows and theatrical productions. Lana has just released her highly praised debut solo album In Your Head by Session Work Records and continues to build her name in the New York music scene. Lana was born, into a musical family, in Zagreb, Croatia. Her father, Maksimilijan Cencic works as a conductor at the Vienna State Opera and her mother, Silvija Purcar is a former opera singer in Ex-Yugoslavia, later the vocal coach of the famous Vienna Boys Choir. Her brother, Max Emanuel Cencic is a world wide acclaimed countertenor.