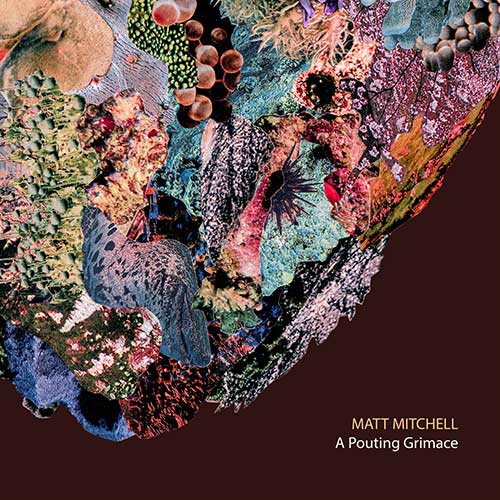 A Pouting Grimace is the audacious new release from pianist/composer Matt Mitchell, whose prior release Vista Accumulation (Pi 2015) The New York Times calls “a bold signature” that “simmers with deep intensity.” Not only is he one of the most in-demand pianists in jazz – Mitchell plays in bands such as Tim Berne’s Snakeoil, Steve Coleman’s Natal Eclipse, the Dave Douglas Quintet, John Hollenbeck’s Large Ensemble, Jonathan Finlayson’s Sicilian Defense, Rudresh Mahanthappa’s Birdcalls, and David Binney’s Quartet — he has established himself as a composer of bold distinction. Substantial in scope, the album, which features twelve musicians: five woodwinds, four percussionists, harp, bass, and the leader on piano, Prophet 6, and electronics, weaves an intricate web of off-kilter rhythms and logical frenzy. Produced by the acclaimed guitarist/composer David Torn, the work is completely beyond genre, a daring tour de force that headily mines the interstice between precision-plotted compositions and the thrill of improvisation.

Highly regarded among the jazz cognoscenti, Mitchell is a first-call for musicians seeking a pianist able to deal with the most demandingly complex material. He is a charter member of saxophonist Tim Berne’s Snakeoil, who just released their fourth album, Incidentals, and Mitchell also interpreted Berne’s compositions on FØRAGE, released earlier in 2017. He also appears on Morphogenesis (Pi 2017), the latest from saxophonist Steve Coleman, who said of Mitchell: “Matt possesses a technical command of his instrument and ear for tonal resources that only a few keyboardists in New York have. I appreciate his open and creative attitude towards music, which he never approaches in terms of categories or styles. He’s a great example of the 21st-Century musician: versed in the musical lessons of the past, present, and poised to help move the development of this music forward.” Percussionist Dan Weiss, who played on Vista Accumulation and has worked extensively with Mitchell said: “He is a rare breed of musician in that he has no leaks. His improvising is true and creative, his composing is innovative, his technique is astounding.”

The intrepid new release takes Mitchell’s music to a whole other level, featuring ensemble pieces that burst with intricate detail interwoven with solo electronic interludes. The idea was borne out of his desire to try composing music with a fresh instrumental palette, one heavy on the convoluted interlocution between the various woodwinds and percussion. Each of the group compositions is derived from a kernel of an idea – listen carefully and you can probably figure it out. While entirely plotted out, the compositions leaves room for frequent and varied layers of improvisation, all in service of the overall arrangements. Dan Weiss says of the project: “This music is very important to the lineage of composed/improvised music. The orchestral palette, harmonic nuance, rhythmic precision and complexity, and hauntingly beautiful textured melodies make this recording highly innovative and unlike anything we’ve have heard before.”

Producer Torn describes his experience: “As the project proceeded, there grew out of all-that an increasingly strong undercurrent and vivid sense of wonder, dread and simple excitement in me, even, eventually… awe: awe, in light of both Matt’s clear vision actually getting birthed into this world and our real adventure with its passage. What a remarkably rich piece of work this is, from a truly remarkable man, bending music, sound and time — so gorgeously and so necessarily idiosyncratically — in order to speak and feel true and affect thusly, as he must certainly gotta do.”

Musicians, instrumentation and exegesis in Mitchells own words: