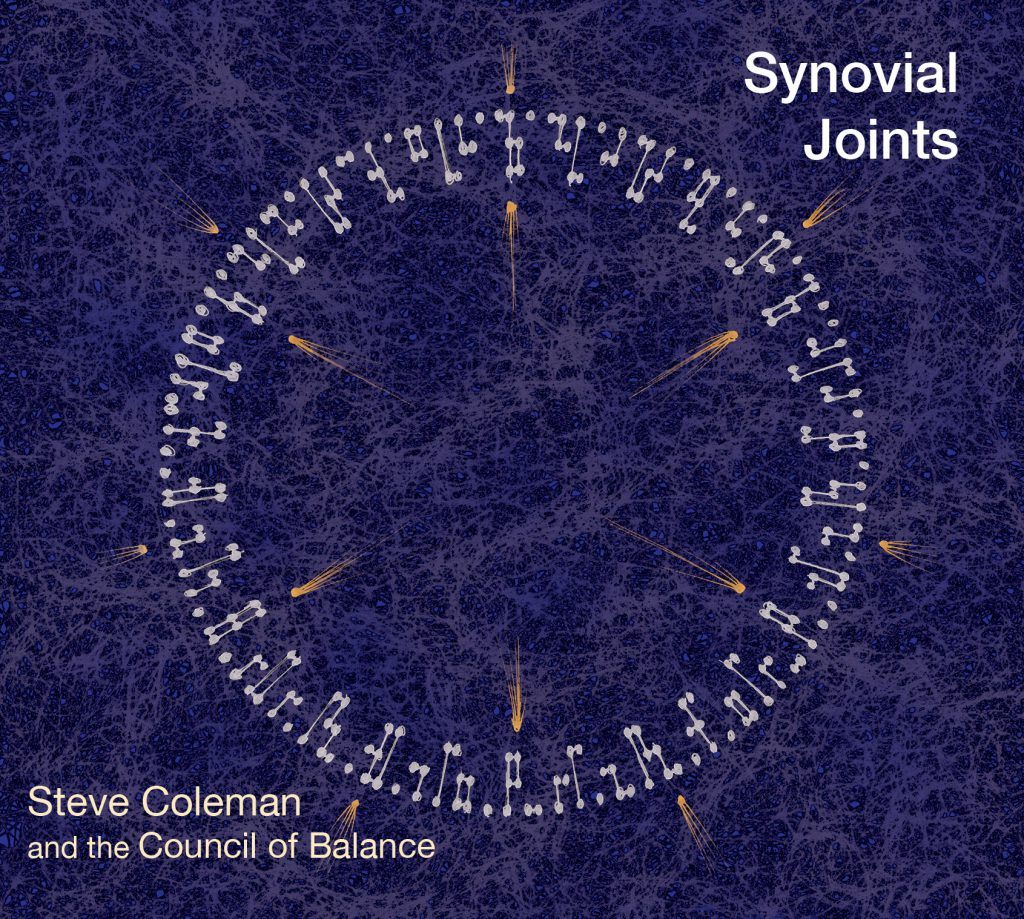 2014 was a remarkable year for alto saxophonist and composer Steve Coleman. Already acclaimed in jazz circles, he won wider recognition as the recipient of three prestigious awards: a MacArthur Fellowship, Guggenheim Fellowship and Doris Duke Performing Artist Award. This comes at a time when Coleman is at his creative peak, incorporating a lifetime of learning in African diasporic culture, ancient religions, metaphysics, Eastern philosophy and patterns found in nature into his musical methods. His influence among young artists, particularly in his approach to rhythm and his willingness to look beyond music for sources of inspiration, has never been stronger.

Synovial Joints represents the most ambitious project of Coleman’s 30-year career as a bandleader. The work was composed for a group he calls the Council of Balance, a name he has used in the past for his large-scale projects, most significantly on his 1998 release Genesis & the Opening of the Way. The new recording features 21 musicians, including many who play in his working band Five Elements: Jonathan Finlayson (trumpet), Anthony Tidd (electric bass), Marcus Gilmore (drums), and Miles Okazaki (guitar). They are joined by other musicians who are also regularly in Coleman’s nexus: Jen Shyu (vocals), David Bryant (piano), Tim Albright (trombone) and Maria Grand (tenor saxophone) who are further augmented by Latin percussionists and musicians from contemporary classical circles on strings, woodwinds, horns and percussion.

Coleman’s main objective for Synovial Joints was to investigate two novel compositional ideas: exploring different connective principals to effect musical momentum and flow, and a concept he calls camouflage orchestration. In the first, he analyzed the movement of the various synovial joints of the human body how they pivot, flex and bend, contract and relax and applied those features so that the music flows not just in a linear fashion, but with cyclical spin or rotation. In camouflage orchestration, which is inspired by the sounds that Coleman recorded in the Amazon rainforest, he pays particular attention to how instrument sounds can be distributed so that they are perceived to be in the foreground, middle ground and background, much as the layered sounds reveal themselves in the rainforest.

Coleman has increasingly come to rely on spontaneous composition in the creation of his music: It usually starts with him quieting his mind, approaching a near-trance state. He then improvises either on the saxophone and/or singing as he simultaneously beats out rhythms while sensing different memories, moods and images: shapes, appearances, energies, vibrations, movements, etc. The results are recorded and transcribed, and additional layers often also spontaneously composed are added and then orchestrated. The result is a music that he believes comes from a subconscious, less intentional, and perhaps, more sincere place.

The New York Times recently named Coleman “one of the most influential figures in the last half-century of improvised music” and, in awarding him the so-called “Genius Grant,” the MacArthur Foundation called him “Influential well beyond the scope of saxophone performance and composition, Coleman is redefining the vocabulary and vernaculars of contemporary music.” Always looking forward, Synovial Joints is further evidence that Coleman remains at the vanguard of expanding the possibilities for musical expression.