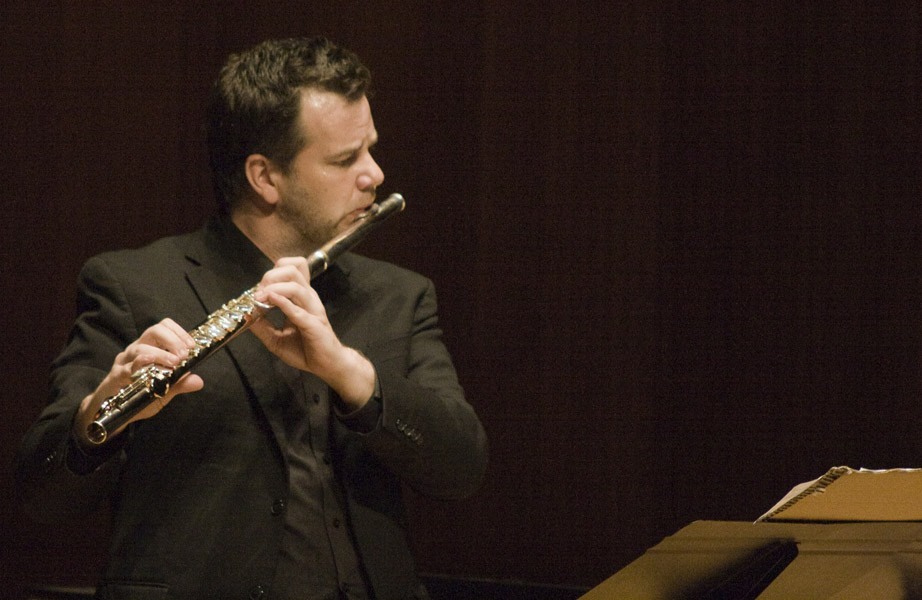 Flutist Barry J. Crawford, enjoys an active and varied career as a flute soloist, chamber player, recording artist, flute teacher, and orchestral musician. The New York Sun recently reported, “Mr. Crawford is a young musician with guts.” He found the quirky spirit of Prokofiev’s mercurial melodies and brought a robust flute sound. The Southampton Press said of his performance, “Crawford’s playing was superb. I admired his tone, his phrasing and breath control, and the joy-giving communicative quality of his playing.”

Mr. Crawford is a member of the Jupiter Symphony Chamber Players, Poetica Musica, Chamberosity, the Sedna Winds, Ensemble Pi, and the New Jersey Philharmonic Orchestra. He regularly performs as a guest artist with some of New York areas leading ensembles, including the American Ballet Theater, the Zankel Band, the Brandenburg Ensemble, Northeastern Pennsylvania Philharmonic, the Quintet of the Americas, and the Riverside Symphony. Last season, Mr. Crawford performed in major concert halls around the U.S. with the Brandenburg Ensemble, playing Bach’s Brandenburg Concerto No. 4 with flutist Tara Helen O’Connor, conducted by Jaime Laredo. The ensemble will continue the same tour next season. This season’s highlights include performances at the Bergen Festival in Norway and the Hans Christian Andersen Festival in Denmark with Poetica Musica.

Mr. Crawford was recently invited to perform in San Juan, Puerto Rico as a soloist and teacher and gave a master-class for the undergraduate and pre-college flute studios at the Conservatorio de Musica de Puerto Rico, in San Juan. He has participated in numerous internationally recognized music festivals, such as Mostly Mozart, the Lincoln Center Festival, the Spoleto Festival in Spoleto, Italy, the Octobre Musicale de Carthage, in Tunisia, the Vermont Mozart Festival, and, was a guest soloist at the Rushmore Festival, where he performed Bachs B Minor Suite under the baton of world renowned conductor/composer, Lukas Foss. He has been a featured on the McGraw-Hill Young Artists Showcase on WQXR as both a soloist and chamber player, and has also been heard on WNYC, as well as several television commercials and pop and world music recordings.

Mr. Crawford attended the Mannes College of Music where he received an M.M. and a Professional Studies Diploma and was a winner of the 2000 Concerto Competition. His teachers have included Judith Mendenhall, Samuel Baron and Tara Helen OConnor. He is currently on the faculties of the Academic School of Music, The Stony Brook Summer Chamber Music Festival, and is an affiliate artist at Sarah Lawrence College.