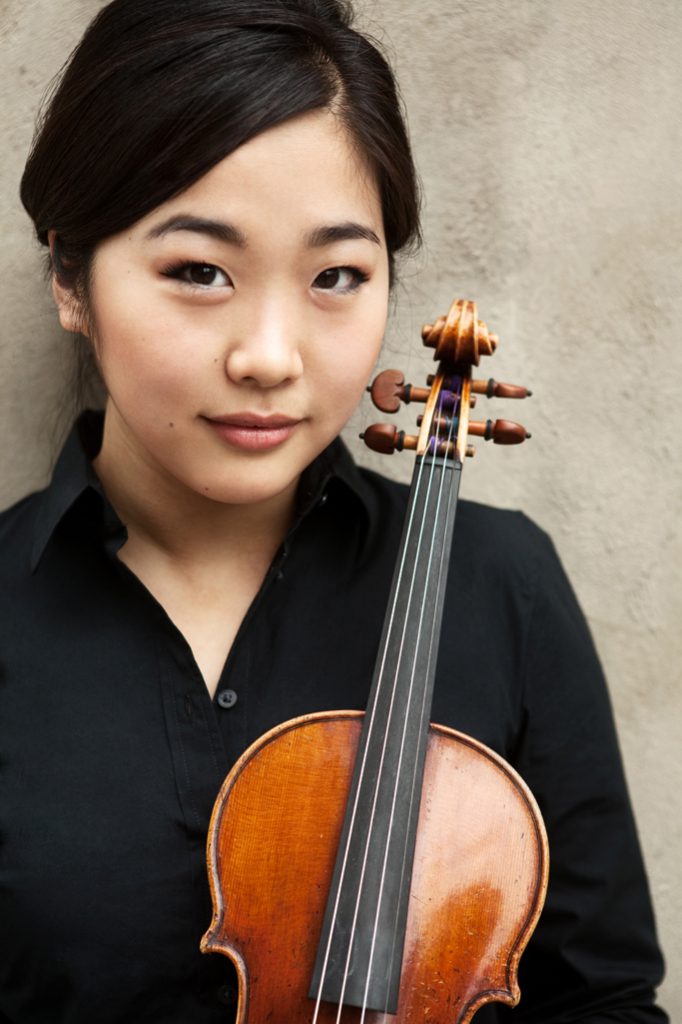 Korean-American violinist Kristin Lee has been praised by The Strad for her “rare stylistic aptness and mastery of tone and rare mood in a performer of any age.” A violinist of remarkable versatility and impeccable technique, Ms. Lee enjoys a vibrant career as a soloist, recitalist, and chamber musician, and is equally noted for her growing reputation in collaborations with various genres of music.

Upcoming engagements include debut recitals New York’s Merkin Concert Hall and Florida’s Kravis Center and debuts with the Guiyang Symphony Orchestra of China and the St. Paul Chamber Orchestra. Ms. Lee is also curating a program that premieres at Philadelphia’s World Cafe Live and New York’s (Le) Poisson Rouge, in which she is commissioning composer/performers to write music for the violin and steelpan, guitar, theremin, and carnatic South Indian singing. In the 2013-2014 season, she also toured with the Chamber Music Society of Lincoln Center in Arizona, Kansas, New York, California, Michigan, Illinois, Dresden, Germany, and Dubrovnik to Venice.

A winner of Astral Artists 2010 National Auditions and a top prizewinner of the 2012 Walter W. Naumburg Competition, Ms. Lee has appeared as soloist with The Philadelphia Orchestra, St. Louis Symphony, New Jersey Symphony, Rochester Philharmonic, New Mexico Symphony, Albany Symphony, the Ural Philharmonic of Russia, the Korean Broadcasting Symphony of Korea, and many others. She has appeared on the worlds finest concert stages, including Carnegie Hall, Avery Fisher Hall, the Kennedy Center, Philadelphias Kimmel Center, the Metropolitan Museum, Steinway Halls Salon de Virtuosi, the Louvre Museum in Paris, and Koreas Kumho Art Gallery. She has been featured on the Ravinia Festivals Rising Stars Series, and has toured throughout northern Italy. In April 2012, Ms. Lee organized a memorial concert at the Menlo-Atherton Performing Arts Center for the victims of the Oikos University shooting.

An accomplished chamber musician, Ms. Lee is a member of The Chamber Music Society of Lincoln Center, following her completion of a three-year residency as a CMS Two artist. She has appeared at the Ravinia Festival, Music@Menlo, the Perlman Music Program, Festival Mozaic, Medelln Festicmara of Colombia, the El Sistema Chamber Music festival of Venezuela, the Princeton Festival, and the Sarasota Music Festival. She is also the concertmaster of the groundbreaking Metropolis Ensemble, with whom she premiered Vivian Fung’s Violin Concerto, written for her, and which appears on Ms. Fung’s CD Dreamscapes, released for the Naxos label CD in September 2012.

Ms. Lee’s performances have been broadcast on WQXR in New York, on Bob Sherman’s Young Artists Showcase, and with guitarist Mattias Jacobsson on Annie Bergen’s The Office Hours. Other broadcasts include PBSs Live from Lincoln Center, the Kennedy Center Honors, and a guest artist performance on WFMT Chicago’s Rising Stars series. She also appeared on a nationally broadcast PBS documentary entitled PBS in Shanghai, which chronicled a historic cross-cultural exchange between the Perlman Music Program and Shanghai Conservatory.

Since her Paris-Philly Lockdown performance at the Philadelphia International Festival of the Arts, in Verizon Hall at the Kimmel Center for the Performing Arts in April 2011 with drummer and DJ ?uestlove, Ms. Lee has enjoyed a continued collaboration with the drummer and frontman for the Grammy Award-winning band, The Roots. She appears on The Roots recent CD Undun, and appeared at the Brooklyn Academy of Music (BAM) in ?uestloves experimental project entitled Shuffle Culture, which evoked iPods shuffle mode in live performance and brought together musicians such as Deerhoof, D.D. Jackson, Rahzel, and DJ Jeremy Ellis.

Born in Seoul, Ms. Lee began studying the violin at the age of five, and within one year won First Prize at the prestigious Korea Times Violin Competition. In 1995, she moved to the United States and continued her musical studies under Sonja Foster. Two years later, she became a student of Catherine Cho and Dorothy DeLay in The Juilliard Schools Pre-College Division. In January 2000, she was chosen to study with Itzhak Perlman, after he heard her perform Mendelssohn’s Violin Concerto with Juilliard’s Pre-College Symphony Orchestra. Ms. Lee holds a Masters degree from The Juilliard School, where she studied with Itzhak Perlman and Donald Weilerstein, and served as an assistant teacher for Mr. Perlmans studio as a Starling Fellow. She is a member of the faculty of the Aaron Copland School of Music at Queens College, and has served on the faculties of the LG Chamber Music School in Seoul, Korea, El Sistemas chamber music festival in Caracas, Venezuela, and the Music@Menlo Chamber Music Festival.