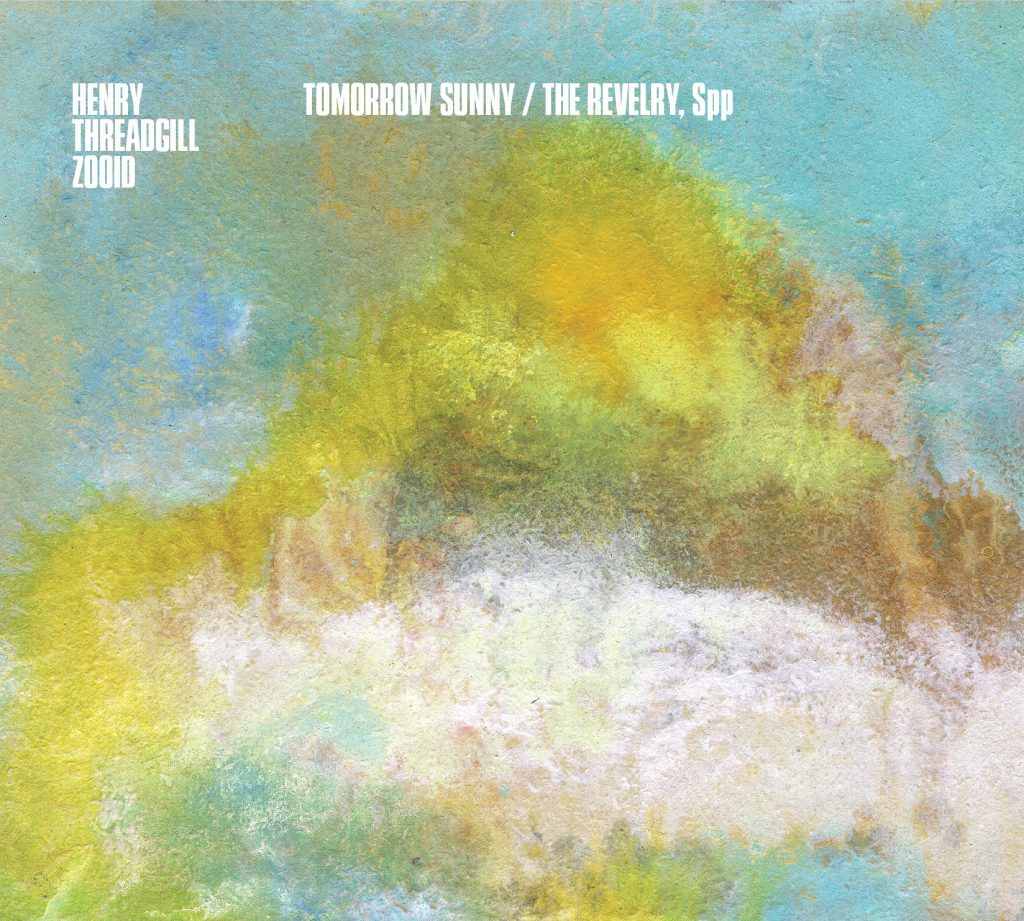 For listeners with vision loss
In an effort to make the CD more accessible to the blind, Henry Threadgill has included a track that is a recitation of all the text on the CD package. We have also made our website fully-accessible to screen reading tools. A Braille label is also available. Please indicate that you would like to get this label when you receive your order confirmation.

Jazz critic Marc Medwin, who is himself blind, speaks with Threadgill about his motivations for improving the accessibility of his latest CD. Click [HERE](/weblog/27) to read the interview.

“Henry Threadgill is my favorite composer hands down. Within Tomorrow Sunny / The Revelry, Spp, Zooid establishes a new line in the sand. They are the vanguard of counterpoint. My head nods to Threadgill just as deep as it does J Dilla. Threadgill strikes me as the most patient of improvisers: waiting for the right moment to stab a note, or send the next note sailing over the horizon. And Zooid continues to be a breathtaking vehicle for Threadgill’s terrain.” — Jason Moran

“Henry Threadgill is one of today’s most important, inspiring, and influential composer-performers. A true American maverick, Henry Threadgill continues to matter because he has elevated the act of making creative choices to a high art. His lifetime of creative exploration is characterized by a continual, systematic, and often downright radical confrontation of the fundamental building blocks of music. His compositional output is staggering, and he has covered a vast amount of ground at a very high level, responding to the necessities of every new creative setting with a laser-like focus and a brilliant sense of play. This risk-filled process has led him time and again to rich artistic rewards. As a player, Henry often reminds me of my all-time hero, Thelonious Monk. Like Monk, Henry has a composer’s approach to improvisation; his choices are not simply about notes and rhythms, but reflect a profound and purposeful overview on the shape and feel of the music. He is also someone, like Monk, who played in the church and in other contexts where one learns how to move a crowd. You can hear that communicative power when he plays; his relationship to the beat and the visceral qualities of his sound are profound and stirring. And finally, as with Monk, one hears in Threadgill’s music a unity between the compositional and improvisational languages, a sense that every element in his musical landscape reflects and somehow contains the whole, like shards of a hologram.” — Vijay Iyer

“Henry Threadgill does not fit into the category of easy listening. His imaginative compositions and unique performance practice keep the listener filled with anticipation and excitement. The new CD with Zooid, Tomorrow Sunny/The Revelry, Spp, displays a commitment to the highest quality of creative achievement. Threadgill’s music on this well produced recording is some of the best I’ve heard from him. Complex multi-voiced textures with shifting levels of density with masterful improvised solos from Threadgill and Zooid members make this a disc you would not want to be without. It is intellectually challenging, emotionally stimulating and inspires repeated listening.” — Alvin Singleton

“Tomorrow Sunny/The Revelry, Spp is a very special recording. The compositions by Threadgill are brilliant and subtle. The improvisations are tight and thoughtful. Henry has long been one of my favorite composers and improvisors. Zooid is a special group, cd is top rated!” — Oliver Lake

“I’m listening to Henry Threadgill’s new album, Tomorrow Sunny / The Revelry Spp. I love it when this happens. Always hoping for these rare occurrences. Re-consideration. Clarity. First time I heard Henry was in Spa Belgium.. 1978-79..Chapati Club. Air. Man, was that ever great! Then, a couple years later in New York with his Sextet. Olu Dara. Wow! I haven’t heard all his records…can’t keep track of everything he does…but try to check in regularly. Always inspiring. My mind is opened. I’m thinking of Louis Armstrong. Inventor. What would he have sounded like to us back then? ..at the beginning? No reference. For the first time. What was he thinking? How can we get to that? New language. Spark. Explosion. Henry has that. No compromise. He’s one of the few. Gives me hope. It IS possible. There is another way. There is a way. There is a way to get there. A way to get to that place. Re-invention. Propelled forward. Into beauty. Discovering a new plant. To remain curious and continue to be surprised. Question. Clarity. Mystery. Music. Thank you Henry.”

“At some point, perhaps heralded by a drum fill and a blast of tuba, you may just find yourself vigorously nodding along. Just keep going, because if you stop to think, the ground will have already shifted beneath your feet. Of course, that also seems like part of the point. [NPR Music], Patrick Jarenwattananon

“It’s as captivating and arresting as any of his previous works. If anything, Threadgill’s concepts are evolving. Those exhaustive mechanisms of counterpoint and improvisation are still present in “A Day Off,” but there are also new soundscapes to capture the imagination in “See The Blackbird Now” where Christopher Hoffman’s haunting cello sings as the others join the ethereal line.” [All About Jazz], Mark F. Turner

“The group functions inside a complex system with a ruling calculus of intervals and an ensuing tangle of calibrations that can make each instant of unfolding action feel pivotal and discrete Those instants flicker past like the frames in a moving image, creating a sleek machinery of plot.” [The New York Times], Nate Chinen

Henry Threadgill is finding himself in the midst of a career renaissance. His new release, Tomorrow Sunny / The Revelry, Spp is the continuation of his twelve year-long musical journey with his band Zooid, whose prior releases This Brings Us To, Volumes 1 and 2 have brought Threadgill a resurgence of critical acclaim. NPR called him “a true idiosyncratic great” and The New York Times “one of the most thrillingly elusive composers in and around the jazz idiom.” Pianist Vijay Iyer, who covers one of Threadgill’s songs on his new release Accelerando, calls him “A true American maverick, Threadgill continues to matter because he has elevated the act of making creative choices to a high art. His lifetime of creative exploration is characterized by a continual, systematic, and often downright radical confrontation of the fundamental building blocks of music.”

Threadgill was an early member of the Association for the Advancement of Creative Musicians (AACM) and has released over 30 records as a bandleader. At the age of 68, he continues to adhere to AACM co-founder Muhal Richard Abramss mantra of constant search and constant research, challenging himself to create music that defies easy explication. Pianist Jason Moran calls him “My favorite composer, hands down. My head nods to Threadgill just as deep as it does to J Dilla.”

Tomorrow Sunny showcases the continuing development of Zooid, the longest-running band in Threadgill’s illustrious 40-plus year career, which is something of a surprise given his leadership of such groups as Air, Sextett, and Very Very Circus. Zooid’s longevity is a testament to the commitment that each of its members has made to master its leaders cutting-edge musical system. Guitarist Liberty Ellman, who has been with the band since the beginning, says of Threadgill: “His current musical system is difficult to learn. To keep writing at the level that he is, and to continue to experiment with form, he needs to have a band that can get right to it. We have a lot of rehearsals in order to get the parts tight, which requires a commitment from the players that is uncommon these days.” As Threadgill himself puts it: “It’s music made through allegiance.”

Named after a biological term for a cell that is capable of spontaneous movement independent of its parent organism, Threadgill’s compositions for Zooid assign a set of intervals to each player that serves as the starting point for improvisation. The result is a contrapuntal crazy quilt that materializes with a mysterious logic. Zooid drummer Elliot Humberto Kavee describes Threadgill’s system this way: “The spaces between the notes the intervals in time and pitch are the elements that we work with in our improvisations. His system generates a constantly shifting negative space – a mutating kaleidoscope of sound, movement and emotion that moves around its own axis.” Jason Moran calls Zooid “The vanguard of counterpoint.”

Zooid features Threadgill on flutes and alto saxophone, Liberty Ellman on acoustic guitar, Jose Davila on trombone and tuba, Stomu Takeishi on acoustic bass guitar, and Elliot Humberto Kavee on drums. Newly on board and representing the biggest change to Zooid’s sound is Christopher Hoffman on cello, whose addition returns Zooid to Threadgill’s original conception of the band as a sextet. The cello gives Threadgill another voice to help flesh out the harmony and to provide more color and variations in texture and dynamics. When asked about the challenges of playing in Zooid, Hoffman, who has performed with such disparate musicians as Marianne Faithful, Umphreys McGee and Bebel Gilberto, said: “We are constantly reworking the pieces. You wouldn’t be able to understand how the piece was performed from just looking at the chart as the structure is constantly being changed. It’s as if the music is encoded into the written material and then Henry leads us through the labyrinth that becomes it’s most current incarnation. The path is never the same twice. That said, Henry is writing not only for the band but specifically for us as players. He knows what we and our instruments are capable of and he seems highly attuned as to where he can push us to expand and develop as musicians.”

The other major instrumental addition is Threadgill’s bass flute, which perhaps because it approximates the register of his natural voice, sounds eerily as if he’s singing through his instrument. Iyer says of Threadgills playing: “Henry often reminds me of my all-time hero, Thelonious Monk. Like Monk, Henry has a composer’s approach to improvisation; his choices are not simply about notes and rhythms, but reflect a profound and purposeful overview on the shape and feel of the music. He is also someone, like Monk, who played in the church and in other contexts where one learns how to move a crowd. You can hear that communicative power when he plays; his relationship to the beat and the visceral qualities of his sound are profound and stirring.” Moran has another take: “Threadgill strikes me as the most patient of improvisers: waiting for the right moment to stab a note, or send the next one sailing over the horizon. When asked to describe this music,” Henry avers: “Tomorrow Sunny… is in one sense something epic, and this is just one part of what I could best describe as species activated. …The Revelry, Spp is not a full stop, but a kind of long chain that gets broken for practical reasons; it is not conclusive.” In other words, its just another station in Threadgill’s ever evolving musical travels.