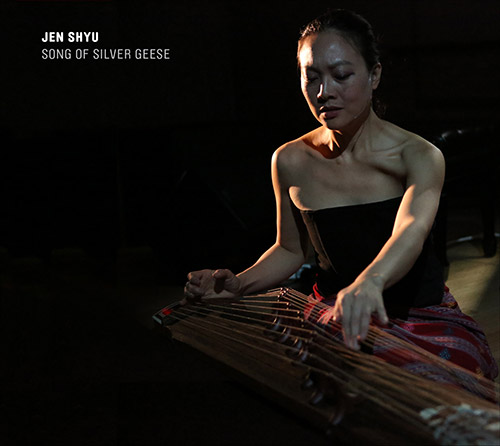 Song of Silver Geese has been included in The New York Times Best Albums of 2017. It has also received a rave 4.5 star review in the most recent issue of DownBeat.

Song of Silver Geese is the latest release from groundbreaking, experimental vocalist, composer, multi-instrumentalist and dancer Jen Shyu, whose critically acclaimed Sounds and Cries of the World was praised by The Nation and The New York Times as one of the best releases of the 2015. Named a 2016 Doris Duke Artist and voted Rising Star Female Vocalist in the 2017 Downbeat Critics Poll, NPR extols her music as “intensely personal. Nothing sounds quite like it…[It] operates in some unpatrolled border zone, blurring lines between folk song and art song, the traditional and the avant-garde, Western and Eastern, between waking consciousness and dream logic.” This is research and experience, absorbed and reimagined.” The Wall Street Journal praises, “Her voice, a wonder of technical control and unrestrained emotion, tells a story dotted with well-researched facts and wild poetic allusions. She claims both as her truths.”

Born in Peoria, Illinois, to Taiwanese and East Timorese immigrant parents, Shyu is widely regarded for her virtuosic singing and riveting stage presence, carving out her own sui generis space in the art world. She has performed with saxophonist and 2014 MacArthur Fellow Steve Coleman since 2003, singing on his critically acclaimed new release Morphogenesis (Pi 2017), and has collaborated with such musical innovators as Anthony Braxton, Wadada Leo Smith, Vijay Iyer, Tyshawn Sorey, Bobby Previte, Chris Potter, and Michael Formanek. A Stanford University graduate in opera with classical piano, violin, and ballet training, Shyu has studied traditional music and dance in Cuba, Taiwan, Brazil, China, South Korea, East and West Timor, Japan, and Indonesia, in each place conducting extensive research and submerging herself in the language, culture, history, musical traditions and rites. Her 2014 stage production Solo Rites: Seven Breaths, directed by renowned Indonesian filmmaker Garin Nugroho, and her 2017 stage production of Nine Doors, directed by Romanian director Alexandru Mihail, mark the culmination of these studies and her all-encompassing vision of ritual performance.

Song of Silver Geese is dedicated to two of Shyu’s mentors whose texts comprise the core of this piece: Taiwanese engineer and poet, Edward Cheng, who passed away from cancer in 2015, and Sri Joko Raharjo “Cilik”, a master of Wayang Kulit, the Javanese art of shadow puppetry, who died with his wife and infant son in an automobile accident at the age of 30. His six-year-old daughter, Nala, who survived the crash, is the inspiration for the central character of this work. In the narrative, Shyu imagines Nala just after the moment of impact from the tragic accident, encountering three spiritual guides who help her through her grief with messages of solace and hope. They include Timorese woman warrior Hoâar Nahak Samane Oan, who disguises herself as a man to defeat a rival king; Baridegi from Korean folklore, known as the mother of all shamans; and Chen Da, the half-blind, nomadic Taiwanese moon lute virtuoso who defined Hengchun folk song. The work’s nine compositions are conceived as a series of “Doors” that each open into its own fantastical world. This trope is partly inspired by a story Shyu encountered on the radio program This American Life, whose episode “Act One. Really Long Distance” tells the touching story about the Kaze no Denwa (Phone of the Wind), a phone booth in Japan that grievers now visit to speak to loved ones whom they lost in the 2011 Tōhoku earthquake and tsunami. This past February, Shyu met the phone booth’s owner, who gave her permission to compose music to his poetry in Nine Doors. Sung in English, Indonesian, Javanese, Taiwanese, Mandarin, Tetum Wehali, and Korean, Song of Silver Geese reflects the parallels that exist between life and death, different cultures, and the importance of empathy over the destructive assumptions that divide humanity. That it all comes together seamlessly is a testament to Shyu’s complete immersion into these art forms and the strength of her intuition and creative voice. Ben Ratliff in The New York Times calls her concerts “the most arresting performances I’ve seen over the past five years. It’s not just the meticulous preparation of the work and the range of its reference, but its flexibility: She seems open, instinctual, almost fearless.”

Ever restless, Shyu spent part of this year in Japan studying the biwa and its traditional song in addition to studying Japanese, adding to the eight languages she already speaks fluently. She is currently in West Timor delving deeply into the oral tradition of “speaking in pairs” and learning the ancient language of Tetum Wehali. After she returns to the United States, she will embark on the first leg of her SOWN / SEWN (Songs of Our World Now / Songs Everyone Writes Now) Tour, which aims to plant the seeds of creativity, intercultural understanding, and empowerment across all 50 states. She will present free concerts and interactive, intermedia workshops, focusing on schools and communities that get little exposure to cultural and artistic diversity.

Shyu’s constant exploration is ultimately about discovering universal truths as expressed through music. Her research is never about a sampling of exotic sounds, but instead about gaining a deep understanding of cultures from the ground up, which reveals her deep faith in the powers of love and trust in humanity. Her musical philosophy can perhaps best be summed up by the last lines of “Door 9: Contemplation”, by Edward Cheng: “Life has no boundaries, when every place can be home.”