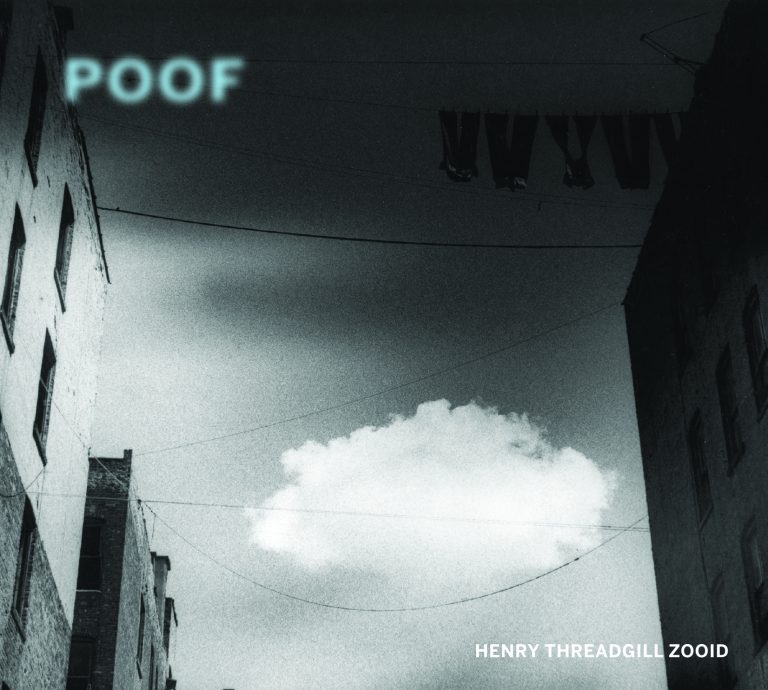 Poof is composer, saxophonist and flutist and newly-minted NEA Jazz Master Henry Threadgill’s latest work with his band, Zooid, his primary musical laboratory for the last two decades. Their last release together, In for a Penny, In for a Pound, was the winner of the 2016 Pulitzer Prize for Music, whose committee called it “a highly original work in which notated music and improvisation mesh in a sonic tapestry that seems the very expression of modern American life.” His 2018 releases – large group efforts Dirt… And More Dirt and Double Up, Plays Double Up Plus – were also critically-lauded, with Dirt voted the No. 2 release of the year in the NPR Jazz Critics Poll, who called it “densely packed elemental material; a respite from commercial and manufactured surroundings and a bed of organic possibilities.”

With Poof, Threadgill has returned to the symbiotic band, Zooid, the longest-running group of his half-century long career. Added together, its four members – Liberty Ellman on guitar, Christopher Hoffman on cello, Jose Davila on tuba, and Elliot Humberto Kavee on drums, along with the leader on alto sax and flutes – have been playing with him for a total of over 75 years. These are the musicians of his inner-circle, who have dedicated countless hours to mastering the maestro’s inimitable music – or at least to the extent that mastery can be achieved in music that is constantly changing and being pushed to the teetering edge. Like In for a Penny, In for a Pound, the composition on the album are described by Threadgill as sonatas or concerti: “Come and Go” for saxophone and cello; “Poof” for saxophone and guitar; “Beneath the Bottom” for trombone; “Happenstance” for flute and drums; and “Now and Then” for tuba and guitar. By this point, the group’s reliance on the serial intervallic system that was the basis of the group’s unique sound is more felt than prescribed or, as Threadgill describes it, “stripped down to the bones,” relying on the musicians to fill in the rest of the corpus. All the other hallmarks of this music are here: unpredictable forms, percolating rhythms, the interwoven melodic strains; there’s really nothing else remotely like it. The best part of it all is that Zooid is the one platform where one still gets to hear Threadgill really play. His keening saxophone wail retains that unmistakable gutbucket blues feel, with no small measure of church thrown in to the mix.

As Pi Recordings celebrates its 20th anniversary in 2021, we can’t help but reflect on this journey that started with our simultaneous release in 2001 of two albums from Threadgill: Everybodys Mouth’s A Book with Make a Move, and Up Popped the Two Lips with the then newly-formed Zooid. It has been a privilege to work with and get to know this amazing man, and it continues to astonish how hard he continues to push forward, even at the age of 77. During the pandemic, he photographed street scenes around his neighborhood in the East Village that show the exodus of people and businesses from New York City, which he plans to publish along with his writing in a book entitled “Migration and the Return of the Cheap Suit.” His next major project will be the multimedia experience “One” and “The Other One,” which will be performed over two nights in May, 2022 at Roulette Intermedium in Brooklyn, NY. It will feature 12 musicians performing his new composition “In Valence,” along with sampled heartbeats from four of them that Threadgill will maneuver in real-time, inspired by the work that Milford Graves – who passed away earlier this year – did in this field; his reading and improvising on text while electronically manipulating vocal samples; his films “Plain as Plain in Plain Sight” and “Plain as Plain but Different;” and custom-made masks. It all sounds somewhat preposterous, but we know from our long experience with him that many of his projects sound far-fetched when he first describes them, but they eventually turn out to be glorious works that are nothing like what anyone might imagine them to be. It’s also a clear extension to the AACM impulse to break boundaries and be artists in a holistic way, not just in music, a characteristic shared by so many of that organization’s titans.

There are also upcoming performances with Zooid and two string quartets with percussionist Ross Karre of International Contemporary Ensemble (ICE) at Orchestra Hall in Detroit; Zooid celebrating the artist David Hammons’s major exhibition at the Pinault Collection / Bourse de Commerce in Paris; and “Passages,” his ongoing collaboration with the visual artist Danae Mattes and dance choreographer Hope Mohr. His long-awaited autobiography, “Easily Slip Into Another World,” with Brent Hayes Edwards, will be published by Pantheon Books in the summer of 2022. Here’s looking forward to another two decades.