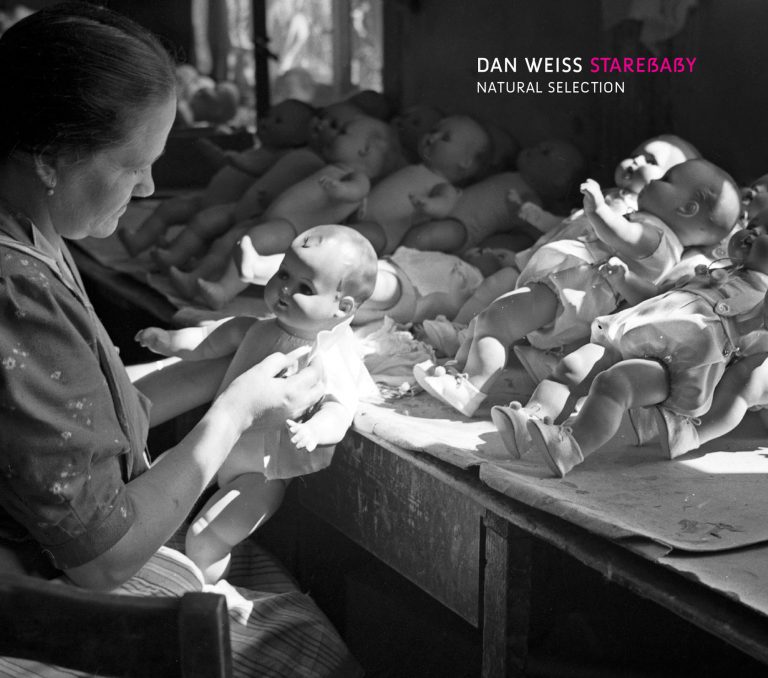 Natural Selection is the highly-anticipated follow-up to drummer/ composer Dan Weiss’s 2018 release Starebaby, an unconventional compounding of doom metal, electronic music, and improvisation into a dark and mystic brew. The album was named to many best-of 2018 lists, including Rolling Stone, which described it as “an album that creates its own sonic cinematic reality,” while NPR called it “Astonishing… A true convergence of heavy trudge and spontaneous combustion.”

The recording of Natural Selection came fast at the end of a run of performances for the band – also named Starebaby – which helped further cement the group’s unique sound. According to Weiss, “Logging so many hours playing together helped us to really internalize this music, which allows us to improvise with more freedom and fewer inhibitions.” Along with Weiss, the band – who all return from the first album – is made up of a dream-team of musicians who share a love for heavy metal and whose playing is unbound by genre: Ben Monderon guitar, Trevor Dunn on bass, and the twin-keyboard/piano/electronics attack of Matt Mitchell and Craig Taborn. It’s staggering to contemplate the wide-ranging ability of these musicians: from bone-crunching power to pensive reflection; exacting hits to improvised texture; faith to the compositions and manic improvisation. Each of these musicians is a leader in his own right; their 2019 releases evidence the sheer scope of their individual talents: Dunn, who was a member of Mr. Bungle (with Faith No More singer Mike Patton), Fantômas (also with Patton), Melvins, and Secret Chiefs 3, released his album Nocturnes, which features his compositions for string quartet, piano and bass. Monder, who plays on David Bowie’s Blackstar, put out the dreamy Day After Day, for solo guitar and trio. Taborn collaborated with pianist Vijay Iyer on The Transitory Poems, an album of piano duos. Mitchell’s Phalanx Ambassadors (Pi) features his usual synapse-exploding, intricately detailed work, this time for guitar, vibraphone, bass and drums. Weiss, himself, released the more jazz-oriented Utica Box, featuring his long-running trio with pianist Jaco Sacks, bassist Thomas Morgan, with the addition of bassist Eivind Opsvik. The success of Natural Selection would not be possible without these particular musicians, with their wide-ranging, all-embracing love of music and ability to execute everything that Weiss throws at them with conviction. It’s all captured exceptionally by veteran recording engineer Ron Saint Germain (Soundgarden, Living Colour, Bad Brains, Sonic Youth) and mastered by Joe Gastwirt.

Natural Selection, as with Starebaby, is deeply inspired by the 2017 return of David Lynch’s television show Twin Peaks, whose dreamlike, foreboding feel pervades much of this music. In composing the new works, Weiss visualized tulpas — which he describes as “beings that are created through spiritual or mental powers that take on similar forms as the original” – for some of the compositions on the first album. These include “Episode 18,” which is a tulpa of “Episode 8” in that both pieces alternate between brutally heavy and atmospheric musical passages. Similarly, “Bridge of Trust,” “A Taste of a Memory,” and “Acinna” share the same musical DNA as “Head Wreck,” “The Memory of my Memory,” and “Annica,” respectively, from the earlier release. While much has been made of its heavy metal influences, in truth, the music is far from a wall-to-wall bludgeoning: dense, intense, and fast sections segue to spare, placid and gentle. Indeed, wide ranging dynamics, tempo, and emotion is a hallmark of much of Weiss’s work.

Weiss, who usually composes from either the piano or drums, even went so far as to learn how to play the electric bass after deciding that it was important to approach the music, particularly the more rock-oriented tracks, from the vantage point of that instrument. He began a course of study with the likes of Dunn, Chris Lightcap, Chris Morrisey, Jon Flaugher, Linda May Han Oh, Matt Brewer, and Chris Tordini, all masters of the instrument, with additional help from guitarist Miles Okazaki. According to Weiss, “I learned soul, funk, metal, rock, and jazz bass lines in order to acquaint myself to the way the instrument felt. Then I just used my creativity and ear to guide my compositional process. A lot of the sections from both records came from the bass. I got really into it and still practice from time to time.” Overall, Weiss describes the new compositions as “less intentional,” leaving more room for solos and group interplay. There is also more sensitive writing, with more use of the piano, taking full advantage of the melodic inventiveness of Taborn and Mitchell. Like all of his Pi releases, including Fourteen (2014) and Sixteen (2016), these are decidedly individual works; nothing else out there that sounds remotely like it.

Until COVID-19 brought the musical world to a standstill, Starebaby was set to hit the road on a series of US and European tours. Other plans, including a duo with Okazaki, and playing and recording with the likes of Miguel Zenon, Dave Douglas, Jen Shyu, and Noah Preminger, were all put on hold. Weiss, though, claims that the down-time has been the most productive of his life: He has focused his attention on composing new works, producing two videos a week for his Patreon page on everything from drum techniques to musical analysis, learning music recording and production software Logic Pro, taking lessons on music mixing, completing a drum instruction book, and collaborated on collaborative, remote recordings with Zenon and Okazaki. Whenever we come out of this challenging period, what is certain is that Weiss will emerge with more sui generis, genre-be-damned projects that exist nowhere else but out of his feverish imagination.