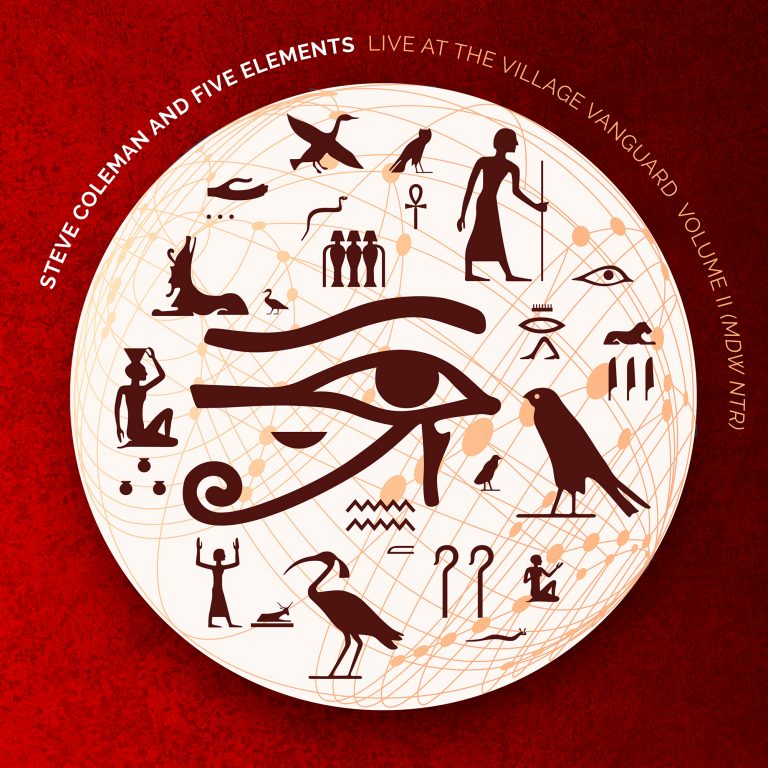 Live at the Village Vanguard, Volume II (Mdw Ntr) finds alto saxophonist and MacArthur fellow Steve Coleman returning to that celebrated New York venue with his flagship band Five Elements in two sets that fully capture the group’s incendiary live experience. Volume I of this series (Pi 2018) was described by Rolling Stone as “Downright exhilarating… Feels akin to watching the Harlem Globetrotters work their head-spinning magic on the court.” If anything, Volume II – recorded a year later in May 2018 – amps up the energy level even higher. Replacing guitarist Miles Okazaki in the band is the masterful freestyle rapper Kokayi, who brings a freewheeling, rhythmically-acute, almost tent revival aesthetic to the proceedings. Pushed by Coleman to perform as spontaneously as possible, the result is frenetic improvisation that is constantly teetering on edge, yet somehow still retaining form and structure, an effect that is only possible because of the near-telepathic level of communication that the ensemble – Coleman, trumpeter Jonathan Finlayson, bassist Anthony Tidd, and drummer Sean Rickman – has honed through hundreds of sets played together over the decades.

Coming immediately after back-to-back weeks-long residencies in Detroit and Chicago followed by a European tour, the Five Elements’ week at the Vanguard finds the group’s cohesion at an all-time high. Featuring Coleman’s characteristically complex interlocking rhythms and turn-on-a-dime changes, the music can only be performed at this level when the performers are completely attuned to each other. For Finlayson, playing at the Vanguard is always a special experience. Playing twelve sets over six nights, “you’ve got all that time and space to make it happen. It starts to feel like a long story rather than just individual sets. Our approach was different every night, which suits us perfectly because we never perform a piece the same way twice, anyway.” He also called that week “as in-sync as the band has ever been.” Kokayi – who first played with Coleman in 1994 – slots into the group seamlessly. Usually, when hip hop is used in a jazz context, the band sets up a comfortable groove for the rapper to float over. That’s far from the case here: Kokayi is fully integrated into the ensemble, improvising as a true third horn while picking up all the hidden cues that foreshadow an upcoming change of direction, and reveling in the rhythmically-complex group interplay. He is also almost certainly the first rapper to appear on stage in the history of the Village Vanguard. Lorraine Gordon – the venue’s long-time proprietor – was well-known for having strong opinions about the music that is played there, so there was some trepidation as to how she might react to the performance. As those familiar with the layout of the room know, musicians coming off the stage after a set must file past Gordon’s table to get back to the green room, and it’s hard not to sneak a peek at her to gauge her reaction to the performance. After the band’s first set of the week, following a raucous ovation from the audience, Gordon, with a big smile on her face, unexpectedly stood up and gave Kokayi a big hug and told him “You’re wonderful.” Unfortunately, that was also probably the final set that she would catch at the club: She passed away a few weeks later at the age of 95, bringing to close a 30+ year legacy of presenting great music to the world.

The sets feature a combination of staples of Five Elements’ live sets (“Little Girl I’ll Miss You,” “Pad Thai,” and “9 to 5”) and new works that reflect Coleman’s recent composition practice whereby the melodies and forms are derived spontaneously while he visualizes various motions and shapes, which are then orchestrated for the group. As on Volume I, most of the new compositions are inspired by the shapes and symbolism of the Mdw Ntr, a transliteration of the Kemetic writing system, often referred to as hieroglyphics. The band’s virtuosity is astounding: Tidd’s rock-solid foundation and Rickman’s constantly-varying attack hurtles the music forward with an irresistible groove. Coleman and Finlayson weave a serpentine path, sometimes in complex unison but more often in counterpoint to each other. Their ongoing dialogue is uncanny: They are like the modern-day Bird and Miles, which is apt since this is, at its core, a music that is as much as anything else deeply rooted in Parker’s musical language, albeit of the most futuristic variety. The whole enterprise has the feel of a tornado, with a mysterious kinetic energy that keeps it aswirl.