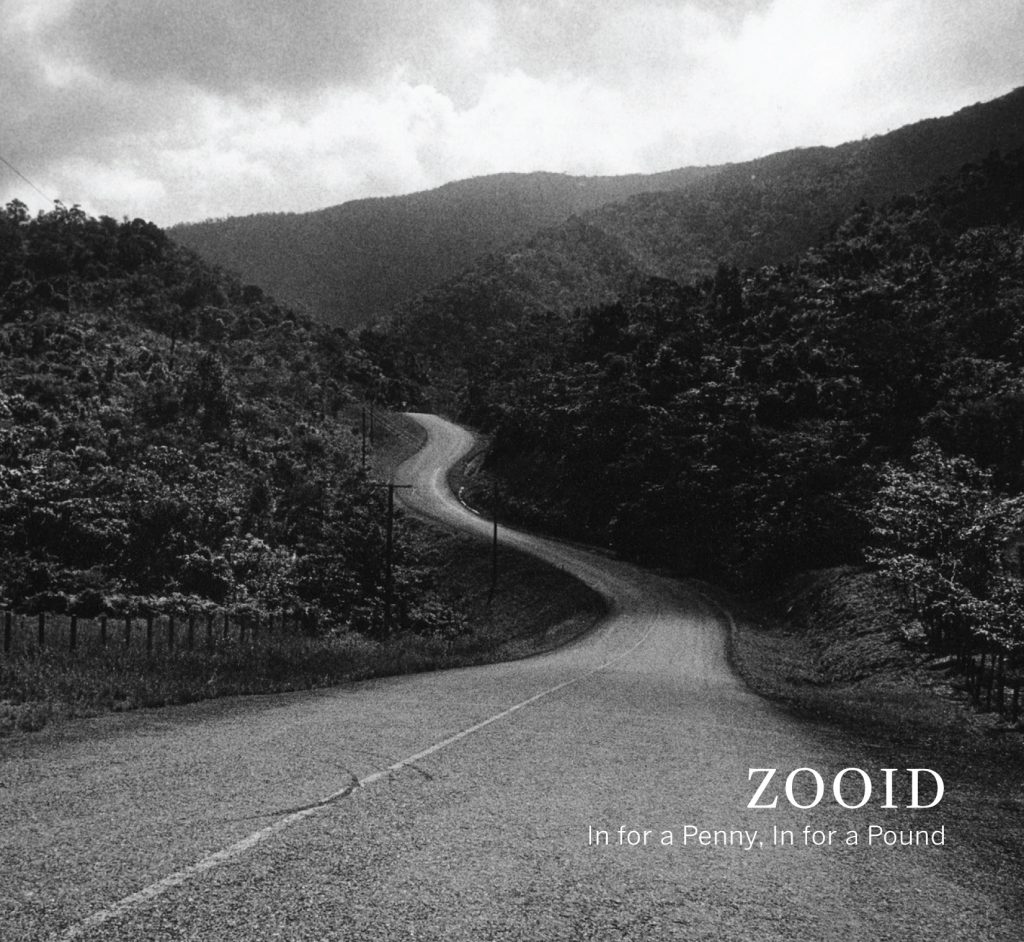 In for a Penny, In for a Pound is the latest installment in saxophonist/flutist/composer Henry Threadgill’s ongoing exploration of his singular system for integrating composition with group improvisation. The music for his band Zooid — Threadgill’s main music-making vehicle for the past fourteen years and the longest running band of his illustrious forty plus-year career — is no less than his attempt to completely deconstruct standard jazz form, steering the improvisatory language towards an entirely new system based on preconceived series of intervals. His compositions create a polyphonic platform that encourages each musician to improvise with an ear for counterpoint and, in the process, creating striking new harmonies.

Threadgill is widely considered to be among the most important artists in jazz. The New York Times called him “one of the most thrillingly elusive composers in and around the jazz idiom: a sly maestro of unconventional timbres, bristling counterpoint and tough but slippery rhythms,” and NPR called him “a true idiosyncratic great.” He is a founding member of the Association for the Advancement of Creative Musicians (AACM), which is celebrating the 50th anniversary of its founding this year, and he continues to adhere to one of that august organization’s basic tenets: that of finding one’s individual path through original music. He continues to create music that is pushing the boundaries for what is possible.

The new work, which Threadgill calls an “epic,” includes four main movements written specifically to feature each of the musicians in Zooid: “Ceroepic” for Elliott Kavee on drums and percussion, “Dosepic” for Christopher Hoffman on cello, “Tresepic” for Jose Davila on trombone and tuba, and “Unoepic” for Liberty Ellman on guitar. They are introduced by an opening shorter piece and sandwich an exordium (“In for a Penny, In for a Pound” and “Off The Prompt Box,” respectively.) Threadgill’s own alto saxophone, flute and bass flute is woven throughout each section. In for a Penny, In for a Pound utilizes, as with all of his music for Zooid, a strategy of Threadgill’s own device: a set of three note intervals assigned to each player that serves as the starting point for improvisation. While this may seem simple on the surface, the juxtaposition of the notes played on each instruments alternately meld and clash, creating surprising chords and harmonies on-the-spot. Not held together by any chordal preconceptions, the result is true, improvised four-part polyphony. Of this music, Liberty Ellman, who will release Radiate, his first new album as a leader since 2006’s Ophiuchus Butterfly later this year, says: “Henry is extending the forms and writing more varied thematic material. There is even more dynamic and timbral contrast with ensemble vignettes turning to sparse monologues or group improvisation on the turn of a dime.” Zooid is certainly the only group able to perform these compositions since they involve a wholly different way of engaging in group improvisation. Thoroughly attuned with each other, the band continues to provide Threadgill with the foundation to expand on his ever evolving musical inspirations.

In all the discussion about the complex terrain of his compositions, it is sometimes easy to lose sight of Threadgill’s power as a player. In his review of Zooid’s performance at the Village Vanguard in 2014 — the first time Threadgill had played at that iconic venue as a leader in almost 25 years — critic Ben Ratliff of the New York Times, who chose it as one of his top ten top concerts of the year, wrote: “The intensifying strokes were his alto saxophone solos. They were built of epigrammatic phrases, aligned with the moving intervals but pivoting off from them. They were out in front, gestural, actorly, elegant, noisy and tragic. Dealt in short segments, their essence could be absorbed piece by piece, as if he were feeding you with crumbs. They’d often end without traditional resolution, but with a sense of something serious hanging in the air.” A great Threadgill solo sets you on edge: you know that it’s going to be a jab, an uppercut or a body blow, but you never know how or when it’s going to hit you. It’s the same way with his compositions on In for a Penny, In for a Pound: it comes at you from every angle, at different speeds, in infinite combinations. That’s the beauty of Threadgill’s music for Zooid: that sense of constant surprise.