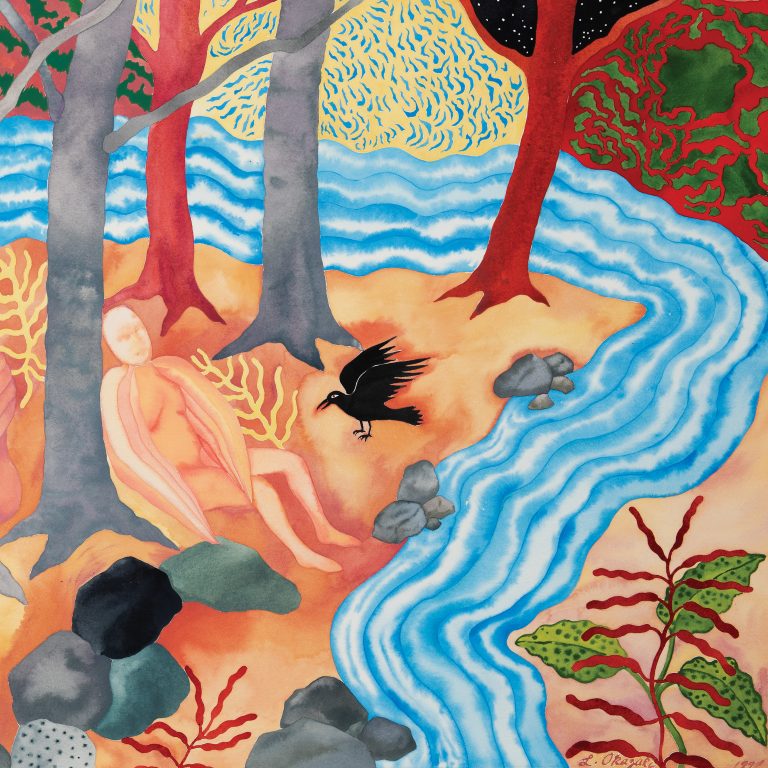 Thisness is guitarist Miles Okazaki‘s third album for Pi Recordings with his band Trickster featuring keyboardist Matt Mitchell, bassist Anthony Tidd, and drummer Sean Rickman. It is a sequel to The Sky Below, which was described by Allmusic as “an umbrella of labyrinthine lyricism, full of mischief and delight as a harmonic foundation,” and by Point of Departure as “overflowing with energy, and elegant despite its complexity.” Unlike the first two releases from this band, which emphasized fantastical, narrative storytelling, Thisnessis more about providing a platform for these masterful musicians to improvise in the construct of compositions that emphasize non-linear flow between musical ideas. Okazaki describes it as “a sound that discards notions of logic and control and strives toward something more like collective dreaming.”

2020 was to be a banner year for Okazaki. Riding a crest of recognition from the critical success of his recent releases – including WORK, an ambitious recording of the complete compositions of Thelonious Monk for solo guitar – that helped land him atop the Rising Star Jazz Guitarist list in the Downbeat Critics Poll, Okazaki was about to embark on an extensive US and European tour, until the Covid pandemic shut everything down. Okazaki’s initial reaction was to figure out a way to use the hard work that the musicians had put into music and try to capture the energy of the tour while society was in lockdown. The result was Trickster’s Dream, an imagined concert released on Bandcamp as part of Pi Recordings’ “This is Now: Love in the Time of Covid” series, which sought to help make up for some of the wages lost by musicians due to the pandemic. Okazaki sang a scratch track for an imagined Trickster set and sent and it to the other musicians to individually layer over from the isolation of their homes. The result is a blast, from musicians chomping to release their pent-up energy. The accompanying video of the remote recording of the four musicians – described by JazzTimes as “a trickster’s tell on the making of the magic” – is particularly astonishing.

Thisness captures the next chapter in the evolution of the Trickster sound. The original Trickster (Pi 2017) had the aesthetics of an acoustic jazz recording, while The Sky Below (Pi 2019) was more about the exploration of a multiplicity of sounds, with layers of effects that help evince a fantastical world. For Thisness, rather than a fixed book of compositions, the music is comprised of various themes that the group weaves in and out of, connected by hubs that Okazaki describes as “traffic circles, or bus stations.” Through hidden musical cues, the leader signals when the music is approaching the transition point and which path to take to exit. As Okazaki described it: “I had detailed blueprints, but at some point, surrendered to the dream logic of the collective. The intention was to make something like an exquisite corpse, the collective improvisations developed by the Surrealists. For this album my job as composer was to bring in some ideas, set them in motion and then listen, trying to recognize the value of serendipitous events at transitional points in the music and lead the band down whatever path may be opening.” The wonder lies in the journey, with beautiful new vistas opening with each turn in the road.

The album opens with a phrase that begins all three Trickster albums, signifying the onset of the trip. The music unfolds seamlessly, revealing the movement from one episode to the next only after the transition has occurred, which is only possible with musicians who are completely attuned and possess the ability to execute these changes at the drop of a hat. Bassist Tidd and drummer Rickman, whose synergy confirm almost a quarter century of playing together, provide an elastic foundation, hurtling and tugging on the ever-present groove. Mitchell and Okazaki together are a marvel of cohesion: Their constant weaving of contrapuntal, labyrinthine lines astound with their nimble precision. The layers of overlapping melodic lines and rhythms are made more synapse-jumbling by the textural chatter from a “robot” programmed to improvise along with the recorded tracks, further pushing the music towards an alien, super-human realm. Despite all the obvious complexity, the playing feels effortlessly in service of the music rather than pointlessly dazzling. Okazaki favors clean single notes in his playing, treating the guitar as primarily a percussion instrument. While he uses a variety of guitars on the recording, his primary axe is a recently-acquired Gibson ES-150 “Charlie Christian” circa 1940 with its accompanying EH-150 amp. The sound of that instrument bathes the recording in a warm glow.

When composing this music, Okazaki envisioned a surreal world as imagined by Linda Okazaki, his mother, in her painting “Dream at Salt Creek,” which is reproduced on the album cover. The titles to the four tracks further evince that fantastical feeling: They are taken from lines from the poem “The Far Off Place” by Sun Ra, which is found in the liner notes of his album Monorails and Satellites. It’s also influenced by the writing on Surrealism by the historian and author Robin D. G. Kelley, who summed up Thisness in the album’s liner notes: “convulsive beauty, propulsive rhythm, elusive meaning…a spontaneous and unpredictable work of art, accordingly discordant, subversively accordant, a pendulum crushing the cage of temporality. This is Surrealism in practice. This is jazz. This is freedom.”