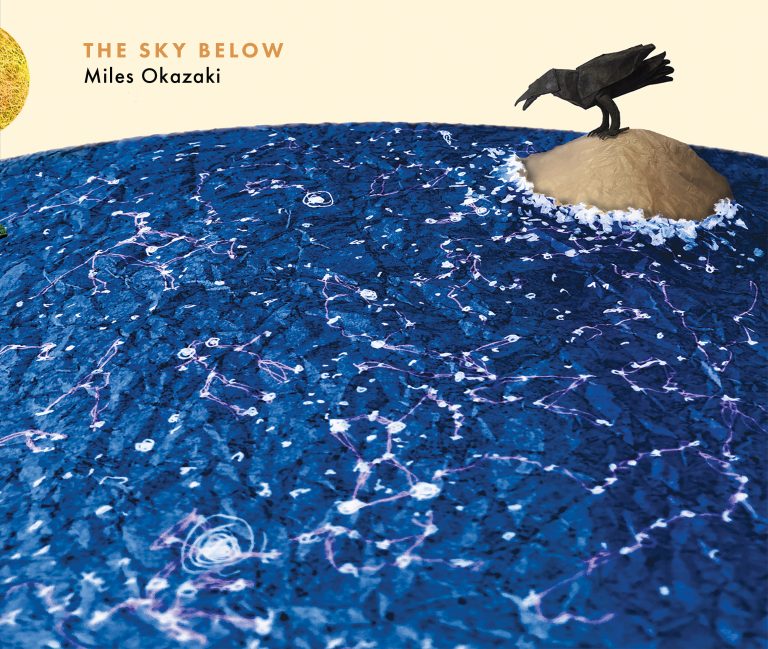 The Sky Below is guitarist Miles Okazaki‘s fifth album of original compositions, and his second album for Pi Recordings. It is a sequel to Trickster, which was widely extolled and landed on many year-end lists of 2017 including Popmatters (“a mature work for the ages”) and the Los Angeles Times (“immersive, groove-heavy and ultimately immediate”). The album was described by the New York Times as “tenacious futurism,” by The Wall Street Journal as “a true concept album,” and by Pitchfork as “obviously complex, the work of virtuosi. But the resulting beauty is easy to appreciate.” The album received critics’ picks in both Downbeat and JazzTimes, who called it “an intellectually hefty album that feels weightless” and “a real breakthrough.”

Trickster marked the beginning of a new approach to composition for Okazaki, one that is focused on mythology and storytelling and concerned primarily with narrative flow. He describes this inspiration in the liner notes for Trickster: “The trickster figure is an ancient archetype in human folklore. They are creative in nature, using mischief and magic to disrupt the state of things, breaking taboos and conventions, opening doorways. They exist outside of the mainstream, working from the margins, creating movement across the borders. They cause damage and they heal. They are storytellers and improvisers.”

The Sky Below adds a new chapter to the Trickster story, this time based on the classic form of an oceanic voyage. The music follows the Trickster character as it crosses a boundary (“Rise and Shine”), enters the unknown (“Dog Star”), visits magical islands (“Anthemoessa” and “Seven Sisters”), is caught in a storm (“Monstropolous”), abandoned (“The Castaway”), and finds a way home (“The Lighthouse”). The album closes with a microtonal lullaby (“To Dream Again”). Okazaki writes in the liner notes: “If Trickster was the introduction to the characters, the songs on this album are their children, bearing their features but finding their own way. The flight of the Trickster moves across the threshold into the magic world, traverses sea and sky, visits ancient islands, is tested in the tempest, is abandoned, and returns with stories to tell. The titles and themes of the compositions are borrowed from writings about the Sea, the endless source of symbolism involving mystery, creation, and terrible power.” (Detailed explanations of the titles can be found at milesokazaki.com/the-sky-below-2019)

For these songs, Okazaki took each of the compositions from Trickster, reduced them to their basic components, and rewrote new compositions from this genetic material to carry on the story to a new generation with symbolic and sonic continuity. As with much of Okazaki’s music, the movement is created with a variety of rhythmic structures and illusions with the focus always on groove and rhythmic feel as a storytelling vehicle.

The material for The Sky Below was developed while touring with a new version of the Trickster band, a quartet of Okazaki on guitar, Matt Mitchell (taking over for Craig Taborn, who appeared on the first album) on piano, Anthony Tidd on electric bass, and Sean Rickman on drums. Okazaki got a sense of Mitchell’s skill set after working for several years on the material for the latter’s Phalanx Ambassadors (Pi 2019) album. He describes Mitchell’s role in the band: “Matt can do certain things on the fly, like generative improvising from cells and transformations, which is important for these tunes. He can play in a way that totally avoids “licks” – it’s a very pure sound that gives you a lot of options as a composer. Like the song “The Lighthouse,” which is a just a version of a standard, but his approach is oblique enough that it avoids showing all the cards.” The team of Anthony Tidd and Sean Rickman form a seamless rhythmic foundation for the band. Okazaki began playing with them in saxophonist Steve Coleman’s Five Elements. Together, they demonstrate the balancing act of negotiating abstract musical information while maintaining an unstoppable rhythmic drive.

The album is also informed by an intense period of compositional study that Okazaki undertook in creating WORK, a six-album solo guitar recording of the complete compositions of Thelonious Monk that he released in August 2018. It was the first time the entire songbook had been recorded on a solo instrument, and the project received much critical praise, landing on more than a dozen best-of-2018 lists, including the New York Times, which called it “a monumental statement of devotion.” WBGO described it as “an act of immersive scholarship and exhaustive scope… a singular achievement,” and NPR’s Fresh Air called it “heroic” and “epic.” The Sky Below is a direct result of Okazaki’s extreme exploration of Monk’s vision: In trying to create the symbolic system of the Trickster recordings, Okazaki went back to the well of the great composer for inspiration for how to create an idiosyncratic sonic world of his own.

The Sky Below marks the first time that Okazaki has used guitar effects on his own albums since his debut release, MIRROR, in 2006. He is known primarily for possessing a clean acoustic sound played on the Gibson ES-175 Charlie Christian that he has used for the last 25 years. But here, he utilizes five different guitars to continually shift the sonic impression. Recent work with producer/guitarist David Torn on Mitchell’s Phalanx Ambassadors and tours with guitarist Mary Halvorson’s quartet playing the music of John Zorn informed the types of effects used, and the quarter tone guitar used on “To Dream Again” was built for work with Amir ElSaffar’s “Rivers of Sound” project. In order further expand the sound, Okazaki also invented several virtual instruments in Pure Data, a visual computer programming language. Rather than using commercial software, Okazaki painstakingly designed the programs using the same musical concepts as the compositions themselves. He improvised on these instruments to create raw musical material that was then fed through the Prophet-6 with Matt Mitchell manipulating the sounds in real time. This is heard most explicitly on track that begins the second half of the album, “Monstropolous.” With its carefully-crafted narrative structure and expansive use of studio techniques, The Sky Below evokes the fathomless depths of the sea, both familiar and strange.