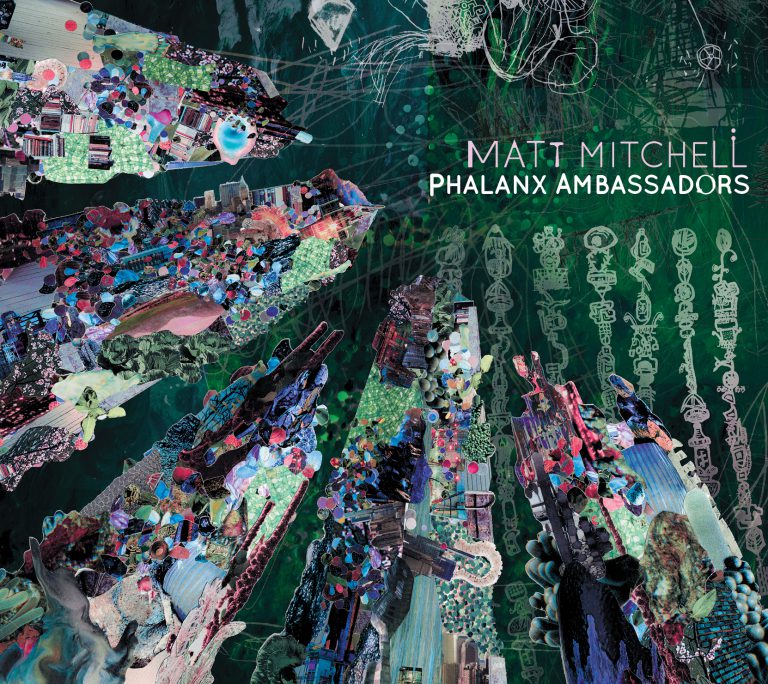 Phalanx Ambassadors is the latest release from pianist/keyboardist/composer Matt Mitchell, whom Will Layman in PopMatters calls “the most complete and well-integrated improvising pianist of the last 15 years.” He also called his prior release, A Pouting Grimace (Pi 2017), “brilliant and varied… animated by breathtaking compositional imagination and startling arrangements.”Phalanx Ambassadors similarly features works that burst forth with intricate detail, featuring precise execution of multi-layered rhythmic material, adventurous harmonic exploration and otherworldly melodies. While rigorously structured, the music also leaves ample room for intertwining improvisation.

If Pi Recordings has a “house pianist,” Mitchell would be it. Not only is this his fourth release as a leader for the label, he’s also appeared on seven other critically-acclaimed Pi releases from Steve Coleman, Dan Weiss, Jonathan Finlayson and Anna Webber, not to mention his work with the likes of Tim Berne, Dave Douglas, John Hollenbeck, John Zorn, and Linda May Han Oh, among many others. The reasons are obvious: Mitchell is almost uniquely capable of tackling such a huge range of musical material. Indeed, it seems as if he thrives on fresh challenges, both from other musicians, but especially of his own device.

Phalanx Ambassadors is no exception. As guitarist Miles Okazaki said: “With Matt’s music there is just an incredible shitload of information. It seemed to be an endlessly branching decision tree, where any momentary lapse of concentration would just leave you lost in the wilderness. Anyone who’s seen Matt play can relate how he seems to have trained himself to reach and maintain extreme levels of focus, navigating multiple streams of information that would clog the synapses of two or three competent players.” Mitchell called this “pretty definitively the most challenging music I’ve ever written for a band, ever,” which given his prior output, is saying a lot. Nevertheless, the music retains its melodicism, with episodes of shimmering finery and swinging, albeit sometimes off-kilter, grooves. Pianist Cory Smythe, a long-time admirer who is best known as the pianist for the International Contemporary Ensemble (ICE) and collaborations with drummer Tyshawn Sorey said of the music: “How is he managing to make so much dissonance — harmonic and rhythmic — gleam? His pieces all seem to set out to accomplish something by way of an almost cartoonish (in the best, most fanciful, clangorous way) profusion of parts, gears, levers. It comes at you like paragraphs of musical information all leading, ultimately, to a kind of epiphanic conclusion.”

The eponymously-named band – with Mitchell on piano and keyboards, Okazaki on guitars, Patricia Brennan on vibraphone and marimba, Kim Cass on bass, and Kate Gentile on drums — rehearsed for eight months in advance of their first performance in 2016, evidence not just of the music’s difficulty, but of the shared commitment to this music from each of the band’s members. Along with producer David Torn, the musicians descend into the maelstrom that is Mitchell’s idiosyncratic sound world, creating music that eludes all genre boundaries and conventions.

In 2011, a conversation with my brother Andrew centered around the term “stretch goal” as a term from the business world. Despite the apparent utility of the word in that world, we found it to be hilarious and naturally I titled the piece I was working on at the time thusly. And, as so often happens with such small moves, I decided it was useful and it became part of the ethos of a group of pieces. The nature of the piece, now the first piece on this album, is indeed such that the melody involves stretches of various sorts in the extreme in order to play correctly on any instrument, and in turn the learning of the piece itself at the proper tempo until recently indeed comprised a stretch goal: an extremely difficult task with a long arc towards completion often requiring on some level a thorough assessment of one’s own abilities.

Pushing one’s own technical limits on an instrument can be part of a musical stretch goal, as it indeed has been for hundreds of years. Pianists contend with Beethoven’s Hammerklavier and Xenakis’s Evryali; improvisers have Tatum, Coltrane, and Holdsworth as forebears. The pieces on this record indeed require virtuosos to execute, and verily this band has them in the presences of Miles Okazaki, Patricia Brennan, Kim Cass, and Kate Gentile. Individual parts aside, these pieces are band stretch goals. The melodic/contrapuntal, textural, and rhythmic tasks that the ensemble must tackle as a unit are a huge part of why the premiere in 2016 came two years after the completion of the seventh and final piece of the set, and why I chose to wait until December 2018 to record the music – in other words, after I composed and recorded A Pouting Grimace. This takes time and extreme dedication on everyone’s part, both individually and collectively, to a degree that is extremely rare to find.

The stretch goal aspect of learning these pieces is actually secondary to the goal of writing unencumbered by real world expectation and limitation. Feeling free to construct music out of time and space and then worrying later about the “how.” There is indeed joy in the construction, the nuts and bolts of how all seven pieces are related in macro and micro ways: the interrelated rhythmic approaches within a common length of 396 beats for each piece, the anagramming and encoding of pitch material, the relationships between events, and counterpoint. But this is all means to an end, as it always is for me, with the goal being to access and occupy heretofore un-accessed spaces, both within the composed corners of the pieces and the terrain yet to be mapped and remapped via improvisation, ideally redefining and reframing familiar spaces and creating new ones each with each listen and performance.

Incorporating improvising in the pieces was another set of problems to solve, usually dictated by the pieces themselves. You have the “opening credits” — thank you Miles, for the observation — of stretch goal, exploding out of the gate with a drum solo and moving backwards through the customary order of appearances; the collective five-way digressions and glosses interrupting the extended band counterpoint on phasic haze ramps; the marimba, Mellotron, and fuzz guitar doppelgängers to the vibes, piano, and guitar solos on mind aortal cicatrix. Other flavors include the dual percussion tracks, semi-freestyle guitar harmonics and vibes coloration on ssgg, and the opening drum set improvisation and closing additive layered Prophet-6 solos on be irreparable. The music of Phalanx Ambassadors represents an apex for me in all these respects. One musical project necessarily informs the next one, and with this music I strove to remove all constraints to the extent it made sense to me, and also in many ways it didn’t make sense, until it did. And that is one recurrent goal for me in creating music such as this: to try and make something that will continually and variably make sense, even as it sometimes doesn’t until it does. I think that has happened with Phalanx Ambassadors.  – Matt Mitchell, April 2019