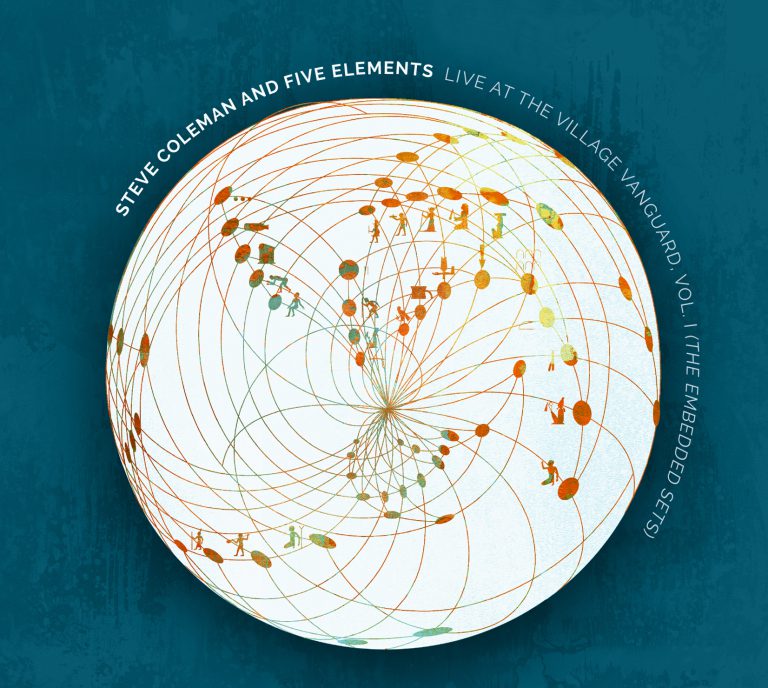 Alto saxophonist Steve Coleman’s Live at the Village Vanguard, Vol. I (The Embedded Sets) is his first live release in over 15 years. It captures his band Five Elements in two joyous sets at the historic New York venue where some of the most important jazz recording have been made, including ones from John Coltrane and Sonny Rollins that were huge influences on Coleman. Coleman’s personal history is tied deeply with the club: One of the main reasons he moved to New York City from Chicago at the age of 21 was for the opportunity to play in the Thad Jones/Mel Lewis Orchestra (renamed the Mel Lewis Jazz Orchestra after Jones left at the end of 1978), of which he was a member from 1978 to 1980. Then, as now (under the name The Vanguard Orchestra), the band played at the club every Monday night and was Coleman’s first prominent professional gig in New York. After playing there with singer Abbey Lincoln in 1984, there followed a hiatus of over 30 years before he was invited to perform at the club as a leader in 2015, and he has led his band Five Elements there every year since.

Unlike his two most recent releases, Morphogenesis (NPR Critics Poll #2 album of 2017) and Synovial Joints (New York Times #1 jazz album of 2015), both of which are highly orchestrated, Coleman’s recent goal has been to perform as spontaneously as possible and yet still retain form and structure. The melody of “Embedded #1,” for example, was composed in one extemporaneous moment, without any editing, and some pieces were composed live on stage at the Vanguard earlier in the week. Even the long-time staples of Coleman’s live repertoire (Bunky Green’s “Little Girl I Love You” and Doug Hammond’s “Figit Time”) were performed without preconceived notions towards form. His ensemble has been able to achieve this instinctive ability as a result of a series of weeks-long residencies – they have done eleven to date in cities such as Chicago, Los Angeles, Detroit, Philadelphia and New York – that Coleman has organized and largely paid for over the last four years through his non-profit organization M-Base Concepts, Inc. During these residencies, the musicians do community outreach to underserved communities by day — including inner-city schools and community centers — and perform concerts by night. This has the added benefit of allowing the band to play together non-stop for weeks on end, helping to hone their telepathic intuition to a knife’s edge. Coleman believes strongly that only constant and consistent performance as a unit will enable the music to fully blossom.

And so it was on these two nights at the Village Vanguard that everything came together: After some halting figures by Coleman, he’s slowly joined by the other members of Five Elements and soon enough the band is absolutely on fire. That piece, “Horda,” which first appeared on his Morphogenesis album, leads to a series of new compositions that are interspersed with old Coleman favorites. Of the newer compositions – “Embedded #1,” “Djw,” “idHw,” “twf,” “Nfr,” ”rmT” – many utilize a concept that Coleman is developing of using chains of tonal dyads that are strung together to create certain embedded melodic structures, which he described as “pairs of notes strung together in a chain.” He’s also currently researching the connection between language and music, in particular the early attempts at music notation using shapes and glyphs in Kemet (ancient Egypt) and the structural and functional similarities between spontaneous composition and Mdw Ntr, a transliteration of the ancient Egyptian writing system, usually called hieroglyphics. This explains some of the seemingly odd song titles, which are in Mdw Ntr: Djw = the masculine form of five, idHw = marsh, twf = papyrus, Nfr = beautiful, rmT = man.

Performing at the Village Vanguard is, of course, always especially momentous. Bassist Anthony Tidd avers “It’s a great honor that reinforces the fact that, though we may sound a world apart, we are still creating within the very same aural tradition, from the very same long roots stretching back to Armstrong and others before. We continue to stand upon the shoulders of those who came before.” Guitarist Miles Okazaki recalls “I remember that Steve brought in a whole lot of new stuff just that week. It wasn’t easy to stay relaxed while tackling new material at the Vanguard. But that’s a certain sound that is at the heart of improvised music, not complacent, not yet settled into any pattern, struggling, searching. Steve’s music is more than just another gig – you can’t walk off the street and make it through a set. Although there is material involved, that’s not really the thing. It’s an approach to creation, an aesthetic, a skill set, a vibe, and many other things that took (at least for me) many years, thousands of hours, to internalize.” The musicians who appeared on stage, which also include Jonathan Finlayson on trumpet and Sean Rickman on drums, collectively have over 80 years of experience with Coleman’s music and they tackle Coleman’s typically intricate music with an effortless grace. The band’s mastery over the cross-hatching rhythms, tricky counterpoint and percolating grooves, all inspired by the magical vibe of the Village Vanguard, is captured here at its absolute peak.