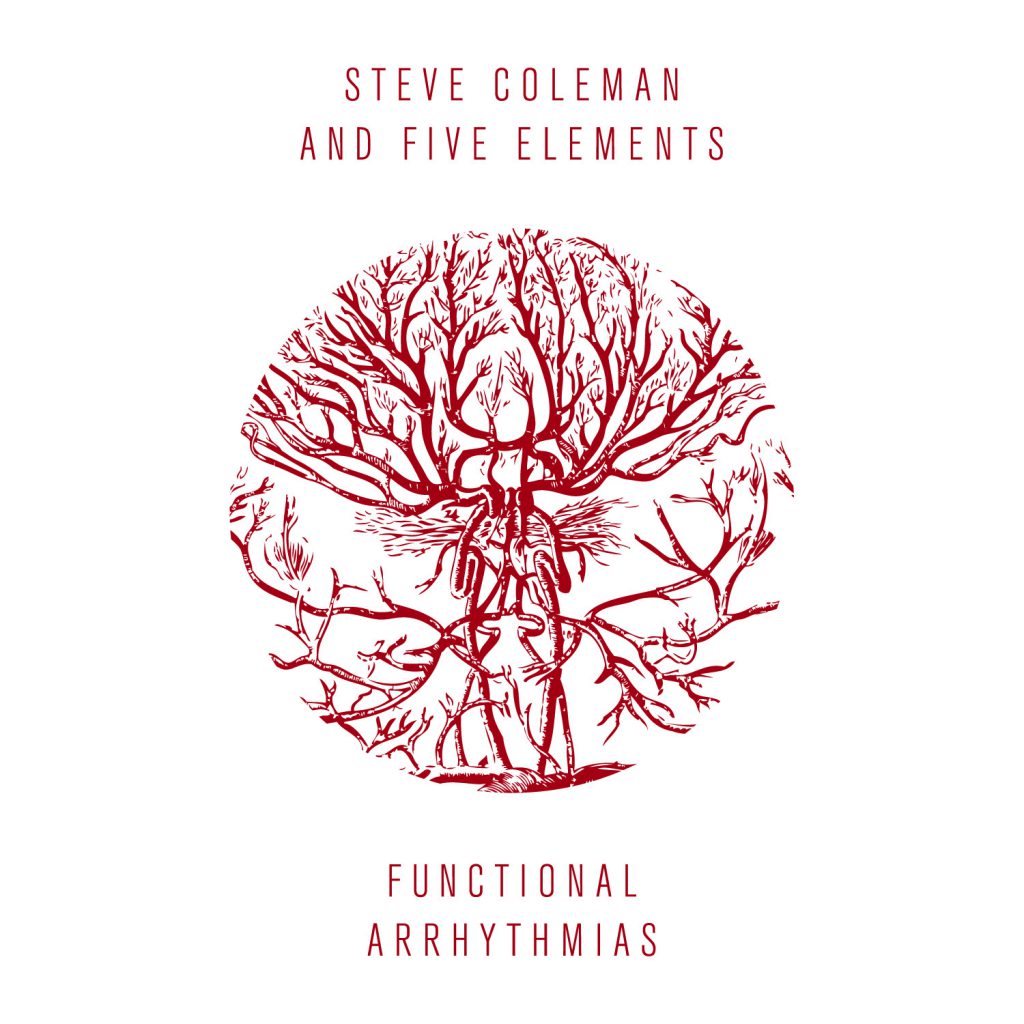 Functional Arrhythmias is the latest and most ambitious chapter in alto saxophonist Steve Coleman’s ongoing study into patterns found in nature in this case the various rhythms found inside the human body and using them as the building blocks for his highly individual musical language. The new CD follows on the critically acclaimed Harvesting Semblances and Affinities and The Mancy of Sound, both released on Pi Recordings. To help realize his latest musical vision, Coleman has revamped his band Five Elements by reenlisting two veterans: Sean Rickman on drums and Anthony Tidd on bass. Together with long-time member Jonathan Finlayson one of the most acclaimed young trumpeters on the jazz scene and guitarist Miles Okazaki, they possess the combination of intuition and experience to capture Coleman’s music in all its labyrinthine beauty.

The title of the album refers to the irrational rhythms found in healthy human heartbeat patterns and how many of its compositions utilize the heartbeat pulse (ternary or triple pattern). Coleman has long been fascinated with time-related themes, and Functional Arrhythmias is his attempt at creating a musical analogy of the rhythmic interaction between the circulatory, nervous, respiratory, and other biological systems of the human body. He also examines the effect of sensory stimuli on these relationships, and reflects them in the music. He credits the master percussionist and polymath Milford Graves — whose pioneering research into heart sounds and rhythms point to the connection between the human soul, biology and music — for providing the inspiration for his explorations.

Coleman employs an unusual process in creating these compositions: It usually starts with him improvising alone playing the saxophone and/or singing as he simultaneously beats out rhythms while visualizing some of the physical principles (shape, appearance, energy, vibration, movement, effect, etc.) of biological functions. These spontaneous sketches are then transcribed and other improvised sections overlaid to arrive at the final composition. The resulting layers of melodic and rhythmic counterpoint exhibit all the hallmarks of Coleman’s best work.

Five Elements, Coleman’s band since 1981, continues to be his primary vehicle for the expression of his music. This version of the band is notable for the return of Anthony Tidd on electric bass and Sean Rickman on drums, both of who first played with the band over 15 years ago. They bring a thorough understanding of Coleman’s systems and a muscular sense of groove to the music, but are at the same time flexible enough to navigate the complex rhythmic twists and turns that are characteristic of this music. The rest of the band is comprised of Jonathan Finlayson, who has been a member of Five Elements since 2000 when he was still a teenager, and Miles Okazaki, a relative newcomer who has released three well-received albums of his own as a leader. Finlayson, who is one of the most sought after trumpeters for his musicality and ability to tackle cutting-edge musical concepts, has appeared on an astonishing three New York Times #1 albums of the year in the last four years, including Coleman’s Harvesting Semblances and Affinities, Steve Lehman’s Travail, Transformation, and Flow, and David Virelles’ Continuum. He is also a member of guitarist Mary Halvorson’s quintet and appears on her acclaimed recordings Saturn Sings and Bending Bridges. He will release his debut recording as a leader, Moment and the Message on Pi Recordings in May.

For a quarter century Coleman has been known as the key proponent of M-Base, a musical and philosophical movement that incorporates elements from the folkloric music of the African diaspora fused with musical ideas influenced by ancient metaphysical concepts and patterns found in nature. He has conducted extensive research trips to Cuba, Ghana, Brazil, India, Indonesia, Senegal, Algeria, Ivory Coast and Tunisia to collaborate and learn from musicians from different cultures. Pianist and composer Vijay Iyer said in an article in The Wall Street Journal: “It’s hard to overstate Steve’s influence. He’s affected more than one generation, as much as anyone since John Coltrane.

Coleman has often stated his desire to “be able to look at a mountain and literally play the mountain and to look at the flight pattern of a bee, the flight pattern of a bird, and play that. Or have that directly influence my music, so almost be able to look at nature as one big gesture.” Of his latest endeavor, Coleman says: “All of the activities of the human body are connected in a miraculous fashion, like a giant musical composition that is constantly and spontaneously changing based on interactions with its environment.” Functional Arrhythmias is the latest in his fascinating and never-ending quest to express the relationship of mankind to everything else through his music.