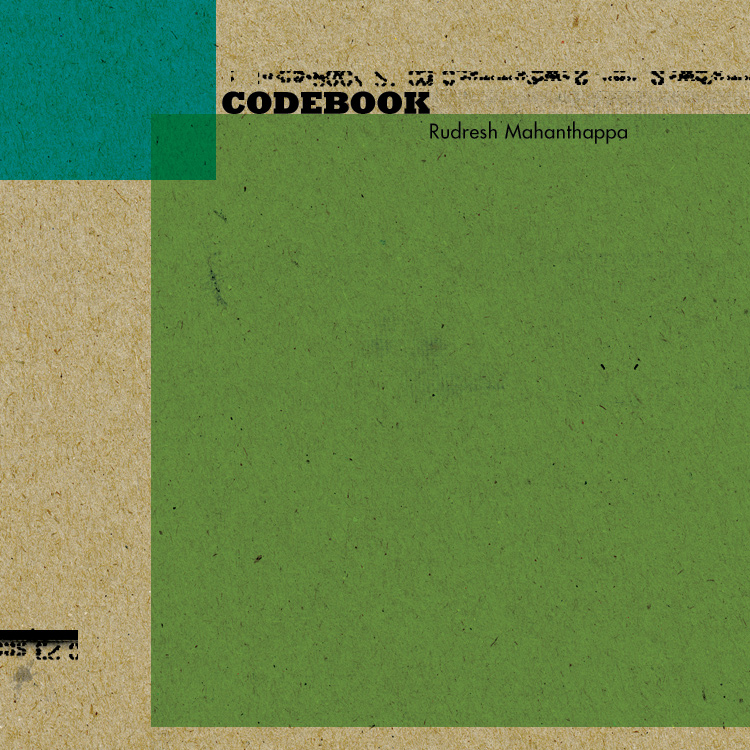 “Mahanthappas performance comes across much like a compelling narrator whose presence immediately puts you under his spell.”
— Mike Shanley, JazzTimes (http://jazztimes.com/reviews/cd_reviews/detail.cfm?article_id=17557)

“…A unique, jazz fueled occasion to explore ideas. Trowbridge called it the secret knowledge effectthat heightening of the senses from an awareness of hidden layers of meaningand I agree.”
— John Bohannon, Science Magazine (http://rudreshm.tripod.com/cgi-bin/science-1-07.pdf)

Once again the outside world has provided a launching point and a system of order to draw from for Rudresh Mahanthappas. The music on Codebook stems from ideas and concepts related to cryptography. The varied systems provided the groundwork for Rudresh to approach the DNA of the compositions from fresh and previously unexplored angles. A standard could be transformed into an entirely fresh piece, a melody conceived by encoding words or phrases, and cyclic rhythms reorganized by way of a cipher. All of this is to say that another structure of order has been applied to music, but has been done so with such care and thought that the result sounds in no way formulated. As with all of Rudresh’s music, the final product is quite surprising and intuitive. You can hear it in a track like “Play It Again Sam”, dedicated to Samuel Morse, where Rudresh opens and closes playing what could easily be Morse code. “D (Dee-Dee)” moves with a hint of a hard bop swing reoriented for a new audience. These pieces are just some examples of how the music never comes off sounding rigid or pastiche but instead as examples of a composers hand deftly working within a system and creating something entirely organic.

Evident throughout “Codebook” is Rudresh’s sense of humor. From the titles of the pieces, to song structure, to group interplay and beyond, the music on Codebook lives and breathes in a new way. The “Decider” kicks off with a line as twisted as the logic of the person who inspired the title. “Enhanced Performance” is just that. Without the help of any illegal musical substances, the group locks into a groove and never lets go. “Further and In Between” continues this muscular sound by beginning with a driving bass figure, that with the help of new drummer Dan Weiss, launches the band into one of its trademark powerful attacks. The CD’s nine tracks showcase the band’s handle of this tricky material and further emphasize why they are one of the today’s most creative and forward looking quartets.

Throughout the CD all of the hallmarks of Rudresh’s sound are present, his slightly tart tone, his complexly intertwined, but always logical, lines and his unique rhythmic sense. What is more present though, is the space in the music. Pieces such as “Play It Again Sam”, feature an openness between the individual musicians that was not as pronounced in previous recordings. The momentum of the music is now a gradual process. “Frontburner’s” duo opening is made all the more gripping by its harmonic bareness. From section to section within a single piece, there is a thoughtfulness and maturity evident in the music that speaks to the relationship between the band and the trust placed in them by Rudresh. A soulfulness permeates this music that was not as evident in the past.