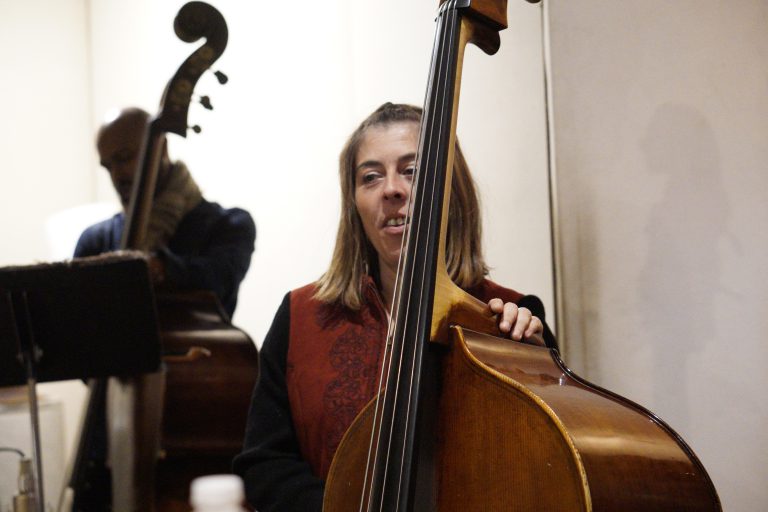 Silvia Bolognesi is a double bass player, composer and arranger. The most significant encounters in her musical training are those with William Parker, Muhal Richard Abrams, Lawrence “Butch” Morris, Roscoe Mitchell, and Antony Braxton. She was the winner of the “Top Jazz 2010”, by “Musica Jazz” as best new talent and in the same year winner of the “In Sound” trophy for double bass category. She leads several bands: Open Combo, Almond Tree, Xilo Ensemble, Ju-Ju Sounds, Fonterossa Open Orchestra, Young Shouts, Sly Family…

Since 2009 she is part of the international string trio Hear In Now with Tomeka Reid on cello and Mazz Swift on violin and vocals; with this trio they completed Roscoe Mitchell’s sextet in his Homage to John Coltrane in 2017.
In 2010 she founded her own label “Fonterossa Records”. She teaches double bass and combo class at the Siena Jazz Academy and at “Associazione Mosaico” in Colle Val d’Elsa (Siena). Since 2016 she is part of the “European exchange-Erasmus +” program for the Conservatory of Maastricht (Holland), Tbilisi (Georgia), Riga (Latvia), Birmingham (UK).
She runs workshops on Improvisation and “Conduction” since 2008