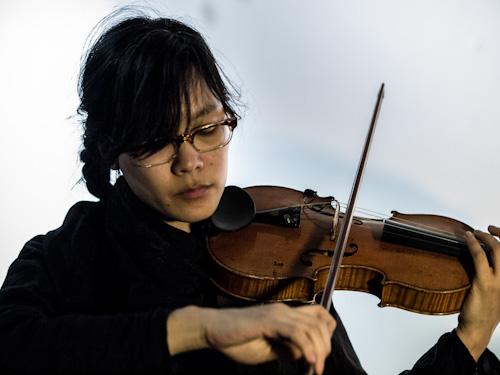 Jean Cook has been playing violin since 1979. She is part of the 11tet, a New York based jazz composer’s workshop, and is a founding member of the PnR Salon in Washington, DC, which brings together post-punk rockers and classically trained musicians. In 2000, she appeared at the Kennedy Center’s Hip-Hop Festival and the Smithsonian Folklife Festival with the Hip-Hop Philharmonic, a DC based live hip hop orchestra. Occasionally she plays around New York with the Dixieland group “Wriggle’s Red-Hot Agate-Cracking Jassers”. She currently records and performs with Beauty Pill, Gena Rowlands Band, Ida, Jenny Toomey, and Jon Langford/Ship and Pilot.

Jean produced and hosted “The Twentieth Century String Quartet” on WKCR-FM, New York from 1995-1996. She was the publicist for Washington Performing Arts Society for three years before moving to New York in 2000. Recently, she curated a western classical recital series for WPAS and produced the multimedia DIY opera, The Nitrate Hymnal. She currently works for a political group called Air Traffic Control that helps musicians to be more effective in the current election cycle.