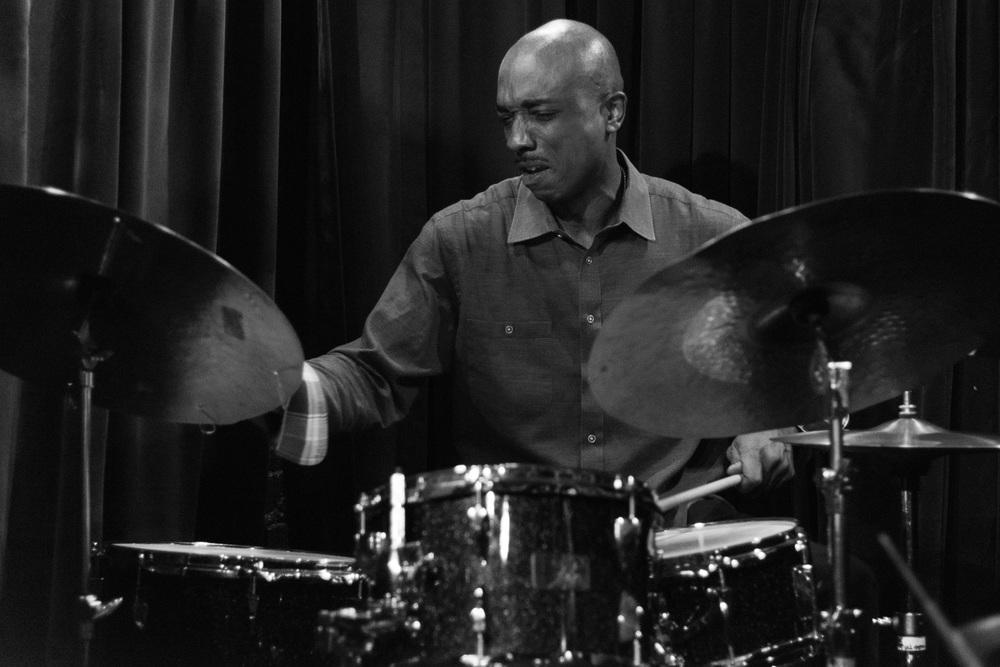 Born and raised in New York, Eric McPherson was immersed in music from birth on: Richard Davis, his godfather and an icon among jazz bassists, was present at his birth. It was Richard who suggested he be named after Eric Dolphy. Before Eric was three months old, his mother a superb dancer-choreographer deep in the jazz scene was taking him, strapped to her back, to rehearsals and performances. Her wide orbit of friends included lots of drummers, major jazz artists like Max Roach, Michael Carvin, Charles Moffett and Freddie Waits. Small wonder that Eric was beating on pots and pans before he could walk. At three, he told Elvin Jones, another household friend, that he was definitely going to be a drummer.

By the time Eric was eight, he was teaching himself to play on a drum set borrowed from Charles Moffett. At twelve, he started seven years of formal drum studies under Michael Carvin, a master drummer and a brilliant teacher. Within the year, he was jamming with another kid, Abraham Burton (now a major saxophonist). Together, they started doing street performances at anti-apartheid rallies, soon to be joined by young Nasheet Waits (now an up and coming drummer). A year later they were performing on-stage at Barry Harris’ Jazz Cultural Theater.

About the same time, Eric was admitted to New York’s prestigious LaGuardia High School of the Arts, a school for gifted students. Soon he was selected for the New York All City High School Big Band, making his Carnegie Hall and Lincoln Center debuts with the Big Band and winning several Outstanding Soloist Awards.

Upon graduating, his mentor Michael Carvin recommended Eric to Jackie McLean. That led to a full scholarship for attending the Jackie McLean Institute at the Hartt School of Music, University of Hartford. While still a student at Hartt, Jackie invited Eric to join the Jackie McLean Quintet along with Rene McLean, Alan Palmer and Nat Reeves. For the next 15 years, until Jackie’s recent death, Eric was his drummer, following in the distinguished footsteps of drummers Michael Carvin, Billy Higgins, Jack DeJohnette and Tony Williams. Over those years, Eric recorded two CDs with Jackie and performed with him at major venues and festivals all over the Far East, Middle East, Latin America, Europe, the Caribbean, and the U.S.