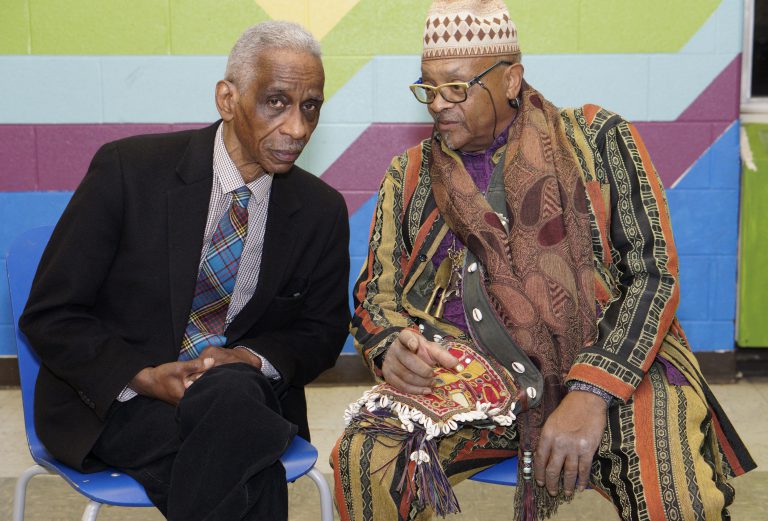 The Art Ensemble of Chicago is an avant-garde jazz ensemble that grew out of Chicago’s AACM in the late 1960s. The group continues to tour and record through 2006, despite the deaths of two of the founding members.

The Art Ensemble is notable for its integration of musical styles spanning jazz’s entire history and for their multi-instrumentalism, especially the use of what they termed little instruments. The group also uses costumes and face paint in performance. These characteristics combine to make the ensemble’s performances as much a visual spectacle as an aural one, with each musician playing from behind a large array of drums, bells, gongs, and other instruments.

Members of what was to become the Art Ensemble performed together under various band names in the mid-sixties, releasing their first album, Sound, as the Roscoe Mitchell Sextet in 1966. The Sextet included saxophonist Roscoe Mitchell, trumpeter Lester Bowie and bassist Malachi Favors Maghostut, who over the next year went on to play together as the Roscoe Mitchell Art Ensemble. In 1967 they were joined by fellow AACM members Joseph Jarman (saxophone) and Philip Wilson (drums), and made a number of recordings for Nessa.

In 1969, Wilson left the group to join blues singer/harmonica player Paul Butterfield’s band. That same year, the remaining group travelled to Paris, where they became known as the Art Ensemble of Chicago. The immediate impetus for the name change came from a French promoter who added of Chicago to their name for purely descriptive purposes, but the new name stuck because band members felt that it better reflected the cooperative nature of the group. They recorded Comme la radio with Brigitte Fontaine and Areski Belkacem as a drummerless quartet before welcoming percussionist Famoudou Don Moye to the group in 1970.

The ensemble returned to the United States in 1972, and the quintet of Mitchell, Jarman, Bowie, Favors and Moye remained static until 1993. Members of the group made the decision to restrict their appearances together, allowing each player to pursue other musical interests. It seems likely that this has contributed to the longevity of the ensemble. Despite the self-imposed limitations the Art Ensemble managed to release more than 20 studio recordings and several live albums between 1972 and 2006.

The makeup of the ensemble changed in 1993, when Jarman retired from the group to focus on his practice of Zen and Aikido. Bowie died of liver cancer in 1999, and the group continued as a trio (featuring a number of guest artists in their performances) until 2003, when Jarman rejoined the ensemble. In January of 2004 Favors Maghostut died suddenly during the recording of the group’s latest album, Sirius Calling. The group was joined for their 2004 tour by trumpeter Corey Wilkes and bassist Jaribu Shahid. The group re-united yet again in 2017 with trumpeter Hugh Ragin, cellist Tomeka Reid, bassists Shahid and Junius Paul, and early members Mitchell and Moye.

Ensemble members embrace the performance art aspects of their concerts, believing that they allow the band to move beyond the strict limits of jazz. Their operating motto is Great Black Music: Ancient To the Future, which allows them to explore a wide variety of musical styles and influences; the band’s distinctive appearance on stage also reflects this motto. As Jarman describes it, So what we were doing with that face painting was representing everyone throughout the universe, and that was expressed in the music as well. That’s why the music was so interesting. It wasn’t limited to Western instruments, African instruments, or Asian instruments, or South American instruments, or anybody’s instruments.