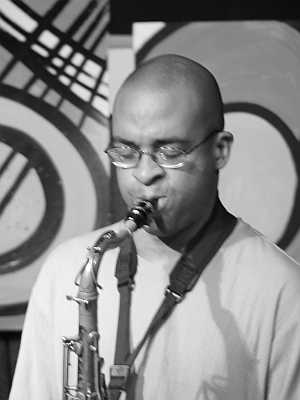 Aaron Stewart is a saxophonist and composer based in New York. He is currently a member of the Collective Identity saxophone quartet and performed frequently with Muhal Richard Abrams, with whom he also studied composition. Stewart has also performed with Andrew Hill’s Point of Departure Sextet. Among his many accomplishments, Aaron was commissioned as a composer in 1999 by the multidisciplinary performance group Tonk. He participated in Cecil Taylor‘s 35-musician ensemble during its legendary weekly series at the Knitting Factory, and has performed in the AACM concert series as a sideman with Abrams, George Lewis, Reggie Nicholson, and Ed Wilkerson. He performed in the premiere of Anthony Braxton‘s Composition 189 for 10 instrumentalists during his 3-day Ghost Trance festival and was also a featured soloist in Braxton’s opera Composition 162, Shala Fears for the Poor. His discography includes Muhal Richard Abrams’s record Song for All Steve Coleman‘s large-group album Genesis, Vincent Chancey‘s Next Mode, Collective Identity’s The Mass, and Vijay Iyer‘s Architextures.