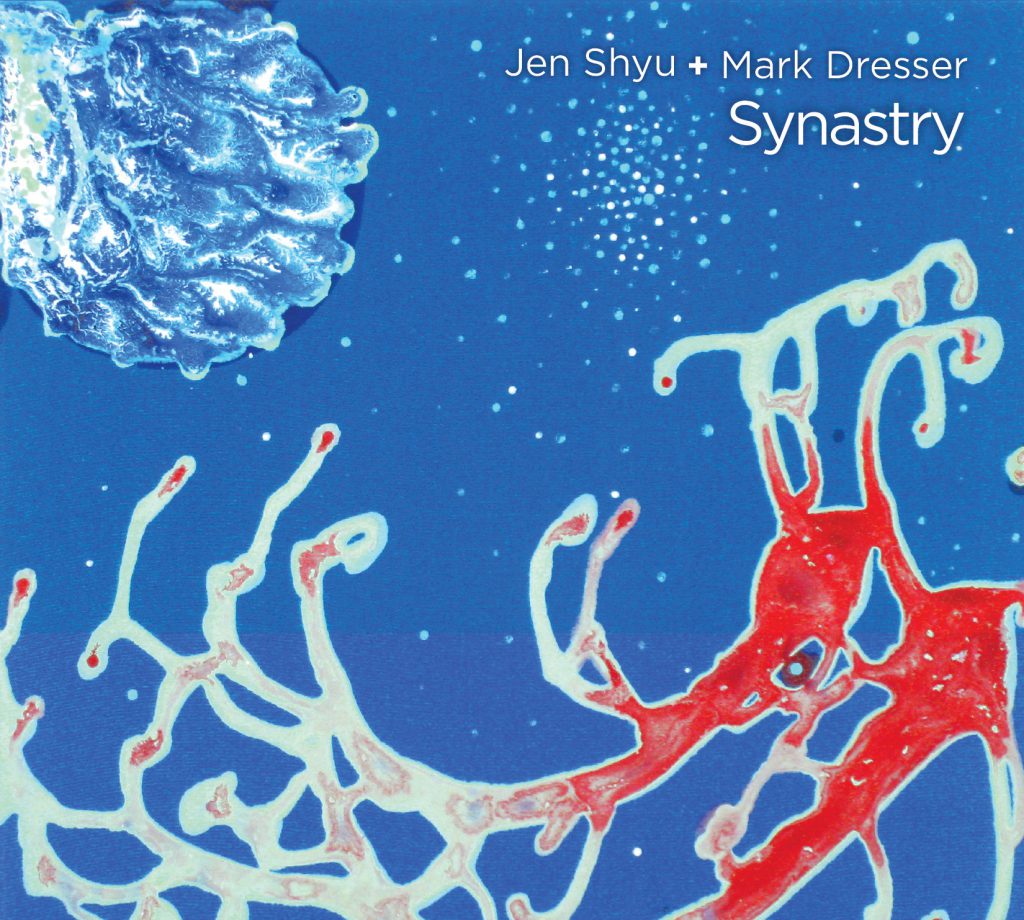 “Ms. Shyu is among New York’s most invigorating vocal presences. And perhaps the most enigmatic.” Larry Blumenfeld, The Wall Street Journal

“There have been vocal-and-bass albums, but none have sounded like this… her intervallic leaps tug on the ear and reward a deep listen to this challenging set.” – Mike Shanley, Jazz Times

“The pair find a wealth of colors and moods within the seemingly limited palette of voice and bass… The vocalist’s control is remarkable.” ★★★★ Shaun Brady, DownBeat

Synastry is a partnership between the ground breaking vocalist Jen Shyu and master bassist Mark Dresser that demonstrates new possibilities for vocal and bass improvisation. They reveal a remarkable chemistry together, evoking a range of emotions from plaintively wistful to emotionally intense, with lyrical imagery that is fantastically surreal. A member since 2003 of influential saxophonist Steve Coleman’s band Five Elements, Shyu is well known for her tonally exacting and rhythmically incisive singing. On Synastry, accompanied only by Dresser’s acoustic bass, her voice is thrown into stark relief, giving full evidence to her complete control of microtonal shadings, her deep sense of rhythm, and highly developed ear for lyrical and melodic improvisation. In addition to English and Chinese, she sings in a wholly improvised vocalese that utilizes phonemes derived from her fluency of seven different languages learned through her research of indigenous music in Indonesia, East Timor, China, Taiwan, Brazil and Cuba. Dresser, who is well known for using extended technique to tap the full sonic potential of the acoustic bass, envelops Shyu’s voice in an aura of intimate mystery.

What makes Synastry special is the musical cohesion between Shyu and Dresser. Shyu says of their partnership: “When Mark and I did our first session, we found that it opened so many new opportunities for space and sound exploration that we never felt the need to include other instruments. Together, we really push the possibilities of each of our instruments, exposing their full range in texture and musical function in a way that we feel is unique in the lineage of voice and bass duos.”

A central figure in avant garde jazz for more than three decades, Dresser has appeared on over 130 albums including nearly 30 as leader or co-leader. He has recorded and performed with Anthony Braxton, Tim Berne, Anthony Davis, Dave Douglas, Joe Lovano, Roswell Rudd, Henry Threadgill, Dawn Upshaw, John Zorn and many others. He’s currently in the cooperative group Trio M with pianist Myra Melford and drummer Matt Wilson. Dresser contributes five of the eleven compositions on Synastry. Just as important, he brings with him virtuoso technique and the imagination to put it all to work. Not content just to provide support, Dresser constantly varies his attack, often quick-changing between arco and pizzicato while paying constant attention to texture, timbre and dynamics. Shyu said of Dresser: “His musical vocabulary is huge and his entire range is developed. He plays with such a vast palette of colors that it pushes me to do the same with my voice. Every gesture of his is so evocative that it is very easy to go beyond the usual elements of music making with him. When singing with Mark, I feel like I am both falling inward into the sound and exploding outward from it simultaneously. For an example, listen to ‘Chant for Theresa Hak Kyung Cha’ for how he continuously shifts between earthy rumbles and soft whispers to evoke the words like stone, dust, powder, sediment, and moisture and brings aural color to dark, blue-black, pale, luminant, and stillness found in Cha’s text.”

A child prodigy on the violin and piano, Shyu was accomplished enough to place sixth at the Stravinsky International Piano Competition at the age of 11. She also studied ballet and theater and later majored in classical voice at Stanford University. She sings in multiple languages, including English, Portuguese, Spanish, Mandarin, Taiwanese, Tetum, and Pinuyumayan (a Taiwanese indigenous language). She also regularly accompanies herself on piano; erhu, a Chinese spike fiddle; Taiwanese moon lute; and East Timorese lakado.

Rather than pursuing the traditional path for a jazz singer, Shyu is seeking her own way, fearlessly using her prodigious technique to create art with no limits with regard to musical genre. Though grounded in classical, opera and jazz training, her overarching goal is to carve out new improvisational terrain for the voice through integrating traditional and indigenous music discovered through rigorous research and fieldwork. Her research trips have taken her to Cuba to study traditional dance and music; Taiwan, her fathers homeland, where she studied Hengchun minyao, an indigenous folk music; China where she researched shuochang, a form of narrative performance that involves a combination of singing and speaking; and East Timor to research and document the music of her mothers birthplace. All this while an integral member of Steve Coleman and Five Elements, appearing most recently on the critically lauded release Harvesting Semblances and Affinities (Pi, 2010) and the upcoming The Mancy of Sound (Pi, 2011). True to form, just as she is finding wider recognition, she will be spending the next year in Solo, Indonesia on a Fulbright Scholarship to study sindhenan, the traditional singing of Javanese gamelan music.

Dresser said about Shyu: “Working with Jen is not like working with a singer; it is more like working with one of the top players on the scene who happens to sing; her musicianship is incredible and her improvisational ability so highly developed. She is also a musical scholar in the best sense of the word. Steve Coleman said: “She is a case study for substance over appearance. When most musicians, particularly singers, would be focusing on career moves, Jen is taking the time in the prime of her life to do musical, personal and cultural research, and to develop the kinds of understanding and tools that she will be able to use for the rest of her life.”

Jen Shyu is the first woman and first vocalist, and Mark Dresser the first bassist, to record as a leader on Pi for good reason. They both bring cutting-edge technique along with a wealth of imagination and creativity along with an unwillingness to settle for easy moves. You can’t tell Shyu that she shouldn’t challenge herself to sing with the same attention to harmonic movement, rhythmic assurance, and pitch precision as master instrumentalists any more than you can tell Dresser to just play walking bass lines. Together they demonstrate that jazz singing doesn’t have to be trapped in a world of musty clichés; that there exists an exciting new path to the future of this art form.