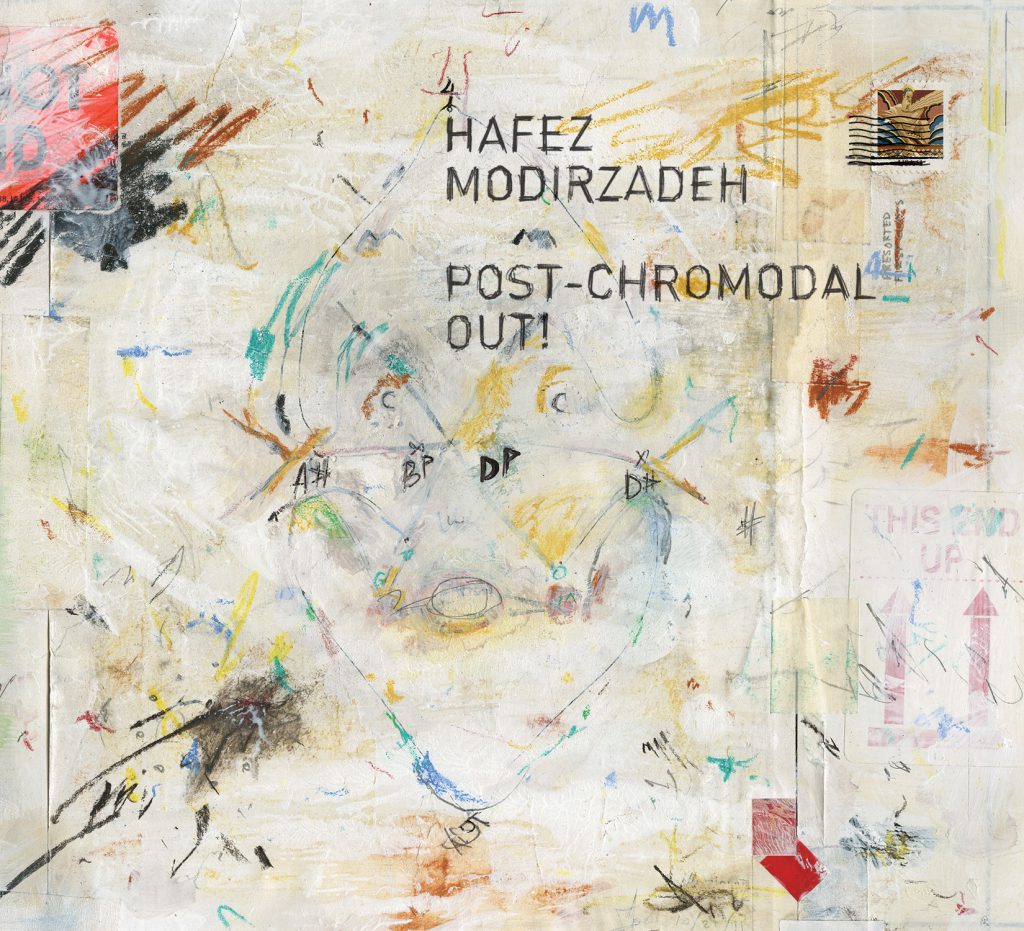 “Highly innovative, Post-Chromodal Out! manages to seamlessly bridge the exotic and the familiar into one of the most captivating releases of the year. – [CultofMontreal.com], Lawrence Joseph

“Saxophonist Hafez Modirzadehs new album Post-Chromodal Out! is the result of a 30-year quest for a radically cross-cultural music. — Giving musicians this new kind of freedom seems to be a big part of it for Modirzadeh. He talks about his piano tunings and his musical ideas generally as being a kind of bridge that he hopes will carry a younger generation to new places. — In his own way, Modirzadeh’s passing along the kind of freedom he found, many years ago, in Charlie Parkers music.” – [PRI’s The World], Bruce Wallace

“A collection of pieces largely for an improvising quintet, it borrows the syntax of modern jazz, but pointedly alters the inflection. At times the albums sonic effect can suggest a slightly warped vinyl LP playing at a wavering r.p.m., though its guiding mission makes you aware of the cultural biases that call such an image to mind. — Its the sound of the piano, played with dauntless enterprise by Vijay Iyer, that gives Post-Chromodal Out! its strongest pull of disorientation. — Theres a lot of Ornette Coleman in Mr. Modirzadeh’s approach to small-group polyphony, and a lot of Don Cherry in his notions of a hybridized language. At times, as on the variation titled “Facet Twenty-two”, theres even a direct echo of the Coleman-Cherry front line. But this music including a suite called “Wolf & Warp”, composed for the group by James Norton, on commission urges apprehension on its own terms. Theres heady discipline at work here, along with the stirrings of a hard-fought individualism.” – [The New York Times], Nate Chinen

“Saxophonist Hafez Modirzadeh seems right at home on Pi Recordings, who have steadily assembled a roster of serious conceptualists. — This quintet the leader on tenor and soprano, trumpeter Amir ElSaffar, pianist Vijay Iyer, bassist Ken Filiano and drummer Royal Hartigan plays with so much range and feeling and technique that they at times sound nearly orchestral. At the heart of these often head-turning effects is the integration of standard and Iranian classical tunings and intonations to shape improvisational possibilities. — The effect of Post-Chromodal Out! is like having your head buffeted by a barrage of head-scrambling information, all of it resisting conventional listening, and most emphatically not announcing itself as anything close to conventional jazz-plus-exotica. Its a powerful statement from a composer, instrumentalist, and band that deserve your time and acclaim.” – [Dusted], Jason Bivins

“Hafez’s new release on Pi Recordings, Post-Chromodal Out!, is a manifesto in resonance. On it, you hear Hafez’s barrier-breaking new post-chromodal approach embodied by Vijay Iyer, who plays a de-tuned piano; the front-line team of Hafez and Amir ElSaffar, whose previous collaboration Radif Suite (Pi) was described by The New York Times as scintillating a radical cultural exchange; and the rhythm section of Ken Filiano and Royal Hartigan, with whom Hafez has been working for decades.” – [Jazz Speaks]

Post-Chromodal Out! is an important new release from Pi Recordings that represents the next step in composer/saxophonist Hafez Modirzadeh’s 30-year quest to create a seamless exchange of musical structures across all cultures. It is the culmination of a system he calls “chromodality”, which Modirzadeh originally developed to integrate Persian tones with Western equal temperament to further explore harmonic possibilities in jazz. He has since expanded his concept to encompass a “post-chromodal” approach in which all kinds of intervals co-exist; one with meta-cultural potential that allows each musician to use his own distinctive voice to explore music from a full palette of tonal possibilities. The result is not simply some sort of mash-up; it is no less than an effort to altogether transcend cultural differences.

The post-chromodal concepts were first put into practice by Modirzadeh with Iraqi-American trumpeter Amir ElSaffar in their co-led project Radif Suite (Pi 32), which the New York Times called scintillating a radical cultural exchange and thick with ideas and inspiration by the Los Angeles Times. Here, as on Radif, Modirzadeh and ElSaffar utilize extended technique to achieve intervals between major and minor. Through the use of alternate fingerings and changes in embouchure, they are able to subtly manipulate pitch, allowing them to break free of the boundaries of equal temperament into new tonal orientation. Post-Chromodal Out!, however, takes the concept one step further through the introduction of a piano re-tuned to variations on Persian temperaments devised by Modirzadeh. Set with three-quarter tones (not quarter tones, but large half-steps, or small whole-steps) integrated with intervals common to equal temperament, the instrument requires the pianist to take a completely new approach. Leaping headlong into this music is pianist Vijay Iyer, who takes on the re-tuned instrument with an improvisatory mastery befitting his own reputation for combining jazz with the music of different cultures. Modirzadeh had this to say about Iyer: “I have approached many pianists over the years, but Vijay was the only one to physically sit down at a beat-up old upright I had retuned, to trust in the possibilities, and make it happen. His confidence to move through vulnerable realms demonstrates great mental endurance, collaborative spirit, patience and love. He applied enormous will and understanding, taking on what is at stake with uncompromising determination.” The band also includes Ken Filiano on bass and Royal Hartigan on drums, both of whom have worked with Modirzadeh for over 25 years and each a seasoned explorer of cross-cultural musical possibilities in his own right. Also on board are guest artists Danongan Kalanduyan on the Filipino kulintang, Faraz Minooei on santur, and Timothy Volpicella on electric guitar, who help to further establish the meta-cultural nature of this music.

Modirzadeh, who is of Iranian-American descent, grew up mostly in Northern California and started playing saxophone at the age of 12. He spent his teenage years hanging out at clubs like the Keystone Korner in San Francisco, seeking guidance and inspiration from many of the saxophone legends who passed through town like Sonny Stitt, Dexter Gordon, James Moody, Joe Henderson, and Sonny Simmons. After graduating college he studied for a time at New England Conservatory before returning to California to continue studying the Persian dastgah with master musician Mahmoud Zoufonoun. These teachings helped convince Modirzadeh to pursue his own path in jazz, one steeped in the musical traditions of Iran. He received his masters from UCLA before moving to the East Coast in the mid-1980s to try out the New York jazz scene and to pursue a doctorate at Wesleyan University. It was during this time that he developed his original chromodal concept, which was subsequently the subject of his doctoral dissertation. In New York he played with groups such as Charlie Persip’s Superband and Fred Ho’s Afro-Asian Ensemble but overall found that attempts to try out his new concept were mostly met with disdain. He tells of a typical scene: “I went to a popular jam session in lower Manhattan to try this concept in public. Before the end of my first chorus, the leader of the session pulled the horn out of my mouth and dragged me off the stage by my neck strap, yelling ‘You can’t just get up here and play like that!'”

Modirzadeh would eventually move back to California, where he is now a Music Professor of World Cultures at San Francisco State University. As years turned into decades, and although awarded two NEA Fellowships and a Fulbright, still, the feeling never escaped Modirzadeh that his life’s work was slowly dying on the vine. The story might have ended there if not for a serendipitous visit to Ornette Coleman’s home in New York City in 2007. Modirzadeh had been interested in finding out how it was that after years of developing his own musical approach through Persian and various other non-western systems that he would somehow arrive at a tonal language similar to Coleman’s. A single afternoon visit turned into days of discussion and playing, leaving Modirzadeh convinced of the need for a universal post-chromodal approach that breaks free of all cultural barriers. Consequently, Coleman invited Modirzadeh to play with him at the 2007 San Francisco and Monterey Jazz Festivals.

A year later, the reinvigorated Modirzadeh met Amir ElSaffar at a recording session in New York. According to ElSaffar their connection was immediate: “Our chemistry was uncanny, unlike any I had experienced with any other musician. Beyond our similar cultural backgrounds, there was a resonance in his sound, and openness and acceptance in his approach that encouraged creativity and spontaneity every time that we played together.” ElSaffar proceeded to study with Modirzadeh, and their partnership results in the release of Radif Suite in 2010.

Vijay Iyer says of Modirzadeh: “The scope of Hafez’s synthesis of concepts across cultures is staggering. There is great detail in his critical engagement with traditional intervallic systems, tuning systems, and modes, and there is also a grand sweep to his vision across disciplines and historical eras. In spite of its technical complications, there is genuine heart to this music and a real spiritual clarity. Modirzadeh is not simply a scholar or musicologist, but a genuine artist, with a profound, lifelong stake in the unification of research, creative work, and personal inner quest that is expressed in his music.”

Post-Chromodal Out! is comprised of two suites: “Weft Facets” by Modirazdeh and “Wolf and Warp” by James Norton, who was commissioned by Modirzadeh to compose an independent work with the intention of demonstrating the expansiveness of this approach to re-tuning. When asked the reason for his urgent imperative to re-tune the piano, Modirzadeh replied: “The standardized temperament for piano, as beautiful as it is, carries an unbalanced weight of influence over players and listeners, leading many to believe that there is no other resonance to work with but this one. This creates a value system that is unjust and ultimately limits the discovery of other, more personal tuning possibilities. By retuning the piano the one instrument that imposes a dominant influence on the worlds music the musician is freed to explore all tonal possibilities.” The result is music that is like nothing that has been attempted before, one that promises to shake the harmonic foundation of Western cultures tempered system.