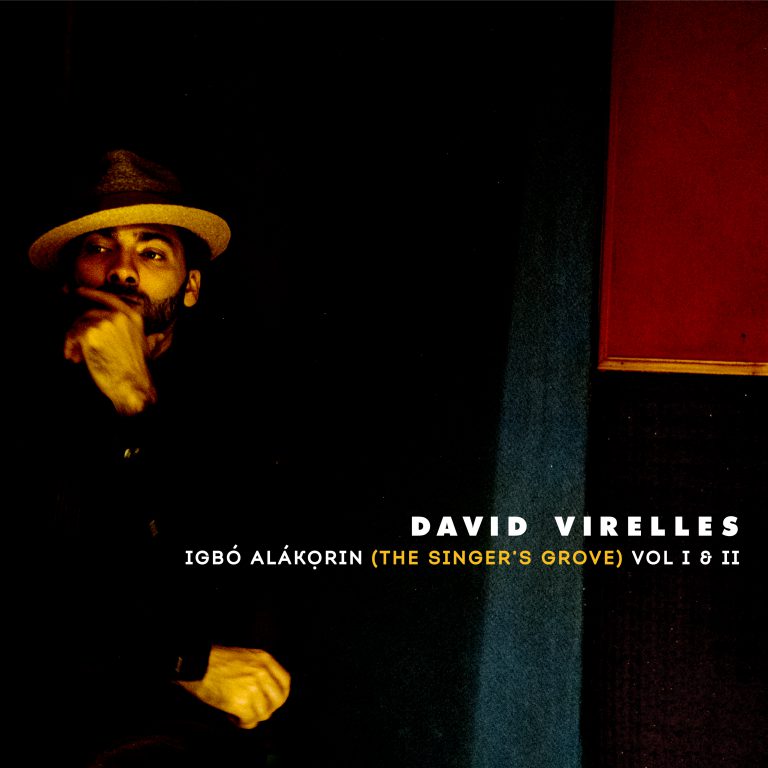 Igbó Alákọrin (a phrase in Yoruba which can be loosely translated as The Singer’s Grove) is the realization of pianist David Virelles’s long-held dream to document the under-sung musicians of his birthplace, Santiago de Cuba. Virelles, who was named the #1 Rising Star Jazz Pianist in the 2017 Downbeat Critics Poll, is one of the most in-demand pianists on the contemporary jazz scene, recording with the likes of Henry Threadgill, Chris Potter, and Tomasz Stanko. He also has four prior releases under his own name, including Continuum, which topped the New York Times best album list for 2012. Legendary Cuban pianist Chucho Valdés calls Virelles “an innovator and a perfectionist, a young virtuoso who is the most creative and advanced of our jazz pianists.”

The picturesque town of Santiago in the Oriente region of southeastern Cuba has historically been an important breeding ground for music on the island. It’s the home to musical styles such as son, changüí, nengón, conga, as well as traditions inherited from Haiti. Since leaving home in 2001, each time Virelles returned he would make it a point to seek out and reconnect with the elders of Santiago’s rich musical tradition, many of whom he knew as family friends through his parents who are also musicians. According to Virelles, “Growing up, I never really knew them as the super-important musical figures that they are; just as members of my extended family. It wasn’t until after I immigrated that my perception of my own culture expanded partly because, ironically, I had more access to historic documents here than I ever did in Cuba. Now I feel a responsibility to further their legacy through exposing people to their work, as well as through my original contemporary work. I feel extremely fortunate to have been able to assemble for this album some of the legends, all of whom are still at the peak of their craft. They have never received recognition beyond their Santiago community, but they remain arguably amongst the last living resources from our music’s golden era. After years of thinking and planning, I am very excited that this dream has finally become a reality.”

Igbó Alákọrin is made up of two distinct projects: Volume I – David Virelles Introduces Orquesta Luz de Oriente traces the roots of the Cuban big band tradition and encompasses various genres/styles associated with the rich musical legacy of Santiago: danzón Oriental, chepinsón, bolero and trova. In particular, it was conceived to showcase the music of Electo Rosell (Chepin, of the legendary Chepín-Chovén Orchestra) and Mariano Mercerón, who were important pioneers in the percussion-propelled Cuban big band sound of the 1930s. Their work was inspired by African-American groups, yet it had very profound rhythmic connections to folkloric lineages native to the Oriente region of Cuba. In its heyday, the Chepín-Chovén Orchestra was a fixture at many venues, including the sociedad de mulatos Luz de Oriente. This society club, which was located in a building still standing in Santiago, is the inspiration behind the name of Virelles’s ensemble. It features the voices of Emilio Despaigne Robert, a veteran sonero (lead vocalist) of the Santiago group Los Jubilados, and Alejandro Almenares, who is also featured on his sublime requinto guitar. Many consider Alejandro – the son of trova legend Ángel Almenares – the last of the old style trovadores, a lineage dating back to the 19th century with deep roots in Santiago. The younger Almenares learned his craft at informal home gatherings from his father and his father’s friends, which included Sindo Garay, one of the four greats of trova. The rest of the band include José Ángel Martínez (bass), who has recorded with Buena Vista Social Club’s Eliades Ochoa; Lázaro Bandera (congas) is the director of La Conga de Los Hoyos, one of Santiago’s foremost carnival music groups; Román Filiú (alto saxophone) who originally made a splash in Havana with Isaac Delgado and Chucho Valdés’ Irakere in the 1990s and has since moved to New York where he has recorded with the likes of Henry Threadgill and David Murray as well as leading his own groups; René “La Flor” Domínguez (tenor saxophone), who has been a mainstay of the Santiago music scene for the last half century; Baudelis Rodríguez (baritone saxophone), a young talent who plays with the world-renowned Santiago-based Magic Sax Quartet; Abel Virelles (trumpet), David’s younger brother who learned about Cuban styles of trumpet playing from the late Inaudis Paisán, who played with Chepín; José Aquiles Virelles (chorus), David’s father who is a prominent nueva trova singer and composer with a career spanning 40 years; and Gabriel Montero (pailitas criollas, claves) who is a percussionist in the Grammy-winning Septeto Santiaguero.

On Volume II – Danzones de Romeu at Café La Diana, Virelles reinterprets the piano music of the iconic early-20th Century pianist/composer Antonio María Romeu, exploring his practice of playing danzónes accompanied only by güiro. The title refers to the legendary Café La Diana in Havana at which Romeu regularly performed starting the turn of the 20th Century. Virelles explores Romeu’s signature harmonic, melodic and rhythmic devices, as well as specific left hand figurations on the piano. He is accompanied by the master güirero Rafael Ábalos, a danzón specialist and veteran of Oriente charangas such as Típica Juventud and Estrella De La Charanga. Ábalos has been an invaluable resource in realizing this entire project, hipping me to long lost and forgotten recordings, hooking up our rhythm team and passing on secrets of this much talked about but forever mystical genre of Cuban music, the danzón.

A product of deep historical and cultural research, Igbó Alákọrin is another chapter in Virelles’s ongoing pursuit to create music that transcends the boundaries between the folkloric and contemporary to reveal an essence beyond any genre. It’s also a homecoming that documents a collaboration with roots in family, community and culture. The sessions were recorded at Santiago’s E.G.R.E.M. – Siboney studio, where Virelles grew up attending his father’s late night recording sessions and made some of his first professional recordings. Unusual for a modern recording, all the musicians played in one room, and one immediately senses the music’s urgency and power, with the instruments blending in a way that can only be achieved in that setting. The album has the feeling of having entered a time warp, juxtaposing music from a long bygone era that reflects Virelles’s desire to preserve contextual, historical and cultural nuances with improvisational elements that reflect Virelles’s experience in the New York jazz community. As Chucho Valdés says: “David’s work is immersed in research. He knows our African roots with depth. Tradition and avant-garde come together in this offering of the highest order. What a marvel! Thank you, David, for making us happy and proud, and for updating our traditions.”