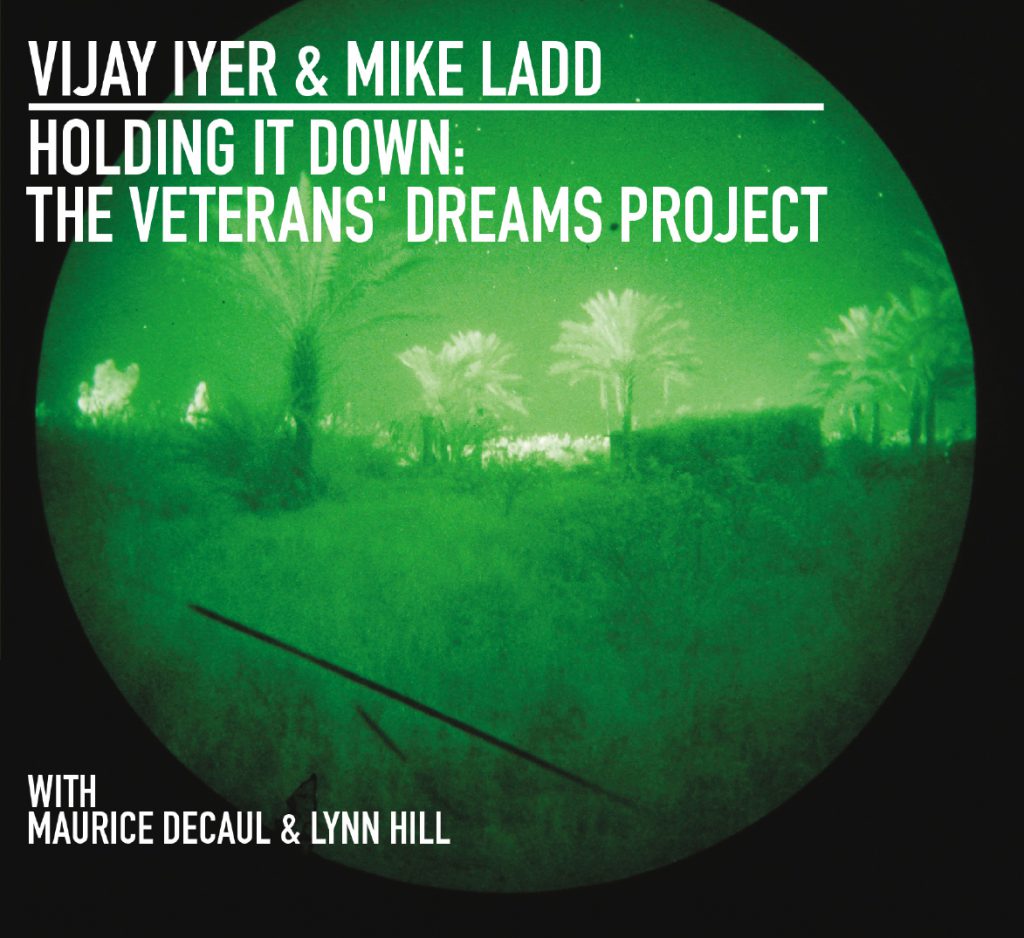 Holding It Down: The Veterans Dreams Project is the latest astonishing album to emerge from the longtime collaboration of Grammy-nominated pianist/composer Vijay Iyer and poet/performer/librettist/emcee Mike Ladd. Three years in the making, the new work focuses on veterans of color from the last decades wars in Iraq and Afghanistan. Holding It Down is a thought-provoking, sometimes frightening, and ultimately exhilarating combination of music, poetry and song, created from the actual dreams of young veterans of the Iraq and Afghanistan wars. The new album continues in the groundbreaking, politically searing, stylistically omnivorous fashion of their previous works (the award-winning In What Language? (Pi 2004), based on interviews with people of color in airports, and the acclaimed Still Life with Commentator (2007), an oratorio about 24-hour news culture). These earlier projects were described by The Boston Globe as “a triumph of a genre that doesn’t exist”, hailed by JazzTimes as “unfailingly imaginative and significant”, and praised for their “powerful narrative invention and ravishing trance-jazz… an eloquent tribute to the stubborn, regenerative powers of the human spirit” in Rolling Stone. Together with the earlier Iyer-Ladd creations, Holding It Down rounds out a wide-ranging trilogy about American life over a decade of war.

In Holding It Down, Iyer and Ladd explore the experiences of American veterans of color of these post-9/11 wars through the medium of dreams. For the project, which was commissioned and premiered at Harlem Stage in New York City, Ladd (along with theater director Patricia McGregor) interviewed scores of veterans both their aspirations and the visions they experience while sleeping, which are by turns disturbing and mundane, ranging from combat-related nightmares and stress dreams to comically surreal fantasies. Ladds lyrical adaptations of these accounts are juxtaposed with Iyer’s lush, potent music, and with first-person poetic contributions from Maurice Decaul, a writer who served with the Marines in Iraq, and Lynn Hill, who served in the Air Force and was tasked with piloting drones over Afghanistan from a base in Las Vegas. Decaul and Hills original, brave, from-the-gut contributions and performances became the soul of this project.

As Iyer said in a 2012 interview for the NEA’s blog, “When you’re dealing with veterans in a performing arts environment, its not just a project thats about them, or that’s depicting them – it is them”. So you have the reality of their presence erupting into the work, intervening in this artistic experience. Decaul says about his participation in the project: At that time, I was just beginning to come to terms with my memories and dreams related to my deployment. I knew that the best way to move forward with my life was to engage with them directly and to learn to manage and accept them as part of the cost of war. I also believe it is my duty to write about the war so we don’t forget about its effect on those who have served.

Today’s soldiers of color often enlist out of need or perceived need; are rapidly deployed into an international arena of war and imperialism; and come home to face indifference, bureaucracy, and disproportionately high unemployment. How do soldiers battle with the psychological remnants of war after returning home? How does the new breed of war veterans go about their irreversibly altered lives? How do they move from the unspeakable back to the speakable? What are they able to dream about? How are they able to hold it down? The songs in this project contain some of their very real and complicated answers.