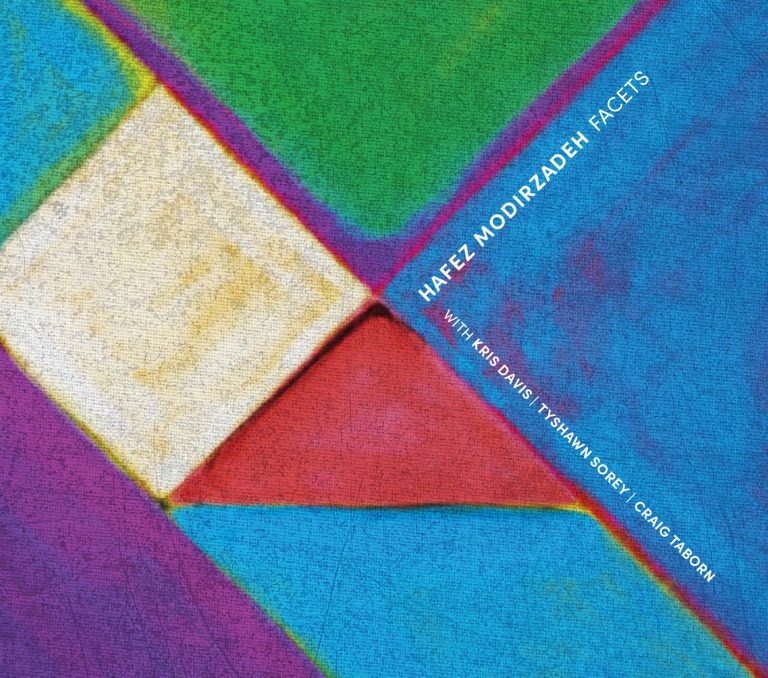 Facets is saxophonist/composer Hafez Modirzadeh’s latest radical entreaty against the cultural hegemony of the Western notion of equal temperament and his argument that musicians should be free to explore a variety of tonal possibilities, even on piano. His 2012 release Post-Chromodal Out! was the first documentation of this concept, where the piano was tuned to a variety of temperaments. Performed with pianist Vijay Iyer, The New York Times called that album “Dauntless… There’s heady discipline at work here, along with the stirrings of a hard-fought individualism.” With his new release, Modirzadeh has distilled the idea to a single re-tuning, which is performed in duets with three towering musicians in contemporary improvised music: Kris Davis, Tyshawn Sorey and Craig Taborn, each interrogating the piano’s new possibilities with imagination and ingenuity. Modirzadeh himself utilizes alternate fingerings and embouchure adjustments on his instrument to achieve intervals between major and minor, and the pieces sway with an elasticity reminiscent of Persian poetic meter. With eight keys re-tuned and the remainder left in equal temperament, the music explores the coexistence of familiar with unfamiliar, and in the process, discovers new logic and mysterious beauty within.

Modirzadeh, who the San Jose Mercury News has called “visionary,” described the imperative to re-tune the piano this way: “The standardized temperament for piano, as beautiful as it is, carries an unbalanced weight of influence over players and listeners, leading many to believe that there is no other resonance to work with but this one. This creates a value system that is unjust and ultimately limits the discovery of other, more personal tuning possibilities. By retuning the piano – the one instrument that imposes a dominant influence on the world’s music – the musician is freed to explore all tonal possibilities.” This urge is the culmination of a system he originally called “chromodality,” which he developed to explore the harmonic possibilities of integrating Persian tones with Western equal temperament. The concept has since evolved to allow all intervals to co-exist, which empowers each musician to use their own distinctive voice to explore music from a full palette of tonal possibilities, irrespective of cultural background. The tuning Modirzadeh has chosen for this program was one that spoke to him personally after much testing and tweaking. Vijay Iyer says of Modirzadeh: “The scope of Hafez’s synthesis of concepts across cultures is staggering. There is great detail in his critical engagement with traditional intervallic systems, tuning systems, and modes, and there is also a grand sweep to his vision across disciplines and historical eras. In spite of its technical complications, there is genuine heart to this music and a real spiritual clarity. Modirzadeh is not simply a ‘scholar’ or ‘musicologist,’ but a genuine artist, with a profound, lifelong stake in the unification of research, creative work, and personal inner quest that is expressed in his music.”

Interested in hearing the different approaches that each musician will bring to the concept, Modirzadeh has been inviting pianists from various disciplines to engage with this music. For the recording of Facets, Modirzadeh chose three of the most acclaimed musicians in improvised music: Kris Davis is recognized as one of the foremost pianists in jazz. Her release Diatom Ribbons (2019) topped most year-end lists as best album of the year. For a quarter century, Craig Taborn has been similarly recognized as a master of sheer invention on the piano. Tyshawn Sorey, who is a stalwart with Pi Recordings, has won recent praise for the premiere for his new works with the Seattle Symphony and Detroit Symphony Orchestra. Primarily known as a drummer, he brings the same sensitivity and openness to discovery as the other pianists. They were sent the scores in advance, but their first encounter with the actual re-tuned piano was at their respective recording sessions. Each musician works from the same set of pieces, spending time exploring the novel resonances, before running through the entire book of compositions. Modirzadeh gave minimal instructions, preferring to allow each musician to shape the music as they imagine it. As Modirzadeh said in an interview: “It takes more heart than head, with the intention of something beautiful.” He subsequently chose what he felt to be the most magical of these performances for this release.

The program unfolds with “Facet Taborn,” which was improvised by the pianist at the very end of his session after intense focus on the compositions. The otherworldly resonances are introduced, opening the door to further mysteries within. “Dawn Facet” and “Facet 27 Light” are interpretations of the same composition, first by Sorey, then by Davis. Modirzadeh’s saxophone is gentle, vulnerable, as if opening himself to all possibilities from his partners. Modirzadeh calls “Facet 28 Nora” “the cornerstone melody of all Facets.” His playing is delicate and loving, tender and haunting. “Facet 34 Defracted” is Davis’s radical mash-up of Thelonious Monk’s “Pannonica” and “Ask Me Now,” compositions that Modirzadeh separately interprets in duet with Taborn. For Davis, “It all made sense when we started playing the Monk tunes. Monk had this effect where he would try to ‘bend’ the note on the piano by adding a note below the melody subtly for a moment, and I heard that connection right away between Hafez’s tuning system and the Monk tunes he chose. It’s like living in those bends that Monk was creating, committing fully to the microtones he was trying to achieve in that effect. I believe that if he heard these versions of his compositions, he would consider re-tuning his piano for good!”

As Iyer notes: “This album signals that we are entering a crucial new phase in this journey: a collective meditation, an unlocking of forms and truths. I can hardly imagine a clearer monument, to our cataclysmic year than this set of stark, intimate, heartfelt jewels by these four singular truth-seekers.”