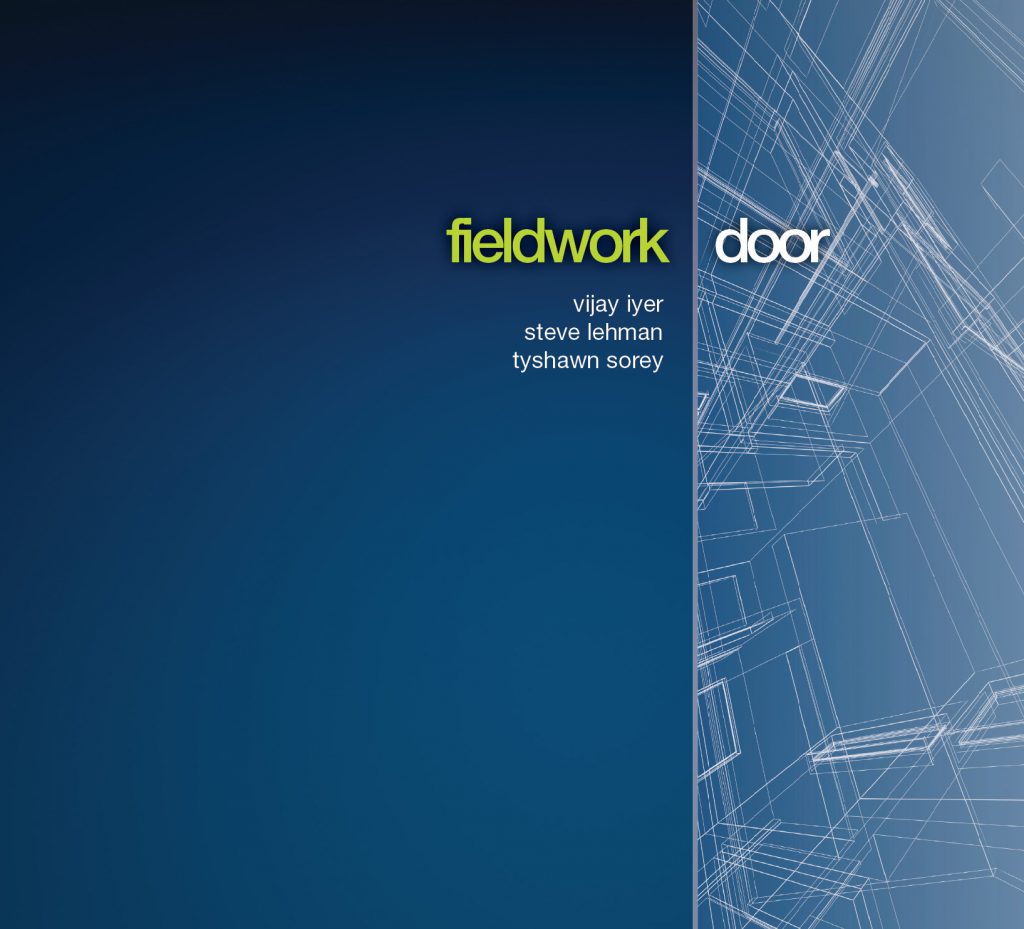 “[Fieldwork] calls up a good deal of street-energy in Sorey’s hip-hop drum grooves and…The band’s name does it justice – it’s a research work in progress, but for improv fans the virtuosity, and the contrast with the Euro version, will be fascinating.”
–John Fordham, The Guardian

“The music retains its excitement despite being dark, ominous and complicated. There is a lot of mystery and pent up emotion in between the notes that keeps the music constantly engaging and interesting.”
— Tim Niland, Charlotte Examiner

Praised by NPR’s Fresh Air as “a jazz power trio for the new century,” Fieldwork makes its most powerful and fiercely imagined statement to date with Door, their third album for Pi Recordings. An important marker in this New York collective’s ongoing evolution, “Door”documents three years of intense collaboration since Simulated Progress (Pi 16), and is the first “Fieldwork” recording to feature the jaw-dropping contributions of Tyshawn Sorey, drummer/composer/co-leader of Fieldwork since 2005. Rounded out by saxophonist/composer Steve Lehman and pianist/composer Vijay Iyer, Fieldwork reflects and refracts the American jazz tradition, modern composition, African and South Asian musics, underground hip-hop and electronica, and the influential music of Chicago’s AACM. The resulting blend is “rich in paradox: dark yet uplifting, intellectually demanding yet effortlessly funky” (JazzTimes).

All three members have growing reputations as important young bandleaders, composers, and players. Tyshawn Sorey is a new star on the New York creative music scene who has received critical acclaim for his work with Steve Coleman, Dave Douglas, and Muhal Richard Abrams, and for his expansive debut recording That/Not. Steve Lehman is an emerging heavyweight leader whose output resides on the frontiers of contemporary music, including extensive work with Anthony Braxton and Meshell Ndegeocello. Vijay Iyer is an award-winning pianist, composer, and electronic musician known for his widely respected solo projects, his ongoing collaborations with indie hip-hop poet Mike Ladd and with saxophonist Rudresh Mahanthappa, and his sideman work with Steve Coleman, Roscoe Mitchell, and Wadada Leo Smith.

The music on “Door” is born of Fieldwork’s signature rehearsal process, which perhaps most resembles that of a rock band, and which they have rigorously maintained for their entire seven-year existence. They use extensive, non-soloistic group improvisation to expand each intricate composition into something far beyond the sum of its parts: tightly unified ensemble playing, extroverted and high-impact, but with a mysterious inner logic a dense, visceral, and richly layered musical world. “Highly emotional, cutting-edge and accessible” (The Montreal Gazette)

“Door” features compositions by all three members: six by Sorey, three by Iyer and two by Lehman. But regardless of the composer, each piece is reconfigured and reworked collectively, so that the result reflects the band’s ethos It sounds like Fieldwork and no other. With the startling counterpoints that emerge among the three players – Sorey’s propulsive polyphony, in tight dialogue with Iyer’s laconic, percussive assertions, crosscut by Lehman’s tart diagonal slices the performances feel spontaneous, with surprising twists and turns, with sharp corners leading to unexpected destinations.

Whether it’s in the cyclical nature of “Pivot Point,” with its mobius strip-like structure, or the examination and re-examination of the various permutations of “Cycle,” Sorey’s writing is restrained and unorthodox.

Lehman’s contributions, “After Meaning” and “Rai” highlight his fascination with complex, stop and start rhythms and the use of microtones. “After Meaning” opens with close to two minutes of through-composed music, performed so effortlessly that the line between composition and improvisation is completely blurred.

Fieldwork continues to work to master its own approach to improvised music that of collective engagement with pre-composed materials rather than the traditional model of individual solos. This novel approach opens up endless possibilities for the artists to explore the themes of beauty and emotion, often in the most surprising and unpredictable of ways.