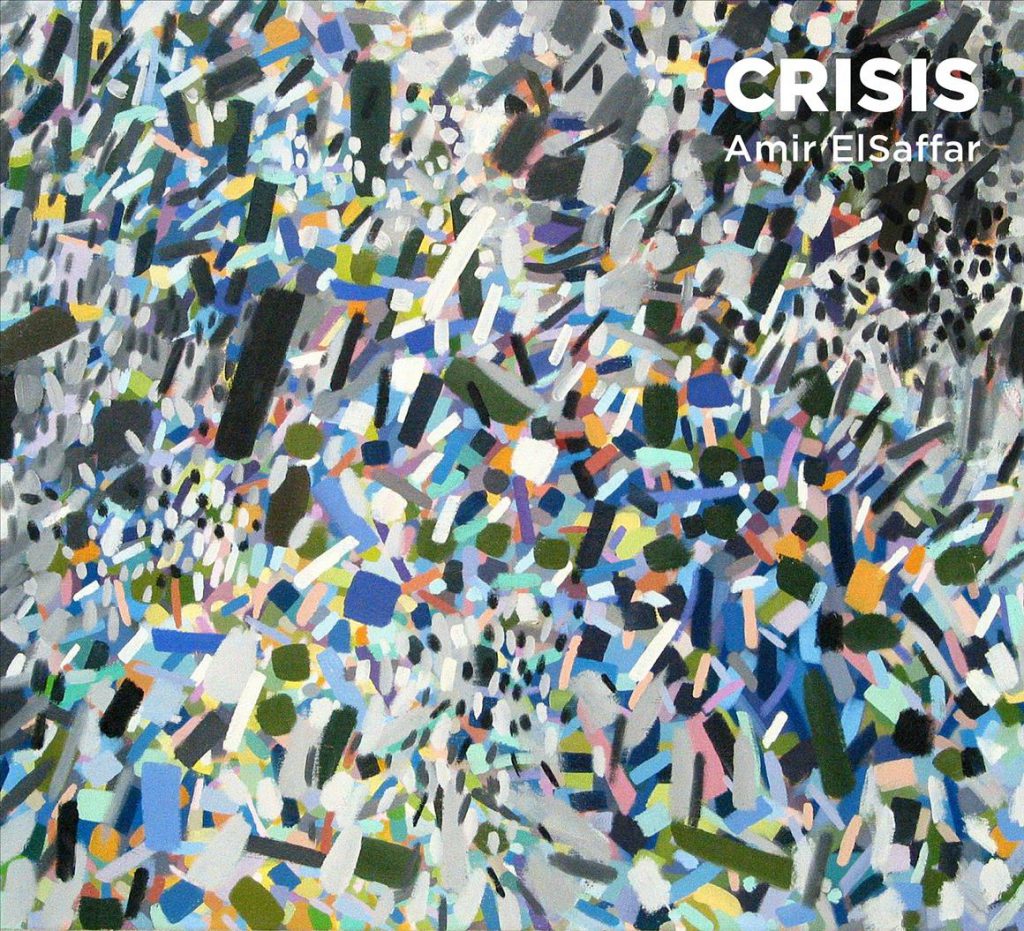 Crisis chronicles the continuing development of trumpeter Amir ElSaffar’s critically acclaimed Two Rivers Ensemble, a band purpose-built to explore the juncture between jazz and music of the Middle East, in particular the Iraqi maqam. The new work is his reflection on a region in turmoil and strife: revolution, civil war, sectarian violence; a culture’s struggle for survival. It sets aside some of the more exploratory work that he has done in recent years to focus on music that is passionate and visceral, a cry from the heart. Crisis was commissioned by the Newport Jazz Festival, where at its 2013 premiere, it made a clear emotional connection to the audience, receiving a rousing standing ovation after just the first piece. Driving and to the point, ElSaffar’s music is beyond categorization not jazz, world music or any facile fusion thereof but a world unto its own.

Born and raised just outside of Chicago, ElSaffar’s early musical education included performances with jazz and blues bands throughout the city. He also had a foray with the Civic Orchestra of Chicago, where he worked with conductors such as Pierre Boulez, Daniel Barenboim, and Mstislav Rostropovich. Today, his music finds root in the Iraqi maqam, the music of his father’s homeland. But unlike many who dabble in a musical tradition only to give their music a superficial sheen of exoticism, ElSaffar’s commitment to Iraqi and Arabic culture runs deep: He has traveled the world to study with many of the worlds great maqam masters, including Hamid AlSaadi, the worlds leading authority on Iraqi maqam, who called ElSaffar ” one of the finest santour players and maqam singers in the world. I am proud of his dedication and continued commitment to discovering the secrets to this music.” ElSaffar is the music curator for Alwan for the Arts, the New York-based Middle Eastern cultural center in addition to leading the Alwan Ensemble, which specializes in the performance of Arab classical music. He is also the director of the Middle Eastern ensemble at Columbia University.

Crisis is ElSaffars fifth release on Pi Recordings and the third, following Two Rivers (2007) and Inana (2011) to feature the Two Rivers Ensemble. The new album is comprised largely of the “Crisis Suite,” which was composed in 2013, after he spent a year living in Egypt, where he witnessed the Arab Spring protests first-hand, and Lebanon, where he worked with Syrian musicians who were living through that country’s harrowing civil war. The suite follows a narrative arc: a commentary on the recent history of Iraq and the Middle East. Often based on the melodic modes of the maqam and folkloric rhythms, the music eschews some of the abstract quality of some of ElSaffar’s prior work and focuses instead on the passionate and ecstatic. His virtuoso trumpet playing is firmly rooted in the jazz tradition, yet at the same time he’s capable of playing a taqsim (melodic improvisation) in an authentic Arab style, with a sound that is reminiscent of the nay (reed flute) along with the melisma and ornamentation of maqam singing. He has a unique approach to playing microtonally: Using a standard, three-valve trumpet, ElSaffar has created new techniques that enable intonation that are characteristic to Arabic music. His sound is rich with overtones and burred texture: in one moment, bright and pushing to the sonic edge of the instrument and at another, a hushed whisper. His idiomatic maqam vocals sound at once prayer-like and an appeal for understanding and compassion, and his santour is full of tremolos and a long echo that is evocative of an ancient past.

Helping ElSaffar bring his singular musical concept to life are Nasheet Waits on drums, who drives the ensemble with a flexible sense of time combined with deep swing; bassist Carlo DeRosa, who exhibits a mastery of quartertones and rock solid groove; the adroit playing of Tareq Abboushi on buzuq (long-necked lute) and Zafer Tawil on oud and percussion who, in addition to taking masterful solos, work together to fill the role of a chordal instrument, providing a rich, chattering bed of rhythmic counterpoint. Ole Mathisen, a master of microtonal playing on the saxophone contributes beautifully controlled and technically dazzling playing, and serves as the perfect foil to ElSaffar on the front line. After eight years together, the ensemble has developed a profound empathy and an intuitive ease with this highly complex music, enabling the band to play with a creativity that transcends its pure technical challenges.

A 2013 winner of the prestigious Doris Duke Performing Artist Award. ElSaffar continues to grow as an artist. He has worked extensively in Europe over the past two years, collaborating with diverse musicians such as the Belgian group Aka Moon, Swedish composer C.C. Hennix, and a Berlin-based microtonal brass quintet. Last year, La Fondation Royaumont in France commissioned ElSaffar for a piece for string quartet plus voice and santour, which premiered at the Festival d’Avignon, one of the world’s largest theater festivals, and Festival d’Aix, an opera festival. They have since commissioned him for three more works that will be performed at festivals throughout France over the next three years. In April, 2015 ElSaffar assembled an unprecedented ensemble of 17 musicians to realize a new work, “Rivers of Sound,” that made its premiere at Lincoln Center in New York City.

Asked to describe his intentions when writing Crisis, ElSaffar wrote: “Out of the ashes emerges a sound. Overtones, harmonizing, becoming many. Intangible threads of humanity, too delicate to be broken or destroyed, emanating from a shared, infinite past that is our present….” The resulting music is by turns tumultuous and tender, both a lament for something lost and a quest for transcendental beauty.