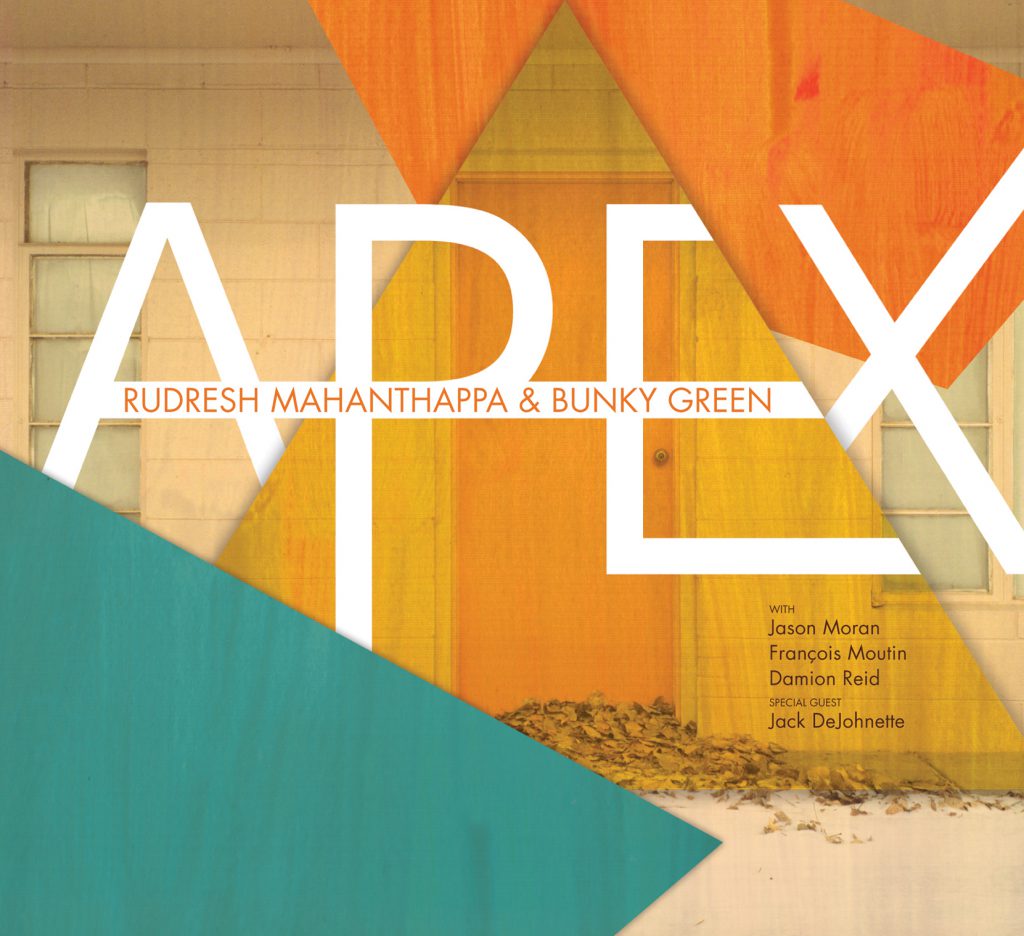 “Forming this inter-generational alto confab was a great move by both participants. Thirty-something fire-breather Mahanthappa is a dude who likes to scorch everything around him, and under-heralded vet Green has no problem turning lyricism into kinetics. They’ve definitely caught the spirit on the new Apex, a record that storms in several different ways while wafting strains of South Indian music into the mix. Best of all: the leaders give their rhythm section enough elbow room to be equal partners. Don’t be shocked to see this team do a land-grab on more than a few best of 2010 lists.”
Jim Macnie, Village Voice

“Witness Mahanthappa’s ‘Soft’, which becomes anything but. Despite the sinuous, seductive theme, the interpretation is volcanic, from Moutin’s aggressive introductory solo to Reid’s crackling bursts and both euphorically building sax solos. Writing credits are split evenly between the two leaders, with Mahanthappa employing his trademark blend of rhythmic complexity and South Indian harmonic inspirations. Green’s tunes are, perhaps necessarily, closer to the jazz mainstream: ‘Rainer and Theresia’ is a melancholy waltz with a noir tinge, while ‘Lamenting’ is an aching ballad dominated by a starkly romantic Moran solo. ‘Little Girl Ill Miss You’, on which Mahanthappa is absent, contains the disc’s most singable melody, a standard that never was.”
– Shaun Brady, JazzTimes

“Born 36 years apart, the saxophonists Mr. Mahanthappa and the elder Mr. Green, an educator as well as a player, come from different corners of improvised jazz. They found their way to each other circuitously, and it seems as if they were meant to put a band together, sharing their rapid, searching, wide-interval saxophone language.”
– Ben Ratliff, The New York Times Fall Arts Preview

Apex is a blazing collaboration between alto saxophonists Rudresh Mahanthappa and Bunky Green that puts on display a fifty-year continuum of state-of-the-art saxophone playing. Featuring the all-star band of Jason Moran on piano, François Moutin on bass and switching off on drums, the dynamic Damion Reid and the legendary Jack DeJohnette, Apex shines a much-deserved spotlight on Bunky Green, a hugely influential but under-recognized original in jazz.

As Mahanthappa tells it, “I first heard about Bunky from the late great saxophone teacher Joe Viola when I was a student at Berklee in the early 90s. Joe heard me warming up once and recommended that I check Bunky out as he thought that my approach was on track to being something similar to his. He loaned me Bunky’s record Places We’ve Never Been (Vanguard) which totally knocked me out!” Mahanthappa sought Green out and sent him a tape of his playing to which Green responded by providing some encouraging feedback, leading to a long friendship. Still, the two never got a chance to play together until 2008 during a jam session at the Jazz Baltica Festival. Inspired by that performance, Mahanthappa featured Green in his appearance at the 2009 Made In Chicago Festival. Soon thereafter, Rudresh made plans to record with Bunky, enlisting his regular bassist François Moutin and the dynamic young drummer Damion Reid. Jason Moran, who had played on Green’s CD Another Place (Label Bleu), also quickly signed on. The lineup was set when Mahanthappa told Jack DeJohnette in whose band Rudresh plays about the recording. DeJohnette, who had been a huge fan of Bunky’s from back when he was a young drummer coming up in Chicago, also clamored to play on the session.

One can immediately see why Mahanthappa was drawn to Green’s playing: The two share a similar biting tone, harmonic sophistication, a well-articulated rapid fire attack, and a certain rhythmic elasticity. Perhaps whats most amazing about Green is that such modern playing is coming from a 75 year old. The album features originals by both Mahanthappa and Green specifically created for this collaboration. The compositions highlight a collective vision of using traditional forms as a launching point for contemporary improvisation and interaction at its highest level.

On Apex, Bunky Green and Rudresh Mahanthappa look back over the last fifty years of jazz saxophone playing and together chart its course into the future.