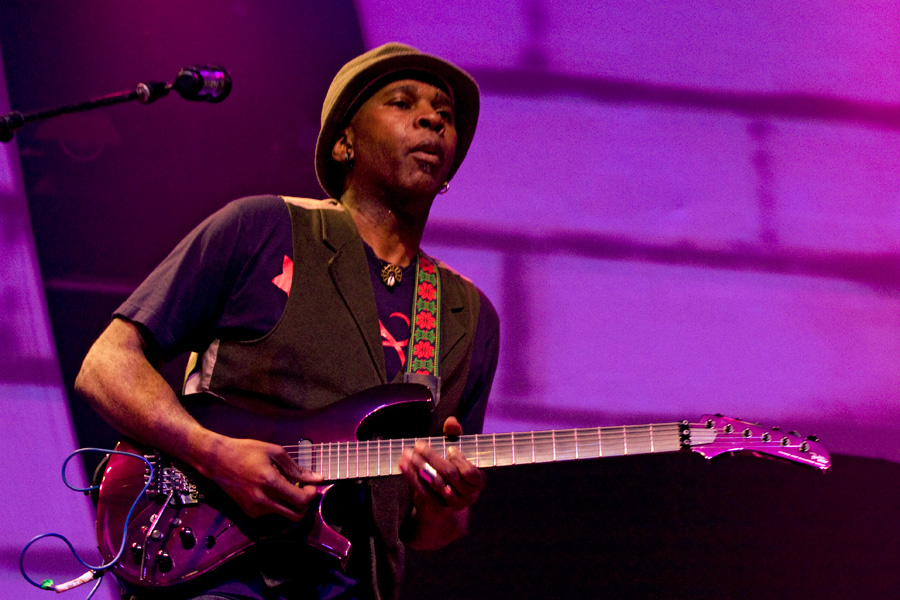 Webster’s Dictionary defines an artist as “one who professes and practices an imaginative art; a person skilled in one of the fine arts; a skilled performer.” By any of these definitions, guitarist and composer Vernon Reid is a true artist, one whose art is a work forever in progress, from his formative years on the downtown New York jazz/funk/punk scene with Ronald Shannon Jackson’s Decoding Society, to his leadership of the pioneering multi-platinum rock band Living Colour, to his collaborations with creative spirits ranging from guitarist Carlos Santana and African singer Salif Keita to choreographers Bill T. Jones and Donald Byrd.

Vernon Reid is probably best known for leading Living Colour. Vernon founded Living Colour in New York City circa 1985 and piloted the band through a remarkable career. Among the highlights: a double platinum-selling debut album Vivid, released in 1988; its gold-certified successor, Time’s Up, released 1990; two consecutive Grammy Awards in the category of Best Hard Rock Performance; opening for the Rolling Stones’ 1989 “Steel Wheels” tour; and appearing on the first Lollapalooza tour in the summer of 1991. Vernon is thrilled to be working with Living Colour again and is extremely proud of their new album Collidescope, which was released in October of 2003 on Sanctuary Records.

In addition to Living Colour, Vernon has been engaged his usual panoply of activities. He released “Mistaken Identity”, his first solo album in 1996 and has collaborated with the choreographers Bill T. Jones on “Still/Here” and Donald Byrd on “Jazztrain”. He performed “Party ‘Til The End of Time” at the Brooklyn Academy of Music (BAM) with The Roots, an end of the millennium tribute featuring the music of Prince’s album “1999”. He also composed and performed “Bring Your Beats” a children’s program for BAM. Vernon has also produced records by Resort (a Mexican hard rock group) and two Grammy nominated albums: “Papa” by the great African singer Salif Keita and “Memphis Blood: The Sun Studio Sessions” by James “Blood” Ulmer. Blood’s most recent album, released in September of 2003, “No Escape From the Blues”, was also produced by Vernon Reid. He also appears on “Guitar Oblique” (Knitting Factory Records) with guitarists David Torn and Elliot Sharp. Vernon was also featured in the program presented by BAM and the Experience Music Project in Seattle entitled “Magic Science”, which includes Medesky, Martin & Wood and the Gil Evans Orchestra performing Gil Evans’ arrangements of songs by Jimi Hendrix.

Vernon composed the score for the film “Paid In Full”, directed by Charles Stone III (well known for creating the “Wasssup!” series of commercials for Budweiser as well as directing three videos for Living Colour) and released by Miramax in the fall of 2002. Vernon also composed the score for the celebrated documentary “Ghosts of Attica” which aired on Court TV in the fall of 2001 and has been featured at several film festivals.

Vernon along with DJ Logic, calling themselves “The Yohimbe Brothers”, released an album in September, 2002, “Front End Lifter”, The Yohimbe Bros. been touring on and off since the release of the album. Vernon is also the music supervisor for the film “Mr. 3000” starring Bernie Mac and directed by Charles Stone III; “Mr. 3000” is scheduled for release in the fall of 2004. Vernon’s album with Masque (Leon Gruenbaum – keyboards, Hank Schroy – bass and Marlon Browden – drums), an instrumental album entitled “Known Unknown”, was released in April 2004 on Favored Nations records.

The Grammy Award winning guitarist and his band Masque present a collection of 13 new songs. “Other True Self” is a sonic kaleidoscope, a tumble of colors and a whirl of astonishing visions that expose a vivid personal landscape and illuminates one or another side of Vernon Reid, was released on April 18, 2006.

The birth of the free form funky freqs intertwined with the untimely death of Tonic, the legendary underground center for jazz, rock performance and experimental music in lower Manhattan. In its waning days a number of performances were commissioned from artists associated with the venue. Enter Weston, whose called two long time friends to share the stage. Due to traveling and production circumstances, the trio had not played a single note together. The success of this spontaneous performance at Tonic came as a surprise and revelation to the members of the trio. What started as an impromptu gig, now begged further consideration. Shortly thereafter, Weston invited Reid and Tacuma to come to the rhythm section’s native Philadelphia, playing the underground haven, Tritone. Once again with no prior planning, the three took the stage and had yet another remarkable evening.

Willing to take a risk, Reid booked time at a little known but professionally appointed studio near his home in Staten Island.

These three musical innovators went into the studio wanting to explore the organic energy and excitement they felt from the live performances. What you hear on this recording is their third performance. Electrified by Reid’s thought and riff provoking guitar playing, matched with Tacuma’s inventive bass work and locked down by Weston’s deep in the groove kit work, “Urban Mythology Vol. One” is a chapter in its own book.