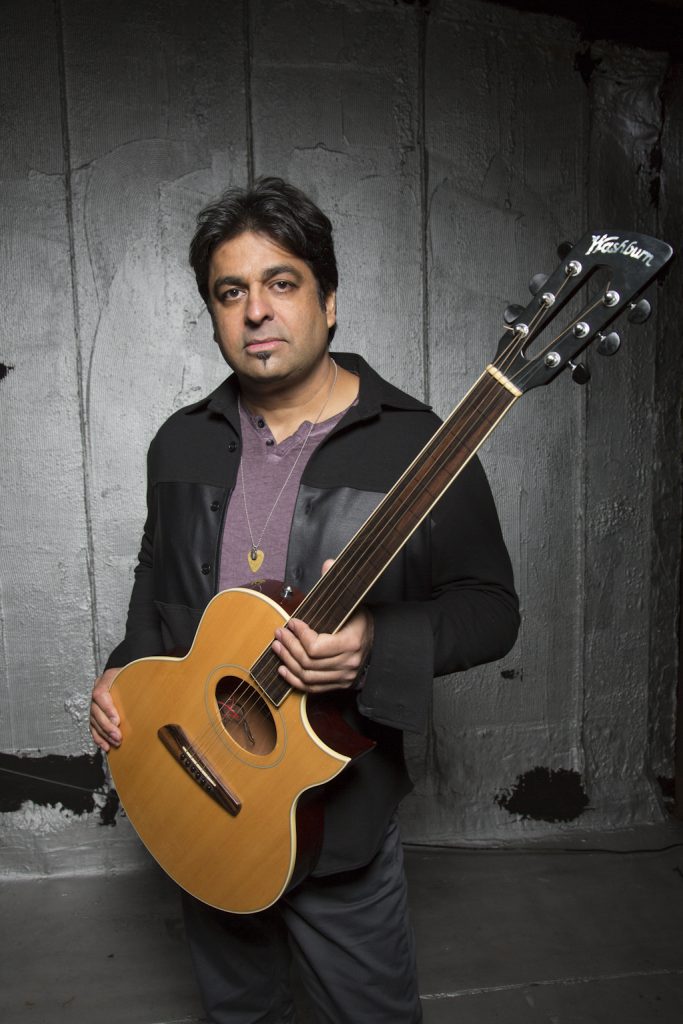 Born in Karachi, Pakistan, removed at the age of four to the vastness of Southern California, schooled at the University of Southern California and the Manhattan School of Music in jazz and classical music, along with a pilgrimage in India under the tutelage of master percussionist, Ustad Alla Rakha, Rez Abbasi is a vivid synthesis of all the above stated influences and genres. Making New York home for the past 25 years, Abbasi has developed a unique sound both as a composer and an instrumentalist and is considered by many to be one of the foremost modern jazz guitar players the world over. He has honed his skills with performances throughout Europe, Canada, the U.S., Mexico and India. He has performed and recorded with many jazz greats including, Grammy winner Ruth Brown, Peter Erskine, Kenny Werner, Barre Phillips, Tim Berne, Michael Formanek, Billy Hart, Marvin ‘Smitty’ Smith, Gary Thomas, Dave Douglas, Rudresh Mahanthappa, Mike Clark, Tony Malaby, George Brooks, Ronu Majumdar, Kadri Gopalnath, Vishwa Mohan Bhatt, Marilyn Crispell, Greg Osby, Howard Levy and a host of others.

Rez is musical director, arranger and producer for Indian/Canadian multiple Juno award winning vocal sensation, Kiran Ahluwalia. Kiran’s 2008 recording, Wanderlust was in the top ten European world-music radio charts and also was among the top-ten albums of 2008 in Song-Lines Magazine. Another of Abbasi’s highly regarded associations is with heralded saxophonist, Rudresh Mahanthappa. Rez plays an integral role in Mahanthappa’s Indo-Pak Coalition and Kinsmen Ensemble. Rez can also be heard as a member of many others projects.

With twelve albums of mostly original compositions under his belt, Abbasi continues to find new groups of musicians to help his musical vision come to life. His 2005 recording Snake Charmer, created a stir in the music world partly due to his organic, original approach in blending two complex musical genres together, namely jazz and Indian music. The provocative instrumentation of organ, drums and guitar alongside Indian vocalist Ahluwalia, is on one hand, a sound grounded in jazz and yet uncommon in jazz arenas. 20th Century Guitar reviewed the CD as, “One of the best examples yet of how to merge Indian Classical music with jazz…Snake Charmer really breaks new ground.” In 2007, Rez achieved even greater heights with the follow up to Snake Charmer, Bazaar. Bazaar continues the group’s journey through territories unheard in today’s jazz/world music scene.

Abbasi’s sixth album, Things To Come (Sunnyside, 2009) is yet another leap into unchartered musical territory. It features a star studded group of Vijay Iyer, Rudresh Mahanthappa, Kiran Ahluwalia, Johannes Weidenmueller and Dan Weiss and was included in DownBeat’s top CD’s of the decade. The same year he was awarded the prestigious Chamber Music America Grant as a commission to compose new works for the same ensemble, Invocation. At the end of 2009, Abbasi formed a new quartet. The Rez Abbasi Acoustic Quartet, or RAAQ, was conceived for the purposes of featuring Abbasi’s acoustic guitar talents. Simultaneously, it serves as an outlet to feature his compositions alongside “gems from other composers that are rarely heard today.” Abbasi was well aware of creating a group that would magnify and enhance his acoustic guitar sound – calling upon vibraphonist, Bill Ware (Steely Dan), bassist, Stephan Crump (Vijay Iyer Trio) and drummer, Eric McPherson (Andrew Hill). RAAQ’s debut, Natural Selection (Sunnyside, 2010) captures the profound sensitivity of the ensemble as it twists and turns through the set, featuring the standout textural cascades created between acoustic guitar and vibraphone. The album was included in JazzTimes’ and NPR’s ‘best of’ the year lists and the New York Times did a feature review of the CD release concert. RAAQ performed at the 2010 Newport Jazz Festival which was recorded and broadcasted several times on NPR’s JazzSet with Dee Dee Bridgewater.

In 2010, Abbasi reconvened his group, Invocation to record the follow-up to Things To Come. Suno Suno (enja, 2011) features his new CMA commissioned compositions that are informed by Qawwali – spiritual music from Pakistan. The power, joy and depth that Qawwali encompasses can be heard throughout Suno Suno. The album was included on multiple top-ten lists of 2011. As a response to Invocation, with its extended ensemble and highly complex compositions, Abbasi felt the need to do a more intimate project. His new trio was formed and it includes long time cohorts, bassist, John Hebért (Andrew Hill) and drummer, Satoshi Takeishi (Eliane Elias). Continuous Beat (enja, 2013), is his first trio outing and the results are brimming with adventure and subtlety. Along with his cutting edge compositions, the trio reinterprets music of Monk, Jarrett and others, using guitar electronic manipulation. As he states, “I wanted to excite the listener with a new guitar trio experience. One that retains the warmth of the established trio sound but also employs electronics in order to expand the timbral palette, especially for the melodies. Ultimately, this approach not only gives clarity to the solos but also keeps the listener’s aural sense stimulated.”

Abbasi soon re-employed his acoustic quartet, RAAQ for another album. Intents & Purposes (enja, 2015) acoustically recasts classic jazz-rock music from the ‘70s, a genre Rez initially was not a fan of due to its over use of synthesizers. He used a fretless guitar to highlight his love for micro-tonality. Rez was featured in the Wall Street Journal, DownBeat and JazzTimes.

In the summer of 2016 Abbasi released an album with his new group, Junction. Behind the Vibration(Cuneiform), is the inverse of Intents & Purposes in that it is a full-blown electric album of all originals. With Mark Shim on tenor sax & midi wind-controller, Ben Stivers on keyboards, B3 & Rhodes, Kenny Growhowski on drums and Rez employing overdrive and effects, the music moves in very unpredictable ways.