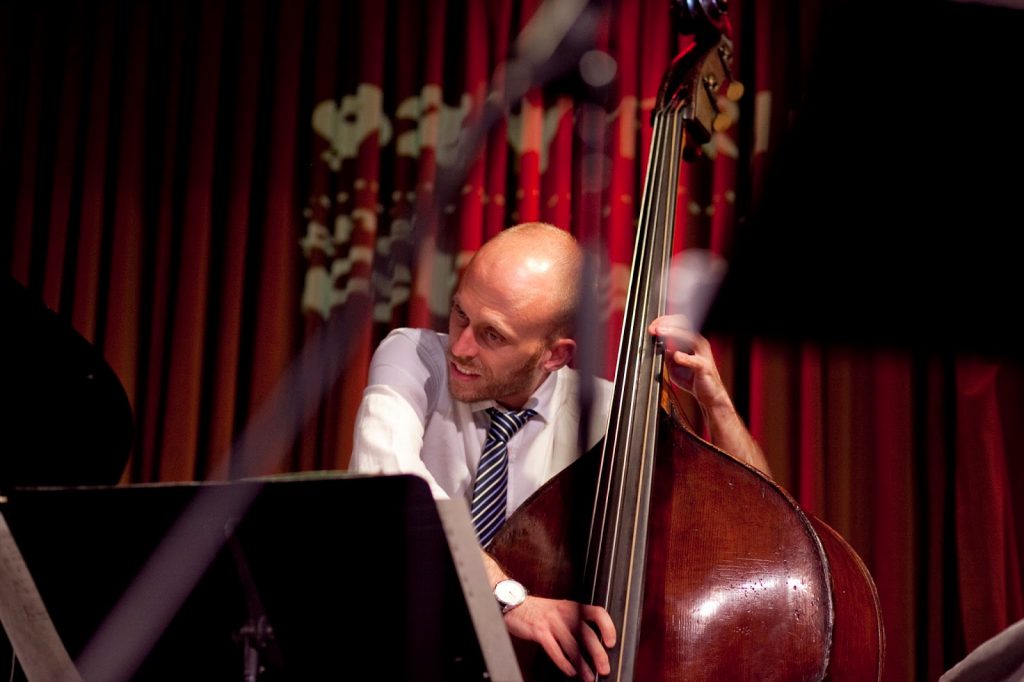 Matt Brewer was born April 20, 1983, in Oklahoma City but spent most of his youth in Albuquerque, New Mexico. Born into a musical family, Matt was surrounded by music from an early age, both his father and grandfather being jazz musicians, and his mother an avid music lover and radio DJ (who, before Matt was born, would play classic jazz albums for him). He started playing drums at age 3, learning rudiments on a small practice pad, but didn’t take music seriously until the age of ten, when he found the bass during a summer program at the Interlochen Center for the Arts. There he began studying classical bass from two world renowned bass instructors, Winston Budrow and Lawrence Hurst, while learning about jazz from his father. Matt started gigging professionally at the age of twelve around the Albuquerque area and was soon winning awards from the top university jazz festivals, twice winning the festival’s highest award which had never before been given to a middle school student. He continued his study of classical bass with the superb principal bassist of the New Mexico Symphony, Jean-Luc Matton, but soon realized that it would be necessary to be in an overall more creative and art appreciating environment. This led to the decision to attend high school at the Interlochen Arts Academy. Matt continued his study of classical bass, and took jazz performance classes. During his junior and senior years, Matt was selected from applicants across the country, to participate in the Grammy Band. He then performed on the 2000 Grammy Awards telecast in a group that was the first ever to perform on the show without being nominated for a Grammy. After graduating the Interlochen Arts Academy, Matt attended the inaugural class of The Juilliard Jazz Program and studied with bassists Rodney Whitaker and Ben Wolfe. After spending two years at Juilliard he decided to leave school to make time for his busy touring schedule. Since then he has worked with artists such as Greg Osby, Gonzalo Rubalcaba, Lee Konitz, David Sanchez, Terence Blanchard, Aaron Parks, Jeff “Tain” Watts, and many others. He is features on dozens of recordings, including two on the Blue Note record label. Channel Three by Greg Osby, and Avatar by Gonzalo Rubalcaba. Matt has also led bands in New York, performing at venues such as the Jazz Gallery, Fat Cat, and the Tribeca Performing Arts Center. His band was also featured at the New Mexico international Jazz Festival. He is an adjunct faculty member at The New School, has been a guest artist/teacher at the Banff Center, and has taught lessons and masterclasses across the globe.