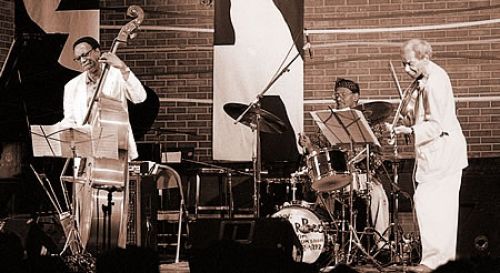 When the Revolutionary Ensemble formed in the early 70s, the New Thing in jazz, disbursed mainly through the ESP label, had flamed brightly, been co-opted by political influences and developed into a more violent strain of free improvisation, a move from which it has yet to recover. What was happening concurrently was a total acceptance of any instrument into the jazz fold. Beneficiary of this benevolence was Leroy Jenkins, heir to the heritage of Stuff Smith but also the first to apply the dulcet tones of violin to a more experimental setting (at least in jazz).
After work with Archie Shepp and Alan Silva, and as a member of the woefully short-lived Creative Construction Company, Jenkins hooked up with bassist Sirone (born Norris Jones, who had been with Pharoah Sanders, Marion Brown, Gato Barbieri and others) and younger drummer Jerome Cooper (fresh from Rahsaan Roland Kirks group). They formed the Revolutionary Ensemble and began working on chamber jazz. The Revolutionary Ensemble was first recorded in 1972. And Now… (Pi) is the ensembles first recording since the 1970s.