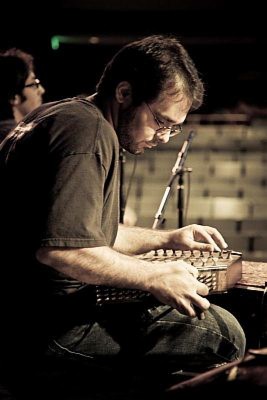 Faraz Minooei Was born in Tehran and began playing santur at the young age of nine. While studying with Behnam Mehrabi, he discovered a deep spiritual desire to study music, seeing music as an “unexplainable souvenir from the eternal truth”. Faraz received his B.A. from San Francisco State University in 2008 as a Nagle Scholar and the first World/Jazz music major with santur as his primary instrument! As a full-time musician, Faraz is a performer, composer, ethno-musicologist and teacher. He views studying music as a never-ending mission. In view of that, he has also had the good fortune to study with masters such as M. R. Lotfi, H. Omoumi, Royal Hartigan, Hafez Modirzadeh, Michael Dessen, Kojiro Umezaki and Christopher Dobrian.

Since 2006, he has lectured and performed at many universities including SFSU, UCI, UCLA, UCSC Stanford University and at the Society of Ethnomusicology. He has performed with noted ensembles in the United Sates, among which was his collaboration in 2009 with Yo Yo Ma and Kayhan Kalhor in the Silk Road Ensemble (for the 50th anniversary of the Lincoln Center) and the collaboration as a composer and santur player with the film director Bahram Beyzaie for the play “Jana & Baladour”.

Recipient of numerous scholarships and grants, he earned his Masters of Fine Arts degree in music with emphasis in Integrated Composition, Improvisation, and Technology from the University of California in Irvine. His thesis, “Abstracting” Iranian Classical Music, challenges the traditional practice of Iranian Classical Music to introduce innovative and transformative functions of the music in contemporary society.