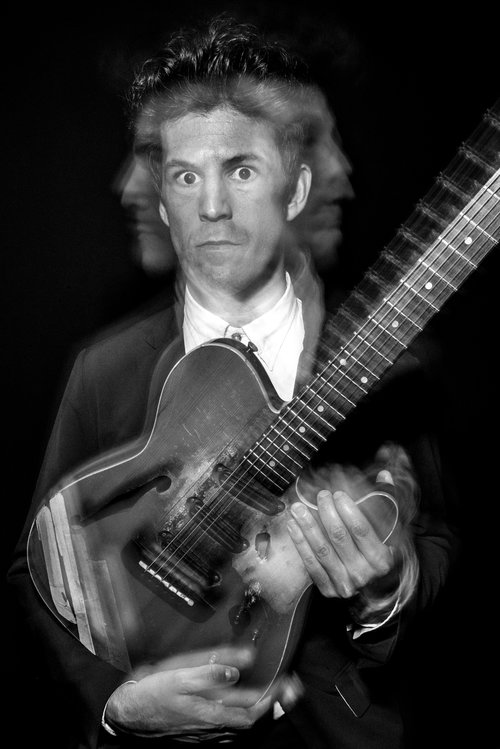 Brandon Seabrook is a guitarist, banjoist, and composer living in New York City where he has established himself as one of the most forward-thinking and versatile and guitarists of his generation. He has also made a name for himself as an influential banjo innovator, described by the New York Times as “a man apparently hellbent on earning the title of World’s Least Rustic Banjo Player.” His work focuses on the juxtaposition of  hallucinatory soundscapes, angular composition, and a massive dynamic range that can change in a nanosecond. He has released seven albums as a leader covering everything from pulverizing art-metal to chamber music bridging the realms of extreme rock and the classical avant-garde. Rolling Stone Magazine noted, “The fiercely dexterous musician has lunched a number of bands combining serious chops with manic intensity and a left- field compositional vision.”

Seabrook honed his guitar skills at the New England Conservatory in Boston. He has since performed extensively in North and South America, Mexico and Europe, as a solo artist, bandleader, and collaborator. He has been called upon by titans such as Anthony Braxton, Nels Cline, Cecile McLorin Salvant, So Percussion, and Joey Arias for his idiosyncratic physical performance style , hyperreal technique and impeccable articulation . He has been profiled in the New York Times, The Wall Street Journal, Premiere Guitar, Downbeat Magazine, Rolling Stone, NPR, The Chicago Reader, and The Wire.

Seabrook Power Plant, the nuclear trio donned “a manic clusterfuck of merciless banjo torture” by the Village Voice, is Brandon’s brainchild, blending the brutal energy of punk-rock with the intricate execution of through-composed avant jazz. The band has released two albums to much critical acclaim. Time Out New York praised the band’s eponymous debut as “not only one of the most baffling experimental releases of the year it’s also one of the best.”