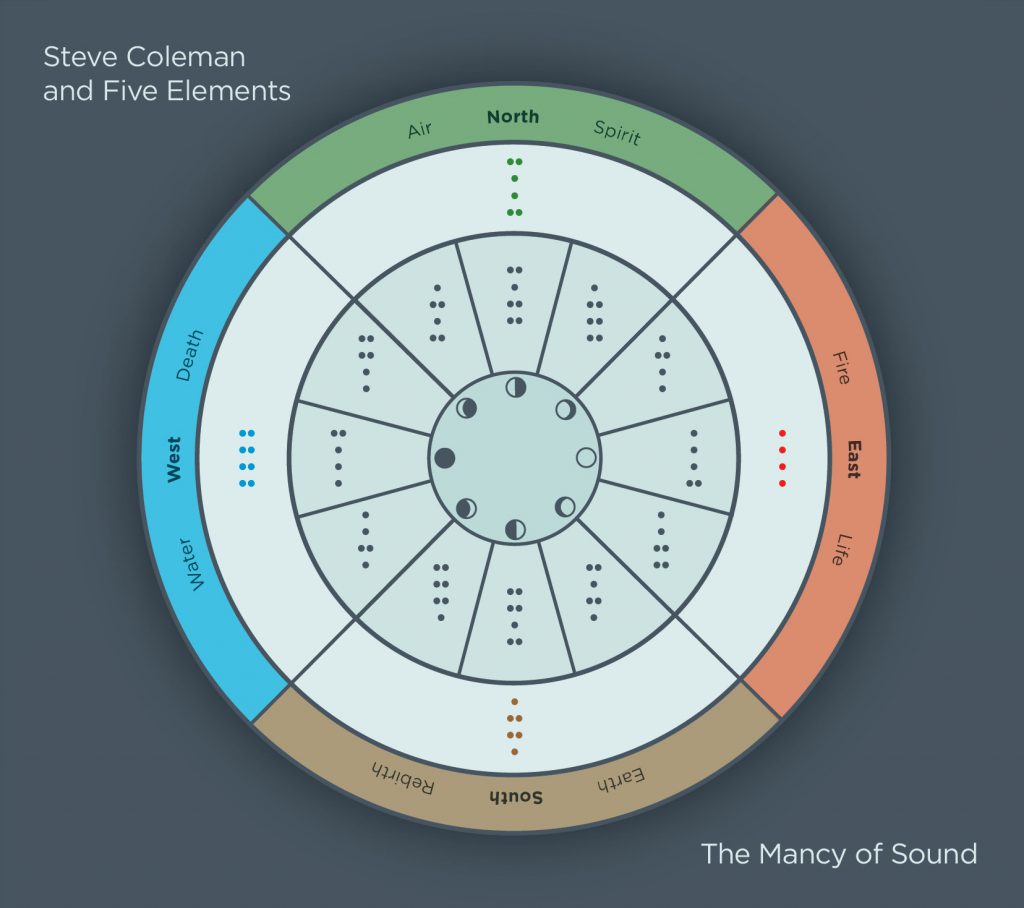 “These forms are astutely integrated, confirming that Steve Coleman’s ultimate value to modern creative music lies as much in the considerable breadth as well as depth of the historical sources that he constantly channels.”–BBC Music

“Whats most impressive about Coleman is that he pursues musics most esoteric complexities without sacrificing its outward allure. Its as intriguing on the surface as in its depths.”–Washington City Paper

“A vivacious group effort brimming with intricate cross-hatched melodies, oblique harmonies and kaleidoscopic rhythms, The Mancy of Sound follows Harvesting Semblances and Affinities as the strongest albums of Coleman’s career, reinforcing his significance in the development of contemporary jazz.”–Point of Departure

“Of all the musicians who followed Coltrane, Ornette and the AACM, Coleman has done the most work and sustained the highest level of innovation and creativity of output and impact.”–Downbeat

“More than just a conceptualist, Coleman is also a fierce performer who delivers darting runs that are equally fluid, and incisive. There are points throughout the album where the array of instruments comes together in harmonious cacophony, like the alignment of planets.”–All About Jazz

“The Mancy of Sound is an immensely satisfying marriage of organization and what sounds like freedom; a strange, alluring amalgam of West African, Cuban and Brazilian music combined with the improvisatory nature of jazz.”–Jazz Times

“Coleman has constructed his own language from the rhythms of Africa, Cuba, and India. He’s also a great alto player, with one of the most beautiful, effulgent tones in jazz.”–The Boston Phoenix

The Mancy of Sound is the follow-up release from influential alto saxophonist and composer Steve Coleman to last year’s critically acclaimed Harvesting Semblances and Affinities. That album was a statement of purpose that announced the return of Coleman to popular consciousness. The CD was named by Ben Ratliff in the New York Times as his “#1 album of 2010” and was also voted among the top ten releases of 2010 in both the Jazz Times and Village Voice Critics Polls. His performance was thought by many to be the highlight among the almost forty bands that performed at the June 2010 Undead Festival in New York.

Of course Coleman has never really been away. Despite not having a well-distributed release in the United States for nine years, he has maintained an active schedule performing internationally. Just as important, his influence on successive generations of jazz musicians continues to grow. Interviewed in The Wall Street Journal, pianist and composer Vijay Iyer said: “It’s hard to overstate Steve’s influence. He’s affected more than one generation, as much as anyone since John Coltrane. You’ll find Coleman’s mark all over the advances that jazz has made rhythmically since he helped spearhead the M-Base movement some 25 years ago.”

The Mancy of Sound finds Coleman at his creative peak, incorporating a lifetime of research into cycles found in nature and astronomy into his musical methods. The word “mancy” is taken by Coleman to be a form of divination: a process of discovering forms and pattern through visualization and study. He had been working on a version of this approach for some time, but was able to further develop this concept during his month-long curatorial residency in 2007 at The Stone, the New York performance space. The music on this release as well as on Harvesting is the direct result of those explorations.

The centerpiece of the album is the “Ifá Suite”, which is made up of the compositions Ogbe, Idi, Iwori and Oyeku, representing Fire, Earth, Air and Water, which are symbolized by the colors red, brown, green and blue, respectively. Ifá refers to a divination and philosophical system of the Yoruba-speaking people of West Africa, which can also be found in the African diasporic cultures of Brazil, Cuba, and Haiti. The dot patterns on the cover of this CD are a traditional Yoruba symbolic codification of the sixteen Od If. Coleman utilized these patterns, as well as the character of the elements, the directions, and the colors as the foundation of the rhythmic, melodic and harmonic form underlying the four compositions of this suite. For example, the overall rhythmic form of each composition is a direct transcription of the dot patterns and the order in which they occur counter-clockwise in the diagram; and the musical colors of the melodic modes is a reflection of the character of the elements. The “Ifá Suite” was originally composed for vocalist Cassandra Wilson who first provided Coleman with the idea of composing music inspired by the Odú Ifá.

“Jan 18” and “Noctiluca (Jan 11)” are based on the eight lunar phases as viewed from a specific place at particular moments. Coleman took the intermediary step of corresponding the eight lunar phases with the eight trigrams of the I-Ching, which symbolized the lunar phases in a form that could be explored musically. This approach is explained in great detail in his article, “The Lunation Cycle as a Point of Departure for Musical Ideas” in the book Arcana II (HipsRoad / Tzadik Publishing, 2007).

The two treatments of Formation are taken from a movement in a Coleman composition for saxophone and orchestra originally commissioned and performed by the American Composers Orchestra. They masterfully demonstrate Colemans use of counterpoint in his writing for horns and voice.

This edition of his longtime band, Five Elements, is perhaps his strongest ever. Of particular note are Jonathan Finlayson, who has been with the group for the last eight years and is one of the most highly regarded young trumpeters in jazz, playing on such critically acclaimed albums as Steve Lehman’s Travail, Transformation, and Flow and Mary Halvorson’s Saturn Sings; and Jen Shyu, whose vocals with its precise and beautifully nuanced articulation and rhythmic precision Coleman employs as an equal part in the horn section. Completely defying the traditional role of jazz singing, Shyu’s passionate vocals bring an emotional element to this complex and cutting-edge music while pushing the possibilities of jazz singing into new territory. She will be featured on Pi Recordings next release, Synastry, a duo with bassist Mark Dresser. They are backed by two drummers, a configuration unusual in jazz: Tyshawn Sorey and Marcus Gilmore, both considered the state-of-the-art. For Coleman the idea was to achieve with trap drummers in the jazz tradition what he has previously only experienced playing with the Cuban folkloric drumming troupe AfroCuba de Matanzas; something that he describes as a multi-directional rhythmic sound, where propulsion is generated in several directions at once, with each drummers individual parts interlocked in overlapping rhythmic cycles while providing one cohesive sound. The band is joined by Ramón Garcia Pérez on percussion whose chants in Lucumi, a Cuban variant of the Yoruba language, are related to the Orishas that each song in the “Ifá Suite” is dedicated to.

Vijay Iyer also said about Coleman: “What sits behind his influence is this global perspective on music and life. He has a point of view of what he does and why he does it. He deserves to be placed in the pantheon of pioneering artists.” The Mancy of Sound reveals in Coleman an uncompromising artist devoted to the continued expansion of jazz’s breadth of view.