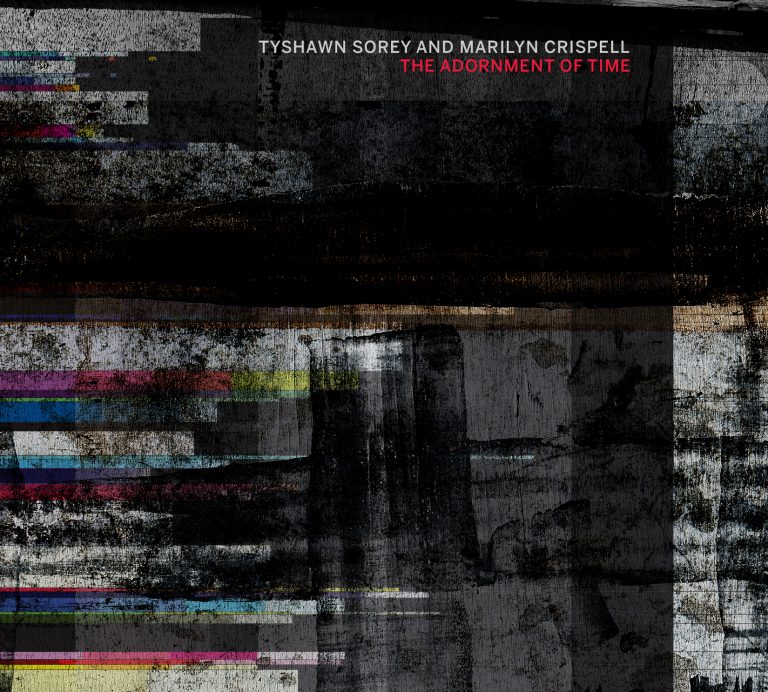 The Adornment of Time is a remarkable meeting between drummer Tyshawn Sorey and pianist Marilyn Crispell, two titans of contemporary music. Recorded live at The Kitchen in New York City, the performance is the apotheosis of fully-improvised music, a dialogue between two artists who are masters at bringing compositional form to their improvisations. Sorey has been hailed by The New York Times as “one of the most masterful player-composers of this era, in any idiom,” and The New Yorker declares that his work “eludes the pinging radar of genre and style. Even as his music shifts shape, it retains an obdurate purity of voice.” Crispell, whose playing has been described by The New York Times like “monitoring an active volcano,” is perhaps best known for her association with Anthony Braxton in his classic quartet of the 1980s and 1990s, but also for her many projects as a leader and highly-regarded releases on the ECM label. Comprised of a single, uninterrupted movement, the performance is by turns placid and tumultuous; quietly contemplative until exploding in intensity. Their performance together is an act of collaborative spontaneous composition of the highest order.

It’s been a whirlwind couple of years since Sorey’s last Pi release, Verisimilitude: He was named a MacArthur Fellow in 2017 and a United States Artist Fellow in 2018, when he also joined Vijay Iyer as Co-director of the Banff International Workshop in Jazz and Creative Music. His musical output has continued to advance in a myriad of directions. His composition “Perle Noire: Meditations for Joséphine,” with text by Claudia Rankine, was  performed by soprano Julia Bullock and International Contemporary Ensemble (ICE) on the grand staircase of the Metropolitan Museum of Art’s Great Hall. The New York Times called the performance “darkly captivating” and “haunting…. Sorey created luscious, finely crafted songs that held echoes of Messiaen or Poulenc and made the most of Ms. Bullock’s richly textured voice.” The work will be mounted in a major production at the Théatre du Châtelet in Paris in 2020. His song cycle, commissioned by tenor Lawrence Brownlee, “Cycles of My Being,” about being a black man in the age of Black Lives Matter, with text by poet Terrance Hayes, premiered at Opera Philadelphia, with subsequent performances at Carnegie Hall, and in San Francisco, Boston, Chicago, Washington DC, and Portand OR, all to rave reviews. Forthcoming commissions include new works for Alarm Will Sound, the McGill McHale Trio, Jack Quartet, a new song cycle for bass-baritone Davóne Tines, and a composition to help celebrate the 50thanniversary of the Rothko Chapel in Houston in 2021. Sorey also released the colossal Pillars, a three CD, almost four-hour work for electro-acoustic octet, and continued to perform widely with his trio featuring pianist Cory Smythe and bassist Chris Tordini. He also performed in two major concerts showing off his career accomplishments to date: One as part of the Composer Portraits series at Columbia University’s Miller Theater, where he, ICE and the Jack Quartet performed six of his compositions, and the second as part of a three-night stand at The Kitchen in New York City, which led off with the concert captured on this release.

Pianist Marilyn Crispell who, at age 72, has been performing for over 40-years and has appeared on hundreds of recordings, including some five-dozen as a leader or co-leader. In addition to her work with Braxton, she was member of numerous Reggie Workman ensembles, and has performed with a who’s who of American and European improvisers. Saxophonist Joe Lovano, with whom she appears recently on his ECM debut release Trio Tapestry, said of Crispell in a recent Jazz Times interview: “Marilyn is a pure improviser. She listens and follows the sound. She’s not playing any kind of style at all; every tone, every interval, every rhythmic nuance, she reacts to it. She has a beautiful sense of music and plays with a real concept about who she is and how she can play within whatever setting. It’s intimate, and each time through is a new exploration of the same piece.”

Sorey and Crispell first met at a festival in Ulrichsberg, Austria in 2005. Crispell recalls that she was “immediately struck, not just by [Sorey’s] playing, but also by the kind of person he was.” Sorey was familiar with Crispell’s work mostly from the classic Braxton quartet recordings, and similarly knew right away that he wanted to work with her at some point. Their paths didn’t meet again until 2014, when Sorey taught a master class at Creative Music Studio in Woodstock, NY, where the two finally were able to play together, followed by a performance at The Stone in New York City later that same year. When it came time for Sorey to decide on what to present as part of his offering at The Kitchen, he immediately decided that Crispell had to be a part of it: “What I admire most about Marilyn is her mindful decision making, intense listening, and the profound clarity with which she creatively responds – all within the immediate moment. She maintains a deeply-rooted understanding of both formal and spontaneous composition and the serendipitous communication and sharing that takes place during our performances has always been most joyful and fulfilling.” For her part, Crispell says of Sorey: “From the beginning, I felt a strong sense of communication with Tyshawn, a shared sense of orchestration, color, texture, rhythm, thematic development- improvisation and spontaneous composition.” Their performance on October 21, 2018, The Adornment of Time, is their third performance together. The music unfolded in a completely dark hall but for two dim lights shone on the performers. The packed house at The Kitchen was completely still, enraptured by what was unfolding in front of them. The music is freely improvised; nothing was discussed or determined beforehand, and according to Crispell, “it simply developed in a logical, intuitive way based on shared sensibilities – a meeting of two spirits on a path of sound.” Starting off as a contemplative exploration of space and fragile silence, what follows is a conversation between two master improvisers with no leader, no follower, and no hierarchy. The work feels compositional, with a distinct form that magically unfolds, with quiet tension building to what feels like inevitable eruption. Together, Sorey and Crispell scale the heights of spontaneous artistic invention.