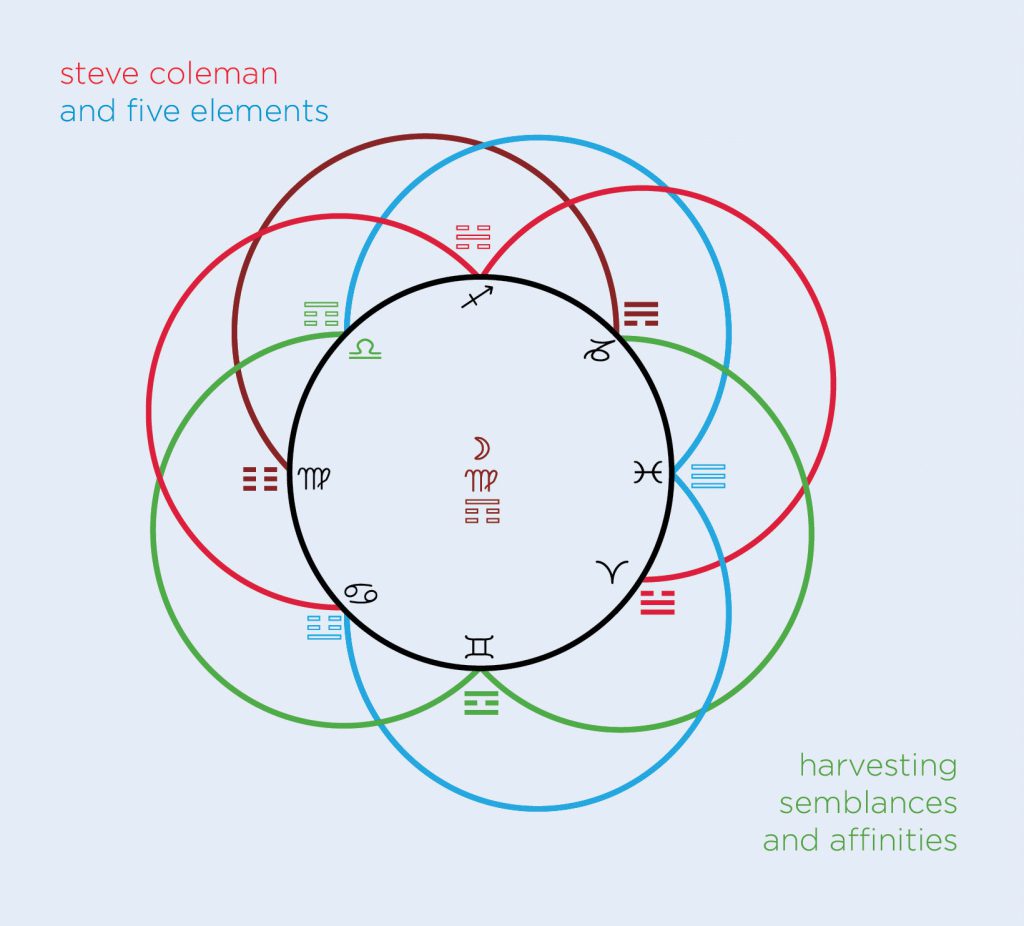 “Undeniably introspective, this is nonetheless music with an extrovert muscularity and stark physicality that would make it hard to ignore in performance. ”
BBC

“Filled with cantilevered rhythms, intertwining melodies and oblique harmonies, Harvesting Semblances and Affinities is one of the strongest albums of Coleman’s career and compelling proof of his continued importance in the development of contemporary jazz.”
All About Jazz

“…he has quietly influenced generations of musicians; his ideas, once viewed as offbeat and inaccessible, have become crucial to the musics contemporary language. Because of this his forthcoming CD, Harvesting Semblances and Affinities (Pi), sounds fresh and vital while also of a piece with its time and place.”
Jazz Times

Pi Recordings is proud to welcome the influential alto saxophonist and composer Steve Coleman to the label with Harvesting Semblances and Affinities, his first release on an American label in nine years and his first new release in almost four years. Coleman was the key proponent of M-Base, which has done its part to push modern jazz to ever greater levels of rhythmic and compositional complexity. Many of his early collaborators in that movement, such as Greg Osby, Cassandra Wilson, Geri Allen, Marvin Smitty Smith and Robin Eubanks have gone on to great acclaim. His influence can also be found in a whole generation of younger jazz artists, including musicians on Pi like Vijay Iyer, Rudresh Mahanthappa, and Steve Lehman.

Coleman’s music, based on a lifetime of travel and research into the music of the African diaspora jazz, blues, Cuban, funk, R&B, hip hop, African, Brazilian, along with Indian and Indonesian defy easy definition. Much of his work is distinguished by its complex, constantly shifting rhythms that convey a fundamental sense of groove. This effect is not just carried out by the rhythm section; it is also found in the intertwining horns lines that weave a pattern of contrapuntal polyphony. Coleman’s compositions are made up of many layers, all constantly mutating, coming and going without simple resolution.

All of the compositions on Harvesting Semblances and Affinities are originals, except for “Flos Ut Rosa Floruit”, with a medieval Latin spiritual text, which was composed by the renowned Danish composer Per Nørgård. Some of the material is inspired by the work of Ramon Llull, a Majorcan mystical philosopher who worked with combinations of symbols representing universal truths, based on intuitive insight and observation of nature. Like Llull, Coleman is a true polymath, and his music has long been influenced by his study of physics, astronomy, numerology and patterns found in nature. He had been working on a musical version of this approach for some time, but was able to further develop this concept during his month-long curatorial residency in 2006 at The Stone, the New York performance space. The music on this release is the direct result of those explorations.

Harvesting Semblances and Affinities features Coleman’s band Five Elements, a shifting group of musicians, many of whom have worked with Coleman for years. The band features Coleman on alto sax, Jonathan Finlayson on trumpet, Tim Albright on trombone, Thomas Morgan on bass, Tyshawn Sorey on drums and Jen Shyu on vocals. Completely defying the traditional role of jazz singing, Coleman puts Shyu’s voice right into the front-line mix, demanding the rhythmic incisiveness and tonal clarity of a horn. Her vocals with its precise and beautifully nuanced articulation bring an emotional element to this complex and cutting-edge music while pushing the possibilities of jazz singing into new territory.